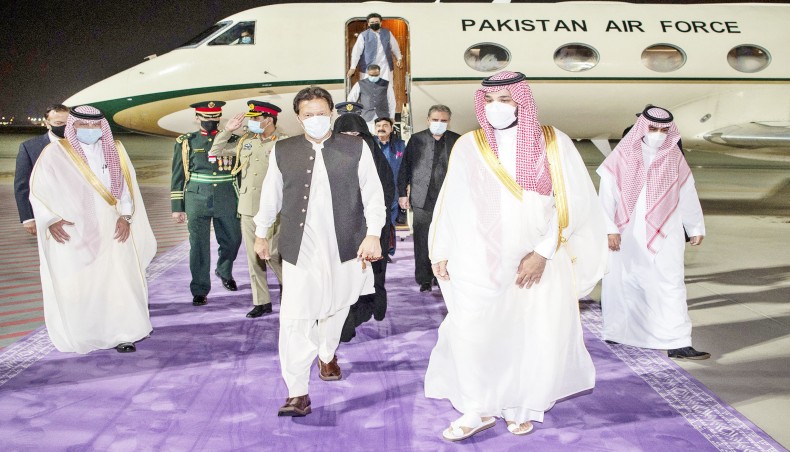 Saudi Arabia and longstanding ally Pakistan signed several agreements Saturday and vowed to reset ties strained by months of disagreement over policy on the Kashmir dispute.

On his seventh visit to the wealthy kingdom since his 2018 election, Pakistani prime minister Imran Khan was given a warm welcome by Saudi officials in the western coastal city of Jeddah.

He was greeted by Saudi Arabia's de-facto ruler Crown Prince Mohammed bin Salman at the airport, before holding talks with Saudi officials at Jeddah's Al-Salam Palace.

‘They affirmed the depth of relations between the two brotherly countries and underscored the importance of expanding and intensifying aspects of bilateral cooperation and coordination,’ a Saudi statement said.

Although the kingdom was the first foreign country Khan visited after taking office, Riyadh appeared frustrated with Islamabad last year.

In a sharply worded statement in August, Pakistani foreign minister Shah Mahmood Qureshi called on the Saudi-based Organisation of Islamic Cooperation to convene a high-level meeting on Kashmir.

The call raised eyebrows in Riyadh, where it was widely seen as a warning that Pakistan was preparing to call for a session outside OIC auspices.

Saudi Arabia prides itself on its role as guardian of Islam's holiest sites and is particularly sensitive about any move that might undermine its leadership of the 57-member pan-Islamic body.

And while the wealthy nation has supported Pakistan with billions of dollars in aid and loans in recent years, observers say the kingdom is also keen not to upset India, a key business partner and importer of Saudi oil.

The kingdom recalled $1 billion of a $3 billion loan to cash-strapped Pakistan, and an expired multi-billion-dollar oil credit facility to Islamabad has not been renewed, a diplomatic source said in September.

Prior to that, Pakistan rebuffed calls to send ground troops to support the troubled Saudi-led military campaign against Yemen's Huthi rebels.

But Khan's visit appeared to have restored cooperation between the two Islamic countries that are both heavily engaged in the ‘war on terror’ which requires effective intelligence sharing.

‘The two sides stressed the need for concerted efforts by the Islamic world to confront extremism and violence, and reject sectarianism,’ the Saudi statement said.

They also agreed two memorandums of understanding on combating drug trafficking, and on financing energy, water and  infrastructure projects.

‘During the meeting, it was agreed to further strengthen, deepen and diversify the existing bilateral political, economic, trade, defence and security ties,’ a Pakistani statement said.

‘The talks were marked by exceptional cordiality and a commitment to fortify the upward trajectory in the bilateral relationship,’ it added.

Pakistan has close links with Saudi Arabia, with more than 2.5 million of its nationals living and working in the kingdom, but it also maintains close ties with Iran and represents Tehran's consular interests in the United States.

For decades, Pakistan has tried to balance its strong relationship with Saudi Arabia and its ties with Iran, with which it shares a near 1,000-kilometre border.

In 2019, Khan travelled between Saudi Arabia and Iran in a bid to calm animosities between the rival Muslim powers.

His visit to Jeddah comes as Saudi Arabia and Iran hold secret talks in Iraq, the first significant effort to defuse tensions since the regional powers cut ties in 2016 after Iranian protesters, infuriated over the kingdom's execution of a Shiite cleric, attacked Saudi diplomatic missions.

‘The kingdom is keen to further strengthen relations between the brotherly countries as well as enable broader economic cooperation.’