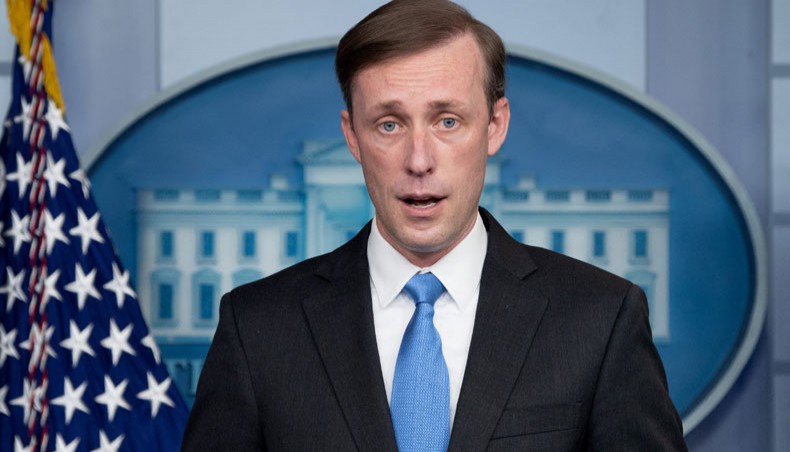 In this file photo US national security adviser Jake Sullivan  speaks during a press briefing on February 4, 2021, in the Brady Briefing Room of the White House in Washington, DC. -- AFP photo

The United States, Japan and South Korea showed a united front on Friday on concerns about North Korea’s nuclear and missile programs as president Joe Biden completes a review on the way forward.

Jake Sullivan, Biden’s national security advisor, held a rare in-person meeting jointly with his counterparts from South Korea and Japan, Suh Hoon and Shigeru Kitamura, at the US Naval academy in Annapolis, Maryland.

The three officials said in a joint statement that they ‘shared their concerns about North Korea’s nuclear and ballistic missile programs’ and promised ‘concerted trilateral cooperation towards denuclearization.’

‘They agreed on the imperative for full implementation of relevant UN Security Council resolutions by the international community, including North Korea, preventing proliferation and cooperating to strengthen deterrence and maintain peace and stability on the Korean Peninsula,’ the statement said.

Addressing other key priorities for Biden, the security officials also discussed the fights against COVID-19 and climate change, and ways to restore democracy in Myanmar.

The meeting came as a review by the Biden administration on how to deal with North Korea is in its final stages, following Donald Trump’s unusually personal diplomacy with strongman Kim Jong Un.

The former president held three meetings with Kim, with whom Trump said he ‘fell in love,’ in a diplomatic overture that eased tensions but did not lead to a permanent agreement.

Biden has sharply criticised Trump’s meetings, saying he legitimized one of the world’s most ruthless leaders, but has also said he is open to diplomacy.

Biden administration officials are widely expected to support a resumption of lower-level talks rather than high-stakes, high-drama summits.

Biden has also warned North Korea of consequences for violations of UN Security Council resolutions after Pyongyang recently tested what US officials judged to be ballistic missiles.

A US official said Sullivan was also speaking to Japan and South Korea about the global shortage of semiconductors, as supply chains have been disrupted by the COVID-19 pandemic.

The lack of semiconductors has forced some automakers to curtail production and appears to be spreading to a wide range of electronic items.

The Annapolis talks mark rare in-person diplomacy for the Biden administration amid the pandemic and Sullivan’s first trilateral since taking office.

On a range of issues such as facing a rising China, Biden has put a priority on rallying allies including Japan and South Korea — which, despite their respective treaties with Washington, have historically tense ties with each other.