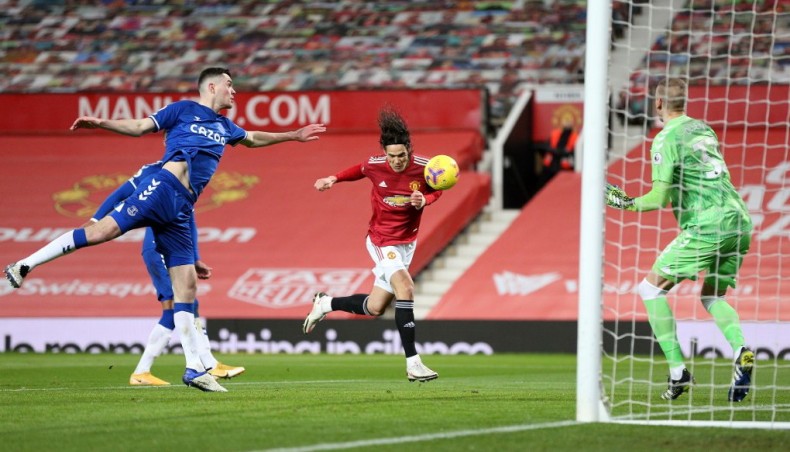 Manchester United manager Ole Gunnar Solskjaer said his side should not be considered Premier League title contenders after twice blowing the lead to draw 3-3 at home to Everton on Saturday.

Victory would have pulled United level on points with leaders Manchester City, but they have now won just one of their last four games to allow their local rivals to open up a commanding advantage at the top of the table.

City enjoy a two-point lead but also have two games in hand over United, the first of which comes away to defending champions Liverpool on Sunday.

‘We're not talking about winning titles, this team has come a long way,’ said Solskjaer, who side finished 33 points behind Liverpool last season.

‘We shouldn't be considered as title chasers. That's one for you (the media). We've got to get better as a team and see where we end up.

‘Going forward we were very good, but we need to stop conceding easy goals.’

Everton's late show extends their unbeaten run on the road to seven games and moves Carlo Ancelotti's men back up to sixth, three points off the top four.

Ahead of the game, the Munich air disaster -- in which seven United players were killed 63 years ago -- was remembered with wreaths laid by both captains.

A slow start followed that sombre note, but the match burst into life after Edinson Cavani's excellent movement created space for the Uruguayan to head home Marcus Rashford's pinpoint cross at the far post on 24 minutes.

Ancelotti cut a frustrated figure on the touchline during the first-half as his side constantly played themselves into trouble rather than seeking out the pace of Richarlison and Dominic Calvert-Lewin on the counter-attack.

‘We were a little bit shy in the first-half,’ said Ancelotti.

‘We had the opportunity in counter-attack in the first-half, but we were not clinical in passing forward.

‘We didn't deserve to lose. I think the draw was fair because the effort and spirit in the second-half was really good.’

The one time a long ball did find Richarlison he nearly caught out David de Gea with an audacious effort from a narrow angle.

United were dealt a blow six minutes before the break when Paul Pogba hobbled off with a thigh muscle injury to be replaced by Fred.

Pogba would have been a far better option on the edge of the box when the Brazilian dragged a shot wide moments later.

However, Bruno Fernandes is United's star man from that range and showed why with a sumptuous lobbed effort over Robin Olsen for his 18th goal of the season.

At that stage, Solskjaer's men looked in complete command, but they got a warning of what was about to come in first-half stoppage time when Calvert-Lewin slotted wide when one-on-one with De Gea.

The Spanish goalkeeper should have done much better four minutes after the break when he parried Calvert-Lewin's effort into the path of Abdoulaye Doucoure, who halved the Toffees deficit with a simple finish.

Doucoure also played his part in the equaliser as he picked out James Rodriguez, who produced a classy finish on his trusted left foot to this time give De Gea no chance.

But United benefited from a goalkeeper error at the other end when Olsen, deputising for the injured Jordan Pickford, let Scott McTominay's header from Luke Shaw's free-kick slip through his grasp.

United should have put the game to bed as Rashford lashed wide after rounding Olsen.

And the hosts were punished for that profligacy when Calvert-Lewin pounced on a long hopeful free-kick into the box to slot home his 19th goal of the season for club and country.