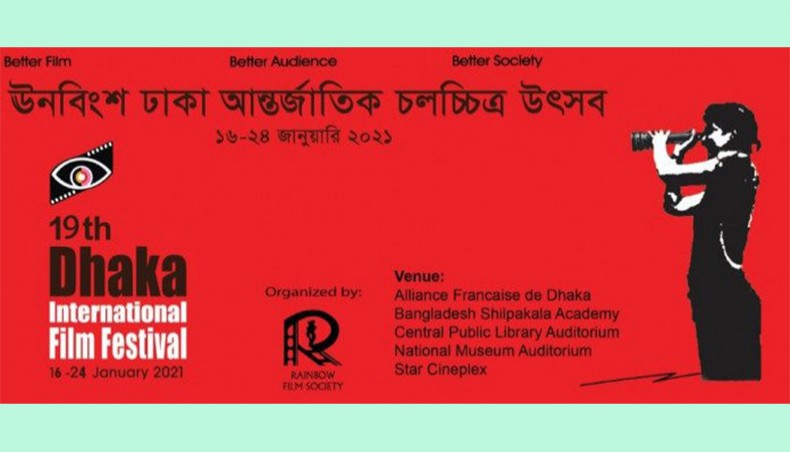 In Bangladesh where the mainstream film industry is lagging far behind from the international standards not only in using technologies but also in content quality, Dhaka International Film Festival 2021 is making the local audience introduced with the world cine-trends and introducing the world with the local independent and promising film-makers, writes Md Mashiur Rahaman

Two hundred and twenty-seven films from seventy-two countries are being screened under ten categories at seven venues and online in this year’s festival. The festival awards will be given in six categories, which are considered as one of the prestigious international film awards given from Bangladesh. All the awards will be given through the judgments of the jury board. No popular choice award is given at this festival.

As given on the festival website, the first category of the festival ‘Asian Film Competition’ has twenty-two selections under its name. Eight films are selected to be screened in ‘Legendary Leaders who changed the world’ category. This section is created new in this year’s festival as the year is being celebrated as Mujib Year in Bangladesh. To show respect to the first president of the nation and as well as to the leaders who devoted their lives to change the world, the festival organisers created this section.

The third-largest number of films under one category is thirty-four and the name of the section is  ‘Women Filmmakers’. In ‘Spiritual Section’ and ‘Children Film Session’ twenty-four and sixteen films are selected respectively. Sixty-eight films got selected in ‘Short & Independent Film Section’, and by number, this is the largest section of the festival.

Film-makers, children, cultural activists, and cinema-enthusiasts from all walks of life are keeping the venues busy. Every morning at the 10 am slot, children along with their parents are enjoying the films from their category for free at Public Library, Shilpakala Academy, and National Museum. At the 10 am, 1 pm and 3 pm slots, students with identification card can also watch the films for free at the venues of National Museum and Public Library. The regular price of the ticket is 50 taka. The price is reasonable for everyone.

As the festival is being held when the COVID-19 pandemic has devastated the order of things, the festival also could not go beyond. Every other seat in the halls is kept empty for the sake of health precaution. Though sometimes when some of the films are attracting the audience more than the seating capacity, the rule of keeping every other seat empty cannot be followed strictly. However, most of the audiences are conscious about the health emergency as they are seen wearing masks.

The venues of the festival are beautifully decorated with colourful flags, banners, and posters themed on film. When we are passing through a kind of dystopian reality for almost a year, the festivity of the venues provides a kind of liberating feeling.

The motto of Dhaka International Film Festival 2019 is ‘Better Film, Better Audience, Better Society’. In Bangladesh where the mainstream film industry is lagging far behind from the international standards not only in using technologies but also in content quality, the festival is making the local audience introduced with the world cine-trends and introducing the world with the local independent and promising film-makers.

The way the festival is connecting Bangladesh with the world will result in inspiring the local film-makers to get creative and diverse with whatever limitations they have.