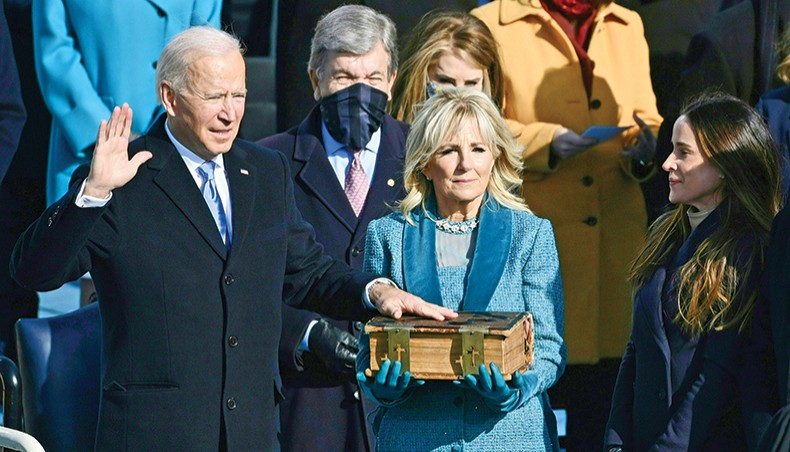 Joe Biden, flanked by incoming US first lady Jill Biden, takes the oath of office during the swearing-in ceremony of the 46th US president on Wednesday, at the US Capitol in Washington, DC. — AFP photo

Joe Biden on Wednesday became the 46th president of the United States with a call to unity, vowing to bridge deep divides and defeat domestic extremism two weeks after a mob attack tried to undo his election victory.

On a frigid but sunny day at the very Capitol building that was assaulted on January 6, Biden swore the oath of office moments after Kamala Harris, who became America’s first woman vice-president, turning the page on Donald Trump’s tumultuous four years.

‘Democracy is precious, democracy is fragile and at this hour, my friends, democracy has prevailed,’ Biden said before a National Mall that was virtually empty due to the ultra-tight security and a raging COVID-19 pandemic that he vowed to confront immediately.

‘We must end this uncivil war that pits red against blue, rural versus urban, conservative versus liberal. We can do this if we open our souls instead of hardening our hearts, if we show a little tolerance and humility and we’re willing to stand in the other person’s shoes.’

‘Together we shall write an American story of hope, not fear, of unity, not division, of light, not darkness. A story of decency and dignity, love and healings and goodness.’

But Trump, who falsely said that he was cheated out of a second term and egged on his supporters before their rampage at the Capitol, broke 152 years of tradition by refusing to attend his successor’s inauguration.

Biden appealed to Trump’s supporters, pledging to listen to all sides after four years of deep polarisation in which Trump belittled minority groups and tried to cast doubts on basic facts.

‘I will be a president for all Americans.’

But Biden confronted head-on the rise of domestic extremism, as witnessed during Trump’s presidency in the Capitol mob, deadly attacks on synagogues and immigrants and a violent march by neo-Nazis in Charlottesville, Virginia.

The United States faces ‘a rise of political extremism, white supremacy, domestic terrorism that we must confront, and we will defeat,’ Biden said.

‘Our history has been a constant struggle between the American ideal that we are all created equal and the harsh ugly reality that racism, nativism, fear and demonisation have long torn us apart.’

At 78, Biden is the oldest president in US history and only the second Roman Catholic president.

Harris, the daughter of Indian and Jamaican immigrants, became the highest-ranking woman in US history and the first person of colour as the nation’s number two.

She and her husband Doug Emhoff — America’s first-ever ‘second gentleman’ — were escorted to the inauguration by Eugene Goodman, a Black police officer at the Capitol who lured the mostly white mob away from the Senate chambers in a video that went viral. Central Washington took on the dystopian look of an armed camp, protected by some 25,000 National Guard troops tasked with preventing any repeat. The Supreme Court reported a bomb threat Wednesday morning.

With the general public essentially barred from attending due to the pandemic, Biden’s audience at the National Mall instead was 200,000 flags planted to represent the absent crowds.

Biden nonetheless brought in star power — absent four years ago with Trump. Lady Gaga, in a poofy dress that was Valentine red, sang the national anthem and Tom Hanks prepared for a televised evening appearance with the new president.

Jennifer Lopez sang a pop rendition of ‘This Land is Your Land,’ often considered the unofficial US national anthem, ending it by exclaiming the words of the pledge of allegiance — a nation that promises ‘liberty and justice for all’ — in Spanish.

Biden, who was vice-president under Barack Obama and first ran for president in 1987, plans to kick off his tenure with a flurry of 17 orders.

Officials said Biden will immediately rejoin the Paris climate accord and stop the US exit from the World Health Organisation and set new paths on immigration, the environment, COVID-19 and the economy.

Biden, who has vowed a major escalation of vaccination against COVID-19, warned of a ‘dark winter’ still ahead from the pandemic that has claimed more than 400,000 lives in the United States, more than in any other country.

‘We’re entering what may be the toughest and deadliest period of the virus,’ Biden said.

‘We must set aside politics and finally face this pandemic as one nation,’ he said, striking a new tone after Trump’s mockery of mask-wearing and business closings meant to halt the virus.

Biden will also end Trump’s much-assailed ban on visitors from several majority-Muslim countries and halt construction of the wall that Trump ordered on the US-Mexico border to stem illegal immigration, the aides said.

Many overseas leaders breathed a sigh of relief at the end of Trump’s hawkish, go-it-alone presidency, with Biden’s team pledging greater cooperation with the rest of the world.

With so many domestic challenges, Biden delved little in his inaugural address into foreign policy, a long time passion for the former senator, but said, ‘We will repair our alliances and engage with the world once again.’