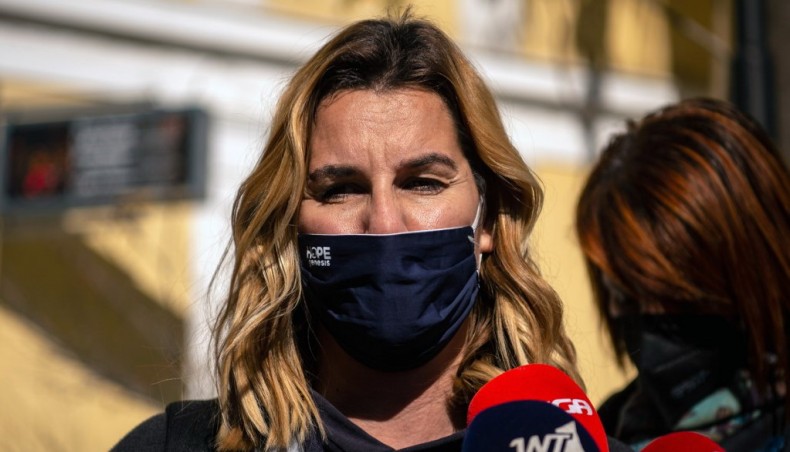 Greek Olympic sailing champion Sofia Bekatorou talks to journalists as she leaves the prosecutor's office after she testified on her sex abuse case in Athens on Wednesday. — AFP photo

An Olympian credited with launching a belated #MeToo awakening in Greece testified Wednesday on her sex abuse case that has encouraged other women to break decades of silence.

‘I hope...that other women and people who have experienced sex abuse will come forward, so that our society will be more healthy, and we'll no longer be afraid,’ two-time Games medallist Sofia Bekatorou told reporters outside the prosecutor's office.

The 43-year-old mother of two said she was 21 when she was subjected to ‘sexual harassment and abuse’ by a senior federation member in his hotel room, shortly after trials for the 2000 Sydney Olympics.

She first spoke to Marie Claire magazine in December before repeating the claim in a state-sponsored teleconference last week.

The sailing federation, which initially called on Bekatorou to supply more details of her allegations before taking action, said in a statement over the weekend that it had ‘immediately requested the resignation’ of its vice-president Aristeidis Adamopoulos.

It said Adamopoulos ‘is allegedly the person named by our Olympian’ in a prior testimony to a prosecutor.

Several other female athletes have stepped forward after Bekatorou's revelation, while nearly a dozen other women have alleged sexual harassment by professors at Thessaloniki's Aristotle University, one of the country's top higher learning institutions.

None of those complaints can be prosecuted as they occurred decades earlier.

The Hellenic Olympic Committee and the government is urging other sex abuse victims to speak out.

‘It is time to uproot the violence of those in power against anyone in a weak position,’ Greek Prime Minister Kyriakos Mitsotakis said in a Facebook post on Saturday.

The HOC has also called for an internal investigation at which Adamopoulos -- who represented Greek sailing on the HOC board -- and Bekatorou are invited to testify.

Adamopoulos, who was also suspended from his position as a prominent member of Greece's ruling New Democracy party in the greater Athens area, denies any wrongdoing.

‘I call on the state, institutions and the media to first respect my family, my children and grandchildren,’ Adamopoulos said in a statement Saturday.
He called Bekatorou's claim ‘false and slanderous.’

The sailing federation, which has been hit with a flurry of resignations and loss of sponsorship, will hold elections in March.

One of Greece's most decorated Olympians, Bekatorou won gold at the 2004 Athens Games and bronze in Beijing four years later.

She was among several top sailors who last year publicly accused the federation of mismanagement and creating a ‘toxic’ environment to bully and control athletes.

Bekatorou on Wednesday said she supported efforts to ‘clean up’ Greek sports.

Womens' groups have long observed that sex abuse in Greece is not only linked to a problematic mentality among men, but that the authorities usually turn a blind eye even when victims speak out.

‘Violence against women is a wonderful thing. If we cross the line, there is a prosecutor,’ another Greek sailing legend, Moscow 1980 bronze medallist Tassos Boudouris said in a social media posting in November.

On Wednesday he told state TV ERT that he was ‘joking’.