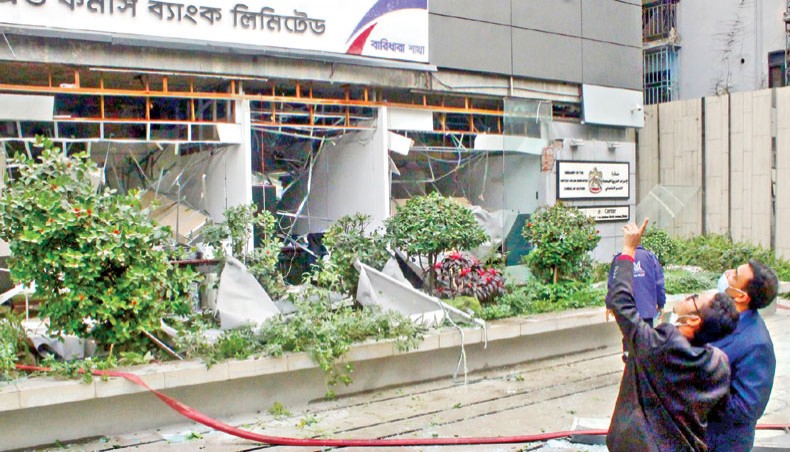 Bystanders look at the office of UAE visa centre at Gulshan in Dhaka on Wednesday afternoon after an air conditioner of the office exploded killing at least one person. — Sourav Lasker

A man was killed and at least six people were injured in an explosion of an air conditioner at UAE visa processing centre in the capital’s Gulshan area on Wednesday.

The deceased was identified as Azizul Haq, a technician, aged about 40.

Azizul was working as a senior technician at Aziz Trade and Engineering Limited.

Azad said Azizul was working at the rooftop of 14-storey Empori Financial Tower in Gulshan-2 to fix central AC when it exploded, leaving him dead on the spot.

Another blast took place later on the ground floor of the visa processing centre, leaving at least six people injured.

Senior police officials said that Dhaka Metropolitan Police bomb disposal unit rushed to the spot, suspecting that there might be a bomb blast before being informed by the firefighters of the blast in the air conditioner.

Vehicular movements at the area had remained suspended for a few hours following the incident.

United Hospital assistant manager for communication Sjjadur Rahman said that the injured were staff at the visa processing centre and their condition was not serious.

Most of them sustained injuries from broken glass and escaped with minor burn injuries.