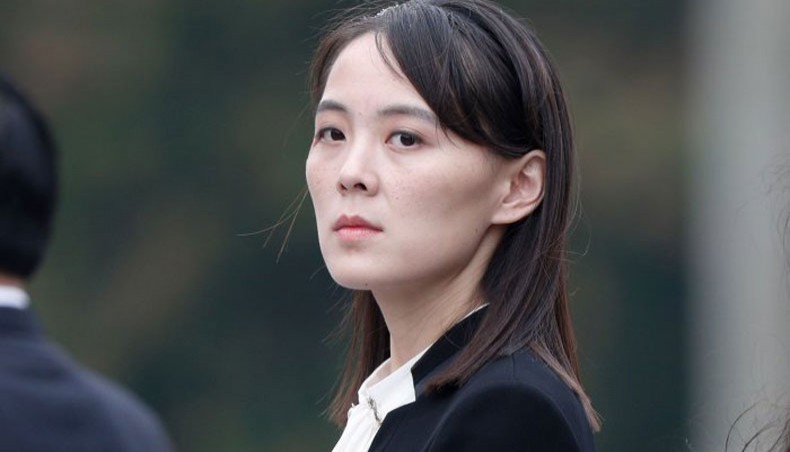 The influential sister of North Korean leader Kim Jong Un slammed authorities in Seoul over their tracking of a possible military parade in Pyongyang at the weekend, the North’s state media reported Wednesday.

‘The southerners are a truly weird group hard to understand,’ Kim Yo Jong, a key adviser to her brother, said in a statement carried by the official Korean Central News Agency.

‘They are the idiot and top the world’s list in misbehaviour.’

Her comments accompanied the end of the North’s ruling party congress, a key political event at which Kim Jong Un pledged to further develop his country’s nuclear capabilities and admitted mistakes over the handling of the economy.

Kim Yo Jong had appeared to suffer a demotion at the meeting, not appearing on the lists of those appointed to the party central committee, after previously being an alternate member.

But the issuing of a statement in her own name is an indication she remains a key player in the North’s diplomacy, having been behind its destruction of a liaison office on its side of the border last year.

On Monday, the South’s military said it had detected ‘signs that North Korea held a military parade related to the congress’ in the middle of the night at Kim Il Sung Square in the capital Pyongyang.

It said it was ‘closely tracking’ the activity, which could have been the ‘actual event or its rehearsal’.

The declaration provoked derision from Kim Yo Jong, who called it ‘senseless’ and a demonstration of a ‘hostile attitude’ by the South.

‘We are only holding a military parade in the capital city, not military exercises targeting anybody nor launch of anything,’ she said, confirming the scheduling of the parade.

The South’s president Moon Jae-in brokered the talks process between Kim Jong Un and US president Donald Trump, but that process deadlocked and the North repeatedly said last year that it had no interest in talking to Seoul.

In his New Year address on Monday, Moon declared: ‘Our determination to meet at any time and any place and talk even in a contact-free manner remains unchanged.’