The end of India’s post-colonial consensus 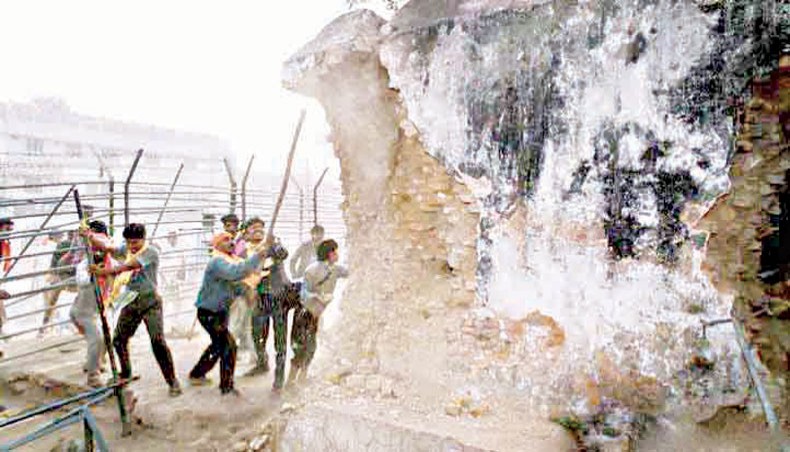 IN THE summer of 2020, right in the middle of the coronavirus lockdown, prime minister Narendra Modi travelled to Ayodhya. This city in central India has been a political hotspot for decades: it is where the new temple to the Hindu deity Ram is due to be built on the site of the Babri Mosque, which was destroyed in 1992 by followers of the Bharatiya Janata Party, the Indian people’s party, which is now in government.

It was only in November 2019 that the supreme court in New Delhi gave the green light for the controversial temple to be built, after a decades-long legal battle between the two religious communities.

Modi came to lay the foundation stone for the Ram temple, for which his party and many Hindu nationalist organisations have been mobilising support for more than 30 years. The building of this temple was one of the central campaign promises in the election to India’s lower house in 2019.

‘This temple will become a symbol of our heritage, our unshakeable faith’, Modi announced triumphantly. He began his political career in the Hindu nationalist volunteer organisation RSS, with the promise to dedicate his life to the fight for a ‘Hindu India’.

The day on which the foundation stone was laid at the supposed site of the god Ram’s birth, had ‘a significance for the country similar to that of Independence Day’, he said. Just as ‘every part of society supported the struggle for freedom’, he said, the building of the temple was founded on the ‘cooperation of people all over the country.’

The RSS — which was founded in the 1920s and modelled on Mussolini’s ‘black shirts’ in Italy — played no role in India’s battle for independence from the British colonial system. It was no match for the two most popular personalities in that movement, who took a very different political line: Jawaharlal Nehru, who later became prime minister of India, and Mahatma Gandhi.

Both had visited Europe and largely shared the anti-fascist attitude of their contacts there. They could not even contemplate the idea of cooperating with the axis powers of Japan, Germany and Italy in their fight against the British colonial masters.

Rewriting history of struggle for independence

INDIAN Muslims, by contrast, played a substantial role in the independence movement. Their share of the total population at that time — when the colonial empire encompassed modern-day Pakistan and Bangladesh — was much greater than it is now. By comparing the construction of the Hindu temple to the struggle for independence, Modi is deliberately excluding the 170 million Muslims in India today.

Two Muslim representatives may have been present at the laying of the foundation stone, but their function was little more than window dressing: the religious minority had most certainly not mobilised support for the building of the Ram temple. Since the Babri Mosque was destroyed 25 years ago, pogroms and lynchings against the religious minority have risen steeply, accompanied by hate propaganda from many BJP politicians.

Modi’s comparison is another, symbolic break with the post-colonial legacy of the independence movement, which regarded the new India as a secular, multi-faith state.

‘There is no comparison between the freedom struggle, which was a unifying struggle in which all sections of the country took part, and the Ramjanmabhoomi [building of the Ram temple] agitation, which was intended to polarise society and has been divisive’, according to a lead article in the Deccan Herald the day after Modi’s speech.

Hindu nationalists have been wanting to appropriate the independence movement for years, to increase their acceptance among the general population. To this end, the ruling Bharatiya Janata Party and its volunteer organisation RSS are cultivating a mythology of victimhood. India, they say, has throughout its history been repeatedly attacked by ‘foreign invaders’ who oppressed the Hindu majority: first the Muslim Mogul rulers and later the British colonisers, who ruled over India until 1948. Gandhi, the icon of the independence movement, is hated by many Hindu nationalists: they hold him partially responsible for the ‘partition’ of the former British Raj territory into India and Pakistan. Gandhi’s murderer, Naturam Godse, also invoked this ideology, accusing Gandhi of having been too indulgent to Muslims.

IT IS no coincidence that the Hindu nationalists and their politics have seen success in the past three decades. They played no significant role in politics before the early 1990s, when India’s population was held together by a post-colonial consensus, consisting among other things of the hope that every person, regardless of caste or religion, would one day have a share in the country’s wealth and progress.

Until that point in time, the Congress Party, which came out of the independence movement, was regarded by many — despite all the corruption and intrigues — as the guarantee of this promise, which remained anchored in the collective consciousness despite all the social injustices.

This consensus was broken by the Congress Party itself: under pressure from the International Monetary Fund and the World Bank, a highly indebted India was forced to open up to the global market and with it, the competition for low-cost manufacturing. It had to deregulate its economy, which meant slashing subsidies for agriculture — still the most important source of income for the country’s population — lowering trade tariffs, and allowing foreign investors into the country.

At the same time, this neoliberal turnaround enabled the Indian elites to enrich themselves more shamelessly than ever. The gap between rich and poor grew ever wider. With their India-wide campaign for the destruction of the Babri Mosque, the Hindu nationalists succeeded in filling this vacuum, by popularising a ‘new’ collective identity.

The British historian Perry Anderson speaks of a, ‘classic reaction of religious compensation’, as ‘the social promises of Congress had faded’. The Hindu nationalists are to some extent the cement that secures power and wealth for the country’s corrupt elites. They suggest to the lower castes that their struggle is a communal one, and channel social dissatisfaction into hatred of other religions and minorities.

RENOWNED historians have challenged the myth of the Ram temple, among them KN Panikkar, who is now a professor emeritus of cultural history at the Jawaharlal Nehru University in New Delhi. If there had been a previous Hindu temple on the site of the Babri Mosque, he argues, then it should appear in the written sources from the 16th and 17th centuries.

But many of these sources instead tell of the Mogul ruler Babur’s tolerant attitude towards other religions. Numerous examples provide evidence that Babur was even considerate enough to deliberately avoid building mosques on sacred Hindu sites. The historian Panikkar dates the myth of the Ram temple to the century before last.

He explains that it is a relatively new assumption that the Babri Mosque was erected in place of a temple, adding that its origins lie in attempts by colonial rulers in the 19th century to rewrite the subcontinent’s history, focussing in the process on the mutual hostility between religious communities.

In this sense, the Hindu nationalists are doubling down on the colonial ‘divide and rule’ strategy, and not continuing the anti-colonial legacy of the independence movement, as they like to claim.

Even if the BJP’s fundamentalist agenda has managed to win them an absolute majority in the Indian lower house twice in a row — something that no other party has achieved for more than 30 years — it is a long way from being able to count on the support of all Hindus. Many continue to regard the BJP with scepticism.

Different religions have lived together on the subcontinent for hundreds of years, and Hinduism’s fundamentally tolerant attitude towards other religions also continues to influence the majority of Hindus.

The election results reflect this fact: the BJP’s success was largely based on India’s first-past-the-post system. Most of the 80 per cent of Indians who are classed as Hindu are not supporters of the BJP: of the 604 million citizens who went to the polls, only a third voted for the Hindu nationalists. But faced with a splintered and weak opposition, that was enough to give them an absolute majority.