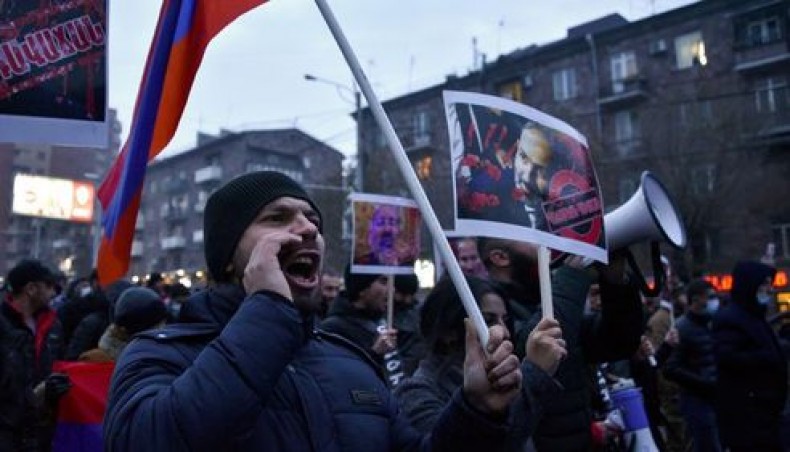 Protesters march through the streets of Yerevan to demand the resignation of prime minister Nikol Pashinyan over a controversial peace agreement with Azerbaijan that ended six weeks of war over the disputed region of Nagorno-Karabakh, on December 14, 2020. -- AFP photo

Azerbaijan and Armenia on Monday announced the start of a prisoner exchange, more than a month after a peace deal was signed ending weeks of fighting over the disputed Nagorno-Karabakh region.

Returns had already begun on Monday, Baku’s state commission on prisoners of war, hostages and missing persons said in a statement, under an ‘agreement on the exchange of prisoners and hostages on an ‘all for all’ basis’.

The commission added that ‘international organisations and the command of the Russian peacekeeping forces’ had helped hammer out the deal with Armenia.

Later Monday, Armenian prime minister Nikol Pashinyan announced the return of some of his own country’s captured troops.

‘Forty-four of our prisoners of war will soon return to Armenia by Russian aircraft,’ Pashinyan wrote on Facebook.

Baku announced separately on Monday the arrest of four Azerbaijani soldiers, two accused of ‘defiling’ the bodies of Armenian soldiers who died in battle and two others accused of destroying tombstones belonging to Armenians.

The men had filmed their actions and shared the videos on social media.

The Azerbaijani prosecutor general said in a statement that criminal probes had been launched into the incidents, calling them ‘unacceptable and contrary to the mentality of the Azerbaijani people’.

The six-week conflict that erupted in September between Armenia-backed separatists and Azerbaijan over Karabakh ended November 10 with a Moscow-brokered peace deal.

The Armenians ceded swathes of territory and Russian peacekeeping troops were deployed to the region.

More than 5,000 people including civilians were killed during the fighting between the ex-Soviet rivals, who fought a war in the 1990s over the mountainous region.