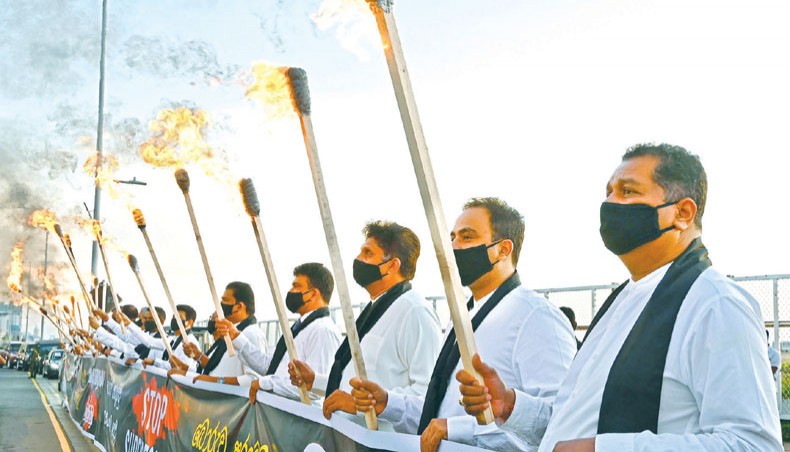 THE initial optimism that accompanied president Gotabaya Rajapaksa’s ascension to the presidency is wearing thin in the face of the seemingly insurmountable problems he has to deal with including the economic crisis and most unexpectedly the COVID-19 spread. But there are also the more traditional issues of abuse of power, corruption and inter-community tensions that are raising their heads. The recent prison riot, which has seen brutality, is what people remember of the past and must not recur under a government that cares for its people regardless of their stations in life or communities. When he won the presidential election in November 2019 there was a great deal of hope that the president was a leader with strong convictions who would immediately take charge and put things right in an efficient manner.

Although the first few months that followed his election saw little in the direction of such positive change, this was attributed to the fact that the new government under him still remained a minority government with a parliament elected in 2015. The dissolution of parliament in March 2019 was followed by decisionmaking by the executive without the check and balance of the legislature. There was anticipation that the change for the better would have to await the general elections. Unfortunately, the COVID-19 pandemic dealt a blow to these expectations by delaying the general elections. It was during this time that disturbing signs began to emerge that little had changed and that the old system was reasserting itself and limiting the scope of the changes that the people so eagerly awaited.

Despite the general elections of August 2020 and the large majority obtained by the ruling party there was another roadblock to president Gotabaya Rajapaksa that needed to be cleared according to the election manifesto of the ruling party. This was the 19th Amendment to the constitution which was a legacy of the previous government and intended to weaken the president’s powers and share them with parliament. So once again it appeared that the president’s hands were tied. The president’s determination to have the 20th Amendment replace the 19th was therefore seen by the majority of people as an indication of his commitment to ensure change for the better by reconcentrating power in the presidency. When the people voted overwhelmingly for president Rajapaksa, they did so in the expectation of a strong leader who would protect the people’s rights.

THE popular desire for a strong leader arose from the failure of the previous government to give the people a sense that it was strong and cohesive and would protect them and the country. Like the present government, that government too was voted into power with high expectations of a corruption-free government that also respected human rights and obtained the support of the international community and investors to propel the country forward in terms of economic development. However, the manner in which the former government was seen as giving in to international pressure, especially on the issue of the war victory and human rights issues related to it, was viewed negatively by a large segment of the population. The inability of that government to protect the people from the Easter bombings and their disastrous human and economic costs made the case very strong for a change of government.

It was in this context that there was a popular expectation that the passage of the 20th Amendment would empower the president to be the protector of the people from those who would exploit the country for their personal benefit, whether local or international. However, starting with the building of new roads in the protected ancient forest of Sinharaja, and the spate of lands in various parts of the country being acquired for private economic usage, the situation in the country is not working out that way. The 20th Amendment of October 2020 has reconcentrated power in the presidency. But this has weakened the system of checks and balances to make it appear that the government leadership wishes to limit the institutional obstacles to doing what it wants to do. There are numerous accounts of the destruction of the environment, including forest land and mangroves, for the economic profit of private interests.

It can now be seen that the country is plunging deeper into political and economic crisis. The legal system is seen to be failing to vindicate human rights and deeply felt religious sensibilities in the case of enforced COVID-19 cremations even in contravention of the recommendations of the Human Rights Commission. The arrest of Shani Abeysekera, the former director of the Criminal Investigations Department, and his imprisonment in conditions in which he has contracted COVID-19 would send a chilling message to police officers about the dangers of pursuing wrongdoers who have political connections. At the same time there has been the acquittal of several government officials on trial for corruption including those involving the misuse of state resources.

The weakening of checks and balances is also seen in the directive ordering the closure of the Public Utilities Commission of Sri Lanka, the electricity sector regulator and the designated regulator for water services. The cancellation or overruling by the presidential secretary of an institution that has been established under an act of parliament sends a very concerning message that other laws should be reviewed by officials outside of parliament and be nullified. This will serve to undermine the powers of parliament and the confidence of the citizenry with regard to the institutions of governance. This needs review to the effect that an act of parliament may not be nullified without the concurrence of parliament to ensure that the system of checks and balances continues.

THE deterioration in inter-ethnic and inter-religious relations taking place at the present time is another serious cause for concern. Ironically, this deterioration is not at the level of the communities on the ground, though it is likely that they too will be dragged into the polarisation unless remedial measures are taken at the national level. The relations between people of different communities at the ground level are neither hostile nor confrontational with regard to each other. However, there is an element of confrontation that is building up between the ethnic and religious minorities and the state. In the case of the Muslim community it is on account of the enforced cremation of COVID-19 victims who have died. In the case of the Tamil community it is on account of the issue of whether they can remember the dead.

The controversies over COVID-19 cremation and memorialising the war dead are now becoming national political issues to the extent of parliamentarians utilising parliament to debate the issues and to discredit one another and to instil fears of future security threats to each side. This has increased the level of ethno-nationalist rhetoric which will increase the polarisation between the communities. This will have its impact on the ground which those who wish to utilise to their advantage even at the cost of social and community peace will seize upon. But this is not a formula for a society that seeks to encourage economic investments by corporate and private investors, local and foreign, which are essential to reach the goal of economic development that president Gotabaya Rajapaksa has set for himself and the country.

The question is how the government will seek to ensure the continuing confidence of the people in its governance and the decisions it takes. Now that the 20th Amendment has been passed into law, president Rajapaksa is best positioned to make the decisions that call for sacrifice but which are fair by all. Although the situation in the country is not working out the way that it was expected to, the majority of people in the rural hinterlands continue to place their trust in the president and in the genuineness of his commitment to change that embraces all citizens. So would the people in other parts of the country if they see that sacrifices are being made all round, and that politically connected elites are not unfairly being enriched at their expense. As Mahatma Gandhi said a century ago, let not their leaders mistrust them, for theirs is a very responsive nature.