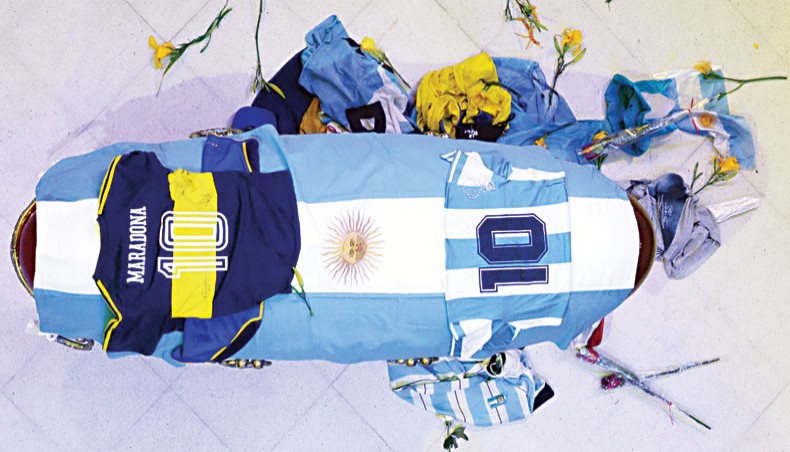 Huge crowds bade a grief-filled farewell to Argentina’s favourite son Diego Maradona before the football legend was buried on the outskirts of Buenos Aires after a chaotic public wake.

The 1986 World Cup winner widely regarded as one of the greatest players in history was laid to rest on Thursday after a ceremony attended by family and close friends in the Bella Vista cemetery.

Maradona, who had battled cocaine addiction for decades, died on Wednesday aged 60, sparking mourning around the world.

‘I thought Diego was immortal, I thought he would never die on us. I feel a terrible sadness for a person who made us so, so happy,’ said 63-year-old bus driver Antonio Avila outside the cemetery.

The peaceful farewell contrasted sharply with the raucous scenes of his send-off in the Argentine capital that seemed somehow in keeping with the player’s tumultuous life.

Riot police fired tear gas and rubber bullets in clashes with stone-throwing fans that briefly threatened to mar the day of mourning.

In Naples, where Maradona was adored for leading Napoli to two Italian titles and putting one over their richer northern rivals, fans held an all-day wake and players took to the pitch for a match wearing his number 10 shirt.

Tens of thousands of people had queued from early morning in Buenos Aires to file past Maradona’s coffin, draped in the Argentine flag, at the presidential palace.

As the day wore on, people queing outside the Casa Rosada grew increasingly impatient, and some took over a courtyard inside, where they chanted slogans, forcing officials to move Maradona’s coffin to another room as a security precaution.

Later, the hearse bearing Maradona’s coffin rolled through the gates of the presidency building and into the streets of Buenos Aires.

Fans crowded onto roadsides and highway bridges as the funeral cortege sped towards the western outskirts, surrounded by police outriders with sirens blaring and pursued by TV crews.

The outrageously skillful Maradona, widely remembered for his ‘Hand of God’ goal against England in the 1986 World Cup quarter-finals, died of a heart attack on Wednesday while recovering from brain surgery.

‘He was the best in the world, we’re going to miss him and his death broke our souls,’ said Diego Armando Cabral, a 29-year-old bricklayer in Buenos Aires who was named after the footballer.

Brazilian legend Pele, 80, said he hoped they would one day ‘play together in the sky.’

Still the tributes rolled in, with Tottenham manager Jose Mourinho, a former boss of Chelsea, Real Madrid. Inter Milan and Manchester United, recounting how Maradona would call him to offer support after defeats.

‘He had a big, big, big, big heart,’ Mourinho told BT Sport. ‘That’s the guy I miss, because his football we can find every time we miss him, if we Google we will find it. But Diego, no.’

Maradona was born into poverty in Lanus, south of Buenos Aires, on October 30, 1960.

In his most infamous international match, he used his fist to score past England goalkeeper Peter Shilton in the 1986 World Cup quarter-finals in Mexico City. Maradona memorably described the goal as ‘a little with the head of Maradona and a little with the hand of God.’

Minutes later he swerved through six English defenders from the halfway line to score a memorable solo second that has been honoured as FIFA’s ‘Goal of the Century.’

The two goals embodied all that was best and worst about Maradona.

His career was crowned by his performances at that World Cup, when he captained Argentina to glory and sparked wild celebrations at home.

Maradona also inspired Argentina to the 1990 final, only for West Germany to take their revenge. At the 1994 World Cup, he failed a doping test and was drummed out of the tournament in disgrace.

As his playing days ended, his lifestyle began to take a toll. He was hospitalised three times in the last 20 years for serious health issues.

He immediately had the gritty city of Naples under his spell, leading the club to their only two Italian league titles in 1987 and 1990. The mafia befriended him, and supplied drugs.