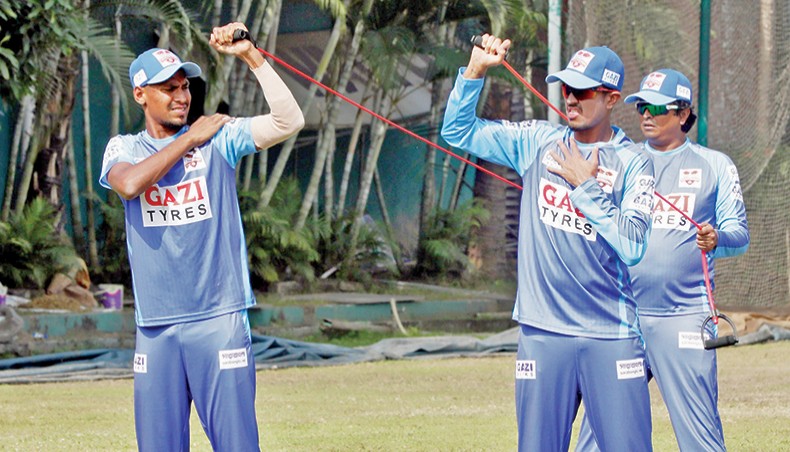 Gazi Group Chattogram skipper Mohammad Mithun said that he is relying on team effort rather than individual brilliance to win their opening match of the Bangabandhu Twenty20 Cup against Beximco Dhaka today.

The match will start at 6:30pm after the completion of the Gemcon Khulna and Minister Group Rajshahi match, slated to begin at 1:30pm.

Chattogram will start their tournament against Dhaka, who will be desperate for a win after suffering a narrow two-run defeat in the tournament-opener, but Mithun believed that his team has enough firepower to subdue any side.

‘I am not pinning my hopes on any particular individual; rather I am hopeful about the entire team. I know what Liton [Das] and Soumya [Sarkar] can do. On any given day any one of them can take the team home single handedly,’ Mithun told reporters on Wednesday.

‘Anyone can win it for us; it could be me or even Mustafiz [ur Rahman] with the bat hitting a six in the last ball. Every player is equally important for me,’ he added.

Chattogram’s bowling department will be spearheaded by two left-arm quicks, Mustafiz and Shariful Islam, a prospect that excited Mithun.

‘We all know about Mustafiz, his ability. Shariful is highly talented, good pace and control over the ball.’

In the first match of the day at the Sher-e-Bangla National Stadium in Mirpur, winners of the two opening day matches, Rajshahi and Khulna, will lock horns to earn a straight second win and move up to the top of the points-table.

On Tuesday, Rajshahi escaped with a victory over Dhaka thanks to off-spinner Mahedi Hasan, who defended nine runs in the final over, while Khulna won on the back of the final over bludgeoning of Yasir Ali, who smashed four sixes in the 20th over to snatch the victory from Fortune Barishal.