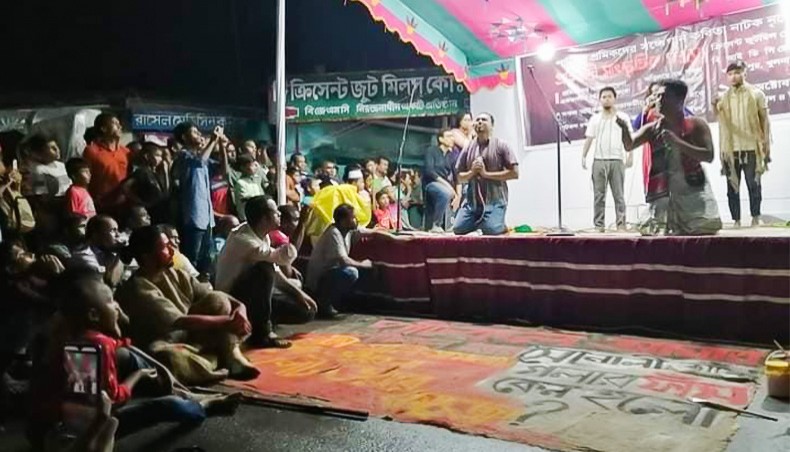 On October 23, a cultural programme was organised in support of jute mill workers on-going struggle against the government’s decision to close down state-owned mills. Law enforcement agencies, in the name of maintaining law and order, used various form of intimidation to foil the programme. Sarwar Tushar reports from the event

On the last 23 October, a cultural programme in support of the jute mill workers, workers who have been protesting against the sudden shut down of all the remaining state-owned Jute mills in July. The announcement of shut down came at a time when the working class was already struggling survive the pandemic hit economy. The programme was organized at mill area in Khalishpur, Khulna. Several song and theatre activists from Dhaka went there to participate in the event. A few days before the programme, members of the Detective Branch in Khulna started harassing the local organisers over the phone. They wanted to 'know' what song would be sung and what kind of play would be staged in the programme! They demanded that the script of the play had to be submitted to the DB office. With all these questions, supposedly to ensure law and order situation, left the organisers under constant pressure.

This was not all. Upon receiving the script of the play, the authority held a meeting, reviewed the script and edited out the dialogues from the play that they thought was ‘inappropriate’ and gave a censored script to the organisers with instructions on what lines should be deleted and what should be added. Police also learned from a Facebook post that a poem based on the plight of the jute mill workers would be recited at the event. Then they also kept pressuring to submit the poem before being finally recited at the stage. In the end, organisers did not give in, they performed the words of their own defying their ‘instructions.’ On the morning of October 23, just a few hours before the programme, local police kept ringing the organisers that the new script accommodating their instructions must be submitted to them, but the organisers chose not to give in.

A large number of riot police were deployed around the stage. When the programme started at 5:00 pm, the law enforcement agency asked the organisers to end the programme by 6:00 pm. At one point, when a student of Barisal University returned to the audience after singing an anti-fascist song written by him, a concerned police officer went there to collect his name and address, and asked him to email the lyrics of his song. The air was filled with tension. It was uncertain whether the theatre group will be able to perform or now. Finally, it was decided that the stage would be set for the play during a song and the theatre group will enter the stage without an announcement. The group began the performance, and a large number of workers stood around the stage to ensure that the play goes uninterrupted.

Due to the indomitable courage and strategy of all the artists, performers, activists and local organisers that evening, and the constant cooperation and support of the jute mill workers, the event went smoothly despite all the intimidation.

The harassment did not end there. At night, the DB police without a warrant intruded the house of a local organiser, Ruhul Amin. It was rather late at night. They harassed everyone present in the house. Members of the law enforcement agencies took pictures and recorded video of the two women organisers and theatre activists present at that house in a separate room. They even verbally assaulted the women which, according to those present at the scene, amounted to sexual harassment. The DB officers however apologised to the local organisers when the organizers lodged a complaint with the Khulna Deputy Commissioner of Police.

What the members of the law enforcement agencies did was an assault on freedom of expression and our collective right to dissent. They had no authority to censor a play or demand that the poem be submitted to the police before recitation. We must take a strong stance against such a form of intimidation and harassment. They cannot randomly raid a house without a warrant, let alone verbally assaulting those present in the house.

Apart from the physical torture by the police during a movement, repression also takes place in various forms. In the movement of jute mill workers in Khulna, the police oppression and surveillance are happening in various forms. Our situation is so deplorable now that these 'soft' tortures have begun to seem 'normal' to us in the threshing floor of physical torture.

Sarwar Tushar is a young political commentator and organiser of Rashtrachinta.