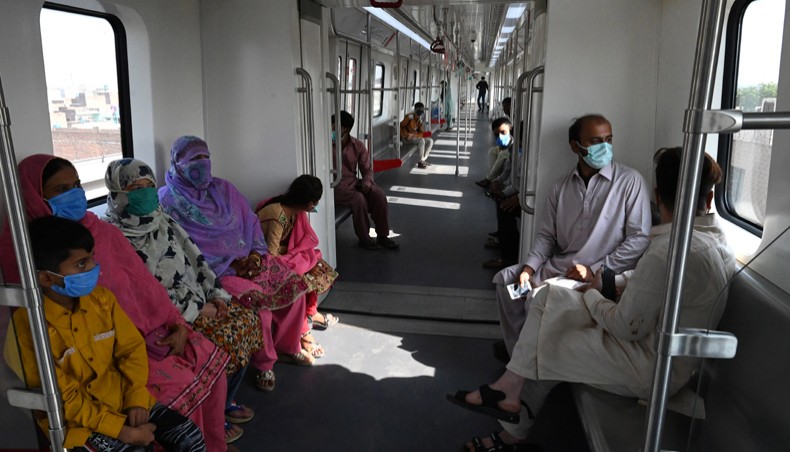 Passengers ride in a newly built Orange Line Metro Train, a metro project planned under the China-Pakistan Economic Corridor, a day after an official opening in the eastern city of Lahore on October 26, 2020. —AFP Photo

Stretching 27 kilometres and dotted with more than two dozen stations, the Chinese-backed ‘Orange Line’ will cut travel time across the perennially congested city in Punjab province from two-and-a-half hours by bus to 45 minutes on the metro.

‘This project will provide world-class facilities to the public in Lahore,’ Punjab’s chief minister Usman Buzdar said during an inauguration ceremony Sunday.

The line’s opening follows years of delays, political controversies, and growing questions about the massive amount of debt Pakistan has taken on in recent years through Chinese-financed infrastructure projects.

Despite the delays and controversies, authorities are hopeful the new line will reduce traffic congestion in the city of more than 11 million, where commuters frequently spend hours in cars or buses daily due to grinding traffic.

Officials expect about 250,000 people will be able to travel on the metro system daily. Much of Pakistan suffers from poor public transport infrastructure making daily commutes in urban areas difficult and costly for many low-wage workers.

Beijing has been steadily pouring cash into Pakistan, investing more than $50 billion as part of the China-Pakistan Economic Corridor that has upgraded infrastructure, power and transport links across the country.

Chinese news agency Xinhua praised the opening of the metro line, calling it the beginning of ‘a new stage for the South Asian country in the public transportation sector’.