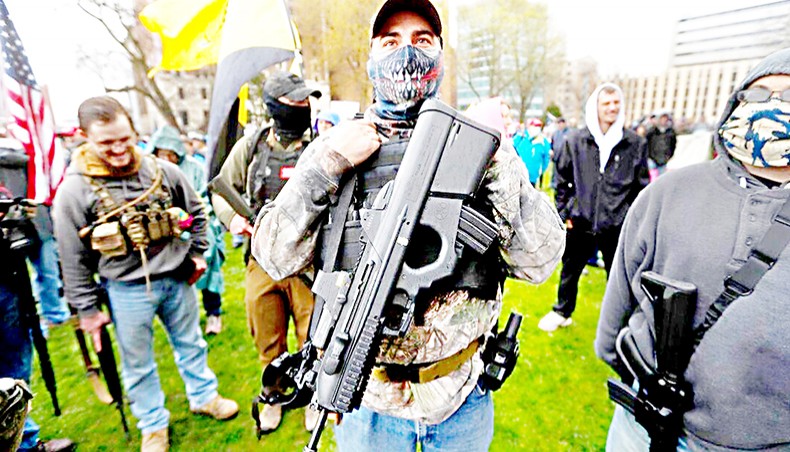 A protester carry his rifle at the state Capitol in Lansing, Michigan. — The Associated Press/Paul Sancya

THE 2020 US election may be the most consequential election of the 21st century, not only for the US but also for the whole world. The US has moved far right of the centre in its political philosophy and internal policies. By classifying the Trump administration as a ‘far-right’ administration I mean an administration that is very close to a neo-fascist state and trying to establish white-supremacist social structure.

If we analyse the backdrop of this election — impeachment of the POTUS, politically motivated racial polarisation by the POTUS, police brutality, public health crises due to COVID-19, economic recession because of the wrong policies of the administration, and culture war to revise US history — it would become clear why I am making such assertions.

This president is a liar, misogynistic, vulgar, and a conman. And he has made the US a laughing stock around the word, but none of these are significant if we compare them with his ‘America first’ policy.

There are things that are happening in this country that are not known around the world and they are dangerous for the US citizens as well as all the countries of the world, including the United Nations, World Health Organisation, and North Atlantic Treaty Organisation.

First of all, I would like to emphasise the obvious point — the COVID-19 pandemic and the response from the US leadership, particularly the inaction, lies, and deceptions of the president of the United States are without precedence and dangerous. So far more than 200,000 people have died in the US and 20 per cent of the world’s infected people are in the US now. And as of this Monday, 36 states reported that the infection rates are rising at a faster rate than what we saw in the beginning of the year. This would be the second wave of the pandemic, but the POTUS is not at all concerned about the rising death toll.

The most dangerous thing is the president’s depraved indifference to humanity. In January this year, Trump discussed with Bob Woodward the dangers of COVID-19, but he kept it a secret from all and pushed to open the country knowing that thousands of people would die and people have died while he went to play golf.

Michigan’s Democratic governor Gretchen Whitmer said that president Donald Trump was fuelling domestic terrorism a day after his criticisms of her COVID-19 mitigation efforts during a rally in the state spurred supporters to chant ‘lock her up!… The president is at it again, and inspiring and incentivising and inciting this kind of domestic terrorism. It is wrong. It’s got to end,’ Whitmer said these remarks during an interview on NBC’s ‘Meet the Press.’

Although it may seem too little too late, Republican politicians are abandoning the POTUS and starting to criticise him in uncompromising language. The Republican senators in this group are Ben Sasse of Nebraska, Ted Cruz of Texas, and Lindsey Graham of South Carolina. Ben Sasse said: ‘I’m worried that if president Trump loses — as looks likely — that he’s going to take the Senate down with him,’ Sasse said in a conference call with constituents last week, according to audio first reported by the Washington Examiner. ‘I’m now looking at the possibility of a Republican bloodbath in the Senate.’

This POTUS has been a complete failure in managing all governmental matters. The only thing he has accomplished is dividing the country into two polarised groups. One of these groups is the white-supremacists neo-fascists and the others are citizens who believe in the constitution. How do we know that the POTUS is in favour of the white-supremacists? Because out of his infinite wisdom and sheer genius, he has expressed his opinions on a daily basis through his tweets. His first declaration came in the wake of the murder of a woman in the hands of the neo-fascist car driver in Charlottesville, Virginia in August 2017. The POTUS said: ‘There were good people on both sides.’ In the last four years, he has never condemned these right-wing groups. On the contrary, he has patronised them and re-twitted their messages to his followers.

During the first presidential debate when the moderator asked POTUS to condemn the white supremacist and neo-fascists, he said: ‘I ask them to stand back and stand by.’

On October 8, we were informed by Federal Bureau of Investigation and local police that they have captured 13 members of a neo-fascist white supremist group that was planning to kidnap the Democratic governor of Michigan Gretchen Whitmer and most likely kill her.

In late April this year, when the COVID-19 was spreading for the first time, many states went into locked-down mode, including New York, to prevent the spread of the virus and to save the citizens. In those days the POTUS sent his armed followers to occupy the State Building and threaten the Michigan legislators and civil servants. Michigan is an open carry state where citizens are allowed to carry guns if they have license. During this occupation of the state Capitol by his followers, the POTUS sent a message via twitter that said; ‘Liberate Michigan.’

On October 17, during one of the recent rallies the POTUS again joined his followers and publicly chanted with the crowd: ‘Lock her up…;’ directly supporting the kidnappers. To this move of the POTUS, governor Gretchen Whitmer said that the POTUS is condoning the actions of the kidnappers and he would be personally responsible if anything happened to her.

If Trump wins this election the US will no longer remain a democratic country, rather it would become a neo-fascist country and Trump would unleash his wrath across the globe. He also claimed that there would be civil war if he loses the election. By all accounts, Trump is the one who should be ‘locked-up.’

Dr Ali Manwar worked as an analyst with the US Federal Government. He is a Fulbright scholar. He taught at Syracuse University, Siena College, and John Jay College (City University of New York).