Liverpool face up to long season without Van Dijk 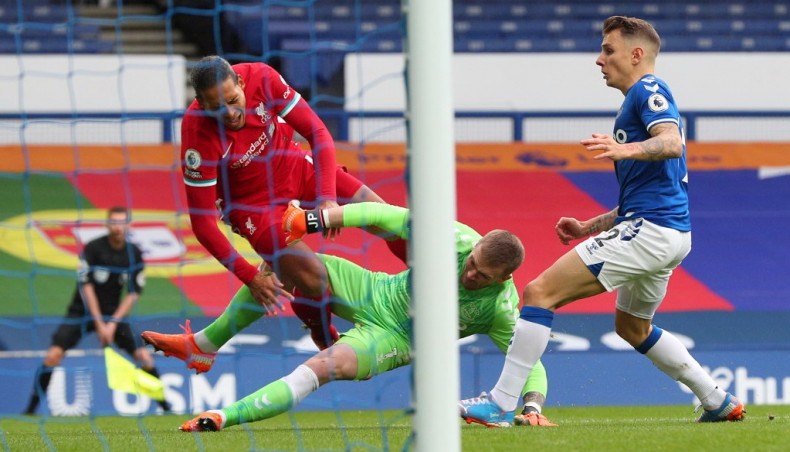 Liverpool's Premier League title defence was rocked on Sunday when the club confirmed key defender Virgil van Dijk has suffered knee ligament damage amid reports the Dutchman could miss the rest of the season.

Van Dijk, who will require surgery, hobbled off after a shocking challenge from Everton goalkeeper Jordan Pickford in a 2-2 draw in the Merseyside derby on Saturday.

‘Van Dijk was required to be substituted and further assessment on the injury has revealed an operation will be needed.

‘No specific timescale is being placed upon his return to action at this stage.’

It will at the very least be months before Liverpool's talismanic presence at the back returns, leaving Jurgen Klopp with a major problem to solve to keep the Reds' season on track.

The Netherlands captain is also at risk of missing the delayed Euro 2020 next June.

Van Dijk struck an upbeat note in a statement released on social media, saying: ‘I'm now fully focused on my recovery and will do everything I can to be back as quickly as possible.

‘Despite the obvious disappointment, I'm a firm believer that within difficulty lies opportunity,’ he continued, adding: ‘I'm going to make sure I return better, fitter and stronger than ever before.’

Van Dijk has been pivotal to Liverpool's resurgence since making a then world record £75 million ($97 million) move for a defender from Southampton in January 2018.

The 29-year-old has started the last 94 league games to bring a defensive solidity that was lacking during Klopp's first two years at Anfield.

Since then Liverpool won the Champions League in 2019 and ended a 30-year wait to win the Premier League earlier this year.

‘You look at it now and think can Liverpool win the league without Van Dijk there?’ former Liverpool defender Jamie Carragher told Sky Sports.

‘Every team that has aspirations of winning the league has three or four players that if one of those players is missing, no matter how good your manager is, how big your squad is, you can't cover for them. They are that outstanding.’

With the summer transfer window only just closed, Klopp will have to wait until January to bolster his now threadbare options at centre-back.

Joel Matip and Joe Gomez have consistently struggled with injuries themselves. Midfielder Fabinho could be drafted into defence.

‘I think they certainly have to go into the market in January. Not just because of Van Dijk's injury, Liverpool were weak in that area anyway,’ added Carragher.

There are parallels with the serious knee injury that Manchester City centre-back Aymeric Laporte suffered at the start of last season.

Without the Frenchman, City's title defence imploded paving the way for Liverpool to win the title by 18 points.

The sidelining of Van Dijk is compounded by the absence of goalkeeper Alisson Becker with a shoulder injury.

Without the Brazilian, Klopp's men have conceded nine times in their last two matches, including a 7-2 humiliation at Aston Villa.

The loss of Van Dijk's dominant aerial presence was obvious as Everton scored twice from headers to come from behind in a contentious derby at Goodison Park.

That left the Reds three points behind their city rivals at the top of the table.

But they remain ahead of the rest of the expected title challengers with none of the Premier League's 'big six' enjoying a perfect start to the season.

Their campaign begins away to Ajax on Wednesday and recent arrival Thiago Alcantara is also an injury doubt for the trip to Amsterdam.

Klopp was not happy with another reckless Everton challenge that earned Richarlison a straight red card for taking out the Spanish international.

Thiago was able to complete the game, but will have scans to discover the extent of a knee injury.