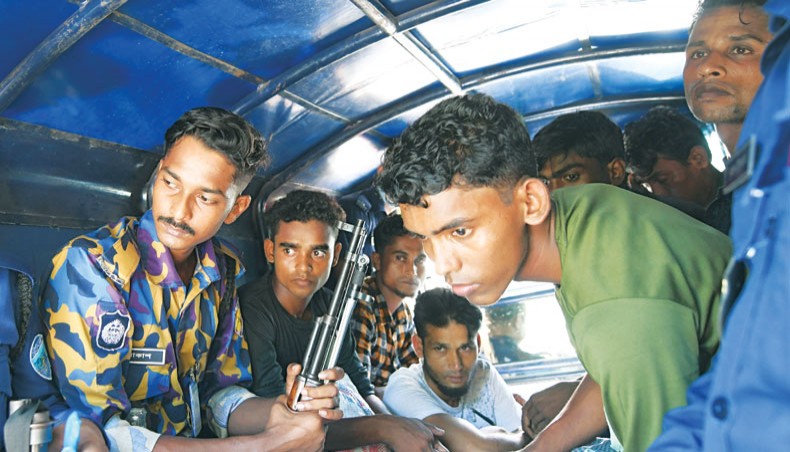 Bangladesh’s policemen detain Rohingya refugees after they tried to cross over a check post in Cox’s Bazar on Saturday. — AFP photo

The police along with other agencies concerned have launched a fresh crackdown inside the Rohingya camps in Cox’s Bazar following the killing of at least nine people in factional clashes in the first 10 days of the current month.

At least 30 Rohingya refugee troublemakers were arrested on various charges during a drive.

The officials said they were now compiling a list  to identify the troublemakers based on specific charges or their criminal activities since their arrival after August 2017.

‘We are compiling the list of the troublemakers so that no further untoward incidents can take place in the camps,’ Chattogram range police deputy inspector general Anwar Hussain told New Age.

Mohammad Hemayetul Islam, the commanding officer of the 16th Armed Police Battalion in Cox’s Bazar, said they have launched the fresh crackdown considering the safety and security of the refugee community.

He said that they look after the security of 13 camps and identified about 250 Rohingya troublemakers.

The APBN commander said they arrested at least 18 suspected Rohingya criminals following the recent shooting, killing and attacks, while another official said that they identified 250 others for their alleged engagement in criminal activities.

The Amnesty International on Friday called on the Bangladesh government to protect the Rohingyas following violent clashes between armed criminal gangs had led to the killings and injured hundred others in the camps in Cox’s Bazaar since October 4.

At least two thousand Rohingya people were forced to flee their shelters to other camps since violence broke out between two rival factions over the control of the illicit trade of contraband drugs inside the camps.

On October 7, around a dozen shelters in the Kutupalong camp were burned to the ground.

‘We have seen that many offenders were repeating their crimes and even got involved in torching the houses of their community people,’ said Chattogram DIG on Saturday.

Hafez Jalal Ahmed, a chairman of the camp’s Rohingya Community, claimed that Rohingya criminals abducted the boy on October 6 -- the day when sporadic clashes between two factions of Rohingyas killed four residents of the camp in Ukhiya.

After two days, the criminals left Ziabur under a local bridge in critical condition. He was shifted to the hospital where he died on Saturday early morning, Jalal Ahmed said.

The police had arrested 12 Rohingya miscreants in five murder cases in the last week.

At least four Rohingyas, including the second in command of Master Munna group, were killed in an intragroup clash in the Kutupalong camp on Tuesday night, according to officials.

Rapid Action Battalion officials said that Mahmudullah Gias Uddin, brother of Munna, was killed along with three others during the clash.

The Munna group leader Munna, known as Master Munna, went into hiding following the incident but only after sharing his audio message with his followers.

‘Right now we are uncertain of Munna’s whereabouts but a drive is on to locate him,’ said Anwar, the Chattogram range DIGS.