The royal road to results 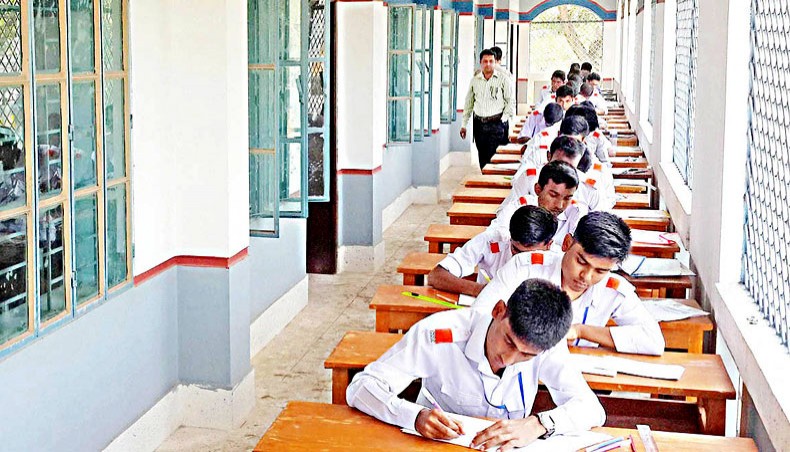 A file photo shows student taking the Higher Secondary Certificate Examinations in a centre in Bogura in 2019. — New Age/Focus Bangla

WHEN I was taking my bachelor’s examinations in the English literature in the University of Dhaka in July 1993, one day as I finished walking down the stairs from the examinations hall on the top floor of the Arts Building, I ran into a senior teacher of ours, who died a year ago. She was going to the department office from her room. After I had wished her a good afternoon, she stopped short and asked me how the day’s examination went. Before I could say anything, she said, ‘I don’t know why the university gives the exams. We have seen you attending classes and walking down the corridors for three years. That’s enough to make an assessment. They should hand you certificates without the exams.’

I recalled the incident not out of my endeavoured volition. It flashed in my mind as I watched the education minister, on television, on Wednesday saying that the government has decided not to conduct the Higher Secondary Certificate Examinations and its equivalents, which were meant to take place on April 1 but have been delayed by more than six months because of the COVID-19 outbreak. The first three cases of COVID-19 infection in Bangladesh were announced on March 8 and the first death from the disease was reported on March 18, which may have prompted the closure of all educational institutions, which has now been extended, in phases, until October 31.

There had been a whiff in the air until recently that the government could conduct the examinations, with proper adherence to COVID-19 safety guidelines, some time around the year-end. But the government has now decided to announce the results of the year’s higher secondary and equivalent examinations, the most important of all the four public examinations of primary completion, junior school certificate, secondary certificate and higher secondary certificate based on the results of the students of the Secondary School Certificate Examinations and Junior School Certificate Examinations and their equivalents in other streams such as madrassah and technical education.

A technical committee, to be composed of the chair of the Board of Intermediate and Secondary Education, Dhaka and representatives from the University of Dhaka, the Bangladesh University of Engineering and Technology, the health education wing of the health ministry, the Madrassah Education Board and Technical Education Board and to be headed by an additional education secretary, will work out the percentage of marks for the higher secondary based on the results of the secondary certificate and junior school certificate examinations. The committee will also decide issues in the cases where students have changed their group after the secondary examinations. The results are said to be out in December after the committee prepares the report by November.

What my teacher said in 1993 could be a plausible way as the teachers who had seen us for three years studying for a single degree knew us well and we had to take a series of tutorial examinations and they had the marks that we obtained. Results based on the marks of tutorial examinations and the assessment of class performance could have been possible if the university had wanted it to happen this way. But results based on junior school certificate and secondary school certificate examinations for about 1.36 million students — about a million regular students and about a quarter of a million students of the year before repeating the examinations or taking the examinations as private candidates — under 11 boards of education may well have the scope for discrimination against some and undue advantage for some others. And there could be some miscalculations that may aggrieve yet some other students and such grievances may last as long as they would try at any competitive public benchmark.

The government may have a point in deciding to base the higher secondary examination results on the results of the secondary school and junior school certificate examinations as a special case, occasioned by the prolonged outbreak of a disease, which requires social distancing and sanitising, in the least, as preventive measures. The conduction of the Higher Secondary Certificate Examinations involves a huge number of people — the examinees and their guardians moving to the examinations halls — there are usually about 2,500 centres across the country — and back home, the invigilators and other people involved in the business, who are said to be about 30,000. There are risks of COVID-19 infection every examination day. Besides, the evaluation and the publication of results could take at least three more months, which may not be desired when the conduction of the examinations has already been delayed by more than six months.

This is a big risk, indeed. And how far are we, the government and the examinees and their guardians, ready to take the risk? The general holiday that the government ordered beginning on March 26 had been in force until May 30. Almost everything started moving after May, with 1.4 million public servants routinely attending office and close to four million apparel workers regularly going to work. Public transports are running to their full passenger capacity. Almost all businesses have reopened. Why could the government not hold the examinations, strictly keeping to the health safety protocols?

The government could rather conduct the examinations with a tailored-down syllabus, the compulsory subjects, with integrated papers for Bangla and English, and one more subject specific to the groups, in double or even triple the number of examination centres, on spaced out dates, with proper and strict adherence to health safety protocols, giving the students a couple of months for making the preparations as they have been out of academic activities for a long time. The marks scored in the three papers could then be averaged for other subjects the students are not taking the examinations in. The best of the scores in the four or five subjects could also be given in subjects not being dealt with in the examinations. The government could also decide a single-day examination, say with 150 marks, with 50 each for Bangla, English and a subject specific to the group.

This may also inflict further injustice on many others. In the current education system that is result-centred, a space of six months is enough for most serious students to score good marks in public examinations even if they fail to make any mark in previous examinations, perhaps because of slackening or out of happenings ordained by the fate such as illness or accidents. There are many instances where the students who have failed in the half-year examinations or tests given to assess their competence for taking the final, public examinations but have somehow managed to pass through the hurdle have scored the best of the marks in the end. The way the government is trying to deal with the issues leaves no scope for the students who did poorly in their secondary and junior certificate examinations to score good marks in the higher secondary examinations even when they have made the best of preparations.

Many students change their groups after their secondary education, taking up humanities after having read science or moving to humanities after having read commerce. A student of commerce in higher secondary courses who have read science in secondary courses can be a pain in the neck for managers of national education in their efforts to decide marks for certain subjects. This could constitute further injustice for a significant number of students. Marks of the higher secondary examinations, in a higher percentage, and of the secondary certification examinations, in a lower percentage, come at play in admission to the universities. Marks of the higher secondary examinations computed on the basis of marks of the secondary and junior certificate examinations may stop many of the students from even taking university admission tests.

The batch of the current higher secondary examinees, on the publication of their results in December, could enter the institutions of higher education in about two months — in February or March. The next batch of higher secondary examinees, as yet meant to take the examinations in April 2021, could then enter the university or equivalent institutions in July or August. The institutions, most of them, have already been stuck with five batches of students. Are the universities or institutions offering higher education ready to handle seven, or even eight, batches of students for the next five to six years? With herd immunity still at a theoretical level and vaccines for COVID-19 trumpeted to be available by the year-end, the processing of higher secondary examinations of two batches, one with results in December computed on the basis of results of previous examinations and the other with the conduction of examinations in April, within a gap of four months may as yet sound plausible. What if the COVID-19 emergency is prolonged, with no vaccines coming to be available soon and with a probable second wave of the outbreak lashing at people, shutting the world for a second time?

The conduction of the examinations keeping to a tailored syllabus on spaced out dates with strict adherence to health safety protocols and the averaging of marks, or choosing the best of the marks, for all other subjects could yet be discriminatory against some of the students and afford injustice to some others, yet this would inflict less injustice on some and afford less advantages to some than it would do if the government publishes the higher secondary results computed on the basis of the results of the previous two public examinations.

Euclid, it is said, having opened a school of mathematics at Alexandria, was asked by King Ptolemy whether he could not explain his art to him in a more compendious manner. Euclid is said to have answered: ‘Sir, there is no royal road to learning.’ The phrase ‘royal road’ means ‘short cut.’ There is also, perhaps, no royal road to the evaluation of students. The shorter the road is, the more is the scope for injustice. The longer the road is, the less is the scope for injustice. The government appears to have chosen the royal road to results.