Provocation on the high seas 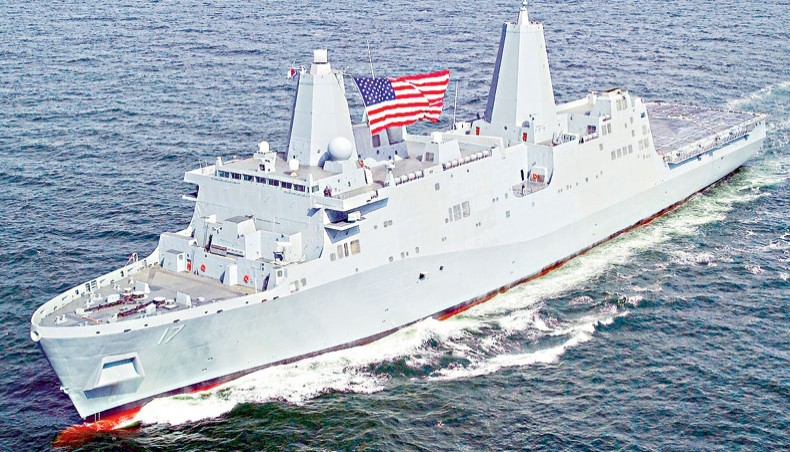 THE war on terror is slowly ending. The US military will try to keep bases in Iraq and Afghanistan, but with most troops gone in the next few years, the lives of the few who remain will be at constant risk. Pressure will mount to get those soldiers out. But Pentagon bureaucrats and brass are masters of institutional infighting, and, apparently, ignoring presidential orders they don’t like, so who knows how that will turn out? One thing is sure: the military’s focus has shifted, from the Middle East to Russia and China. That means US soldiers and materiel will continue to be in places they shouldn’t, in ever greater numbers, namely the Black Sea and the South China Sea.

Lest you fear that peace might break out in the Middle East, there’s always the possibility of a US assault on Iran. That chance greatly increased with the Trump regime’s monumental blunder of smashing the Iran nuclear treaty. Trump clearly thought his high-handed rejection would cow the Iranians. He was wrong. In an apparent rage, he ratcheted up sanctions, threats, insults and then — an assassination, the logical conclusion of which was war, had Trump not come to his senses. Since then things have cooled down a bit, though not enough to stop the Trump regime from interfering with Iran’s oil trade with Venezuela or from making preposterous accusations about Iranian plots against the US ambassador to South Africa, an official with no relation to Iran, known mostly for her business in expensive handbags and for donating to Trump.

What the idiotically bellicose US policy toward Iran — including the recent US push for more sanctions — has mainly achieved is a warm embrace between Iran and China. And that’s not a matter susceptible to piracy on the high seas — the preferred US approach to tankers taking Iranian fuel to Caracas. Nor will wild charges about planned assassinations of obscure, random US bureaucrats affect this relationship. The Trump regime has blustered, threatened, insulted and caused the great Iran-China friendship to sink deep roots and blossom. It probably would have anyway, but Trump surely deserves credit for nourishing it.

As Time reported on July 29, Iran is negotiating a 25-year deal with China, with ‘billions of dollars worth of Chinese investments in energy, transportation, banking and cybersecurity in Iran.’ There also could be ‘weapons development and intelligence sharing and joint military drills.’ In short, this $400 billion deal is huge and alarm bells are ringing frantically in Washington. They shouldn’t be. If the Trump regime had been paying attention, they would have seen this coming, because it’s the logical outcome of their absurd hostility to both countries.

But then, cultural illiteracy regarding Iran is a feature of Republican policy in the Middle East. After all, the Bush regime invaded, conquered and destroyed Iraq — war crimes whose main beneficiary was Iran, which had no love, to say the least, for Saddam Hussein and was more than happy to cement its brotherhood with newly ascendant Iraqi Shia. This is the sort of stuff any high schooler could have alerted the Bush regime to in advance. But alas, the Grand Old Party’s geopolitical geniuses had no use for even high school wisdom. To ensure we all got that point, the Trump regime quickly pounced on one of Obama’s few decent and intelligent moves in the Middle East — the Iran nuclear treaty — and shredded it.

Still, the US military’s focus has shifted. That shift started with Obama’s odious ‘pivot to China.’ According to Chinese state councilor Wang Yi, quoted by Russia Today, US intervention in the South China Sea is ‘the main driver of militarisation there.’ Currently, several countries in the region claim territory in the South China Sea — China, Vietnam, Malaysia, the Philippines, Indonesia and Brunei. Some of these claims overlap, thus causing disputes, Russia Today reports. The US stirs the pot with its ‘freedom of navigation’ military patrols. Naturally this intervention has led to incidents between the Chinese and US militaries. And worse could happen any time. China regards the South China Sea as its backyard and the US presence there as a provocation. After all, how would Washington react to Chinese military patrols in the Gulf of Mexico? That is the territorial equivalent of what the US does to China, though Washington refuses to recognise this in its quest for global dominance.

It’s the same with US aggression in the Black Sea, where the target is Russia. In August, the US held military drills in the Black Sea, known, in the not too distant past, as the shores of Russia. Earlier, Andrei Krasov of the State Duma Defence Committee told the Interfax agency: ‘The actions of American reconnaissance aircraft will not remain without reaction.’ Indeed, in late July, Russia reported intercepting an American reconnaissance flight over the Black Sea. Too much of this sort of stuff could lead to war.

So what we have here is the US fishing in troubled waters. The North Atlantic Treaty Organisation has already nearly surrounded Russia, which now boasts supersonic nuclear weapons. In response, Trump recently revealed that the US has some sort of secret ‘super’ weapon. Which only makes the Black Sea brinksmanship more dangerous. Both adversaries are armed to the teeth. To make matters worse, Trump has ripped up all nuclear treaties with Russia except START — and that is at death’s door.

A war with either Russia, China or Iran would be catastrophic, as anyone with a brain knows. Nor would it solve any of the myriad disasters currently besetting the US: an out-of-control pandemic, with more fatalities than any other country in the world and no end in sight; economic collapse, with tens of millions jobless and millions facing eviction and homelessness in a few months; a climate taking revenge on fossil fuel capitalism by burning up large swaths of the globe, including the American West Coast; other human-induced extreme weather events elsewhere in the US, like the currently soggy Gulf Coast; the rise of violent, over-armed, know-nothing, radical right-wing vigilantes; racial unrest. And those are just the big, obvious monster weeds in the American front yard. Washington should take a page from Voltaire and tend its own garden. Forget about the Black Sea, the South China Sea and the Gulf of Oman. Now is not the time for new conflict. Because as every school child knows, never is the only time for nuclear war.

CounterPunch.org, September 25. Eve Ottenberg is a novelist and journalist.