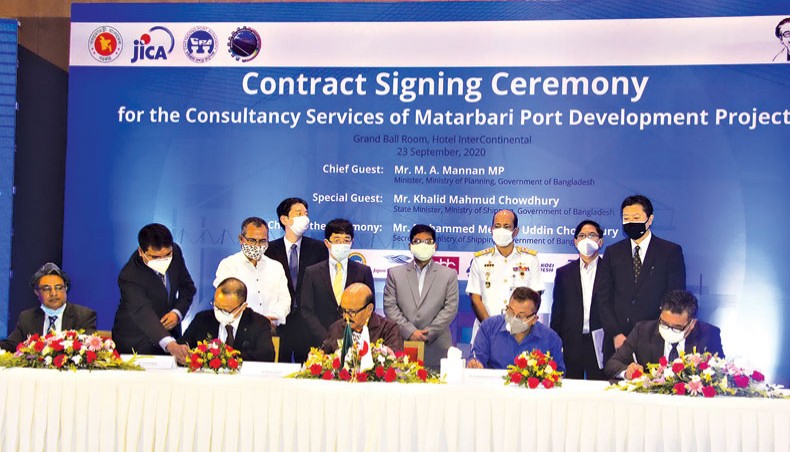 Two contracts were signed on Wednesday between Chittagong Port Authority and Nippon Koei, JV and between Roads and Highways Department and Oriental Consultants Global Company Limited JV for the consultancy services of Matarbari Port Development Project at Hotel Intercontinental in the capital.

Matarbari Port Development Project’ is an important ‘Fast Track Project’ of the government. This project is an outcome of the concept of ‘BIG-B’ (The Bay of Bengal Industrial Growth Belt) jointly announced by prime ministers of Bangladesh and Japan in September 2014.

The objective of the project is to develop a reliable and low-cost logistic network for seaborne cargo or freight handling and transporting facilities to maintain competitiveness of Bangladesh products in the global market.

In order to achieve these objectives, a new commercial port and a port connecting road with national highway at Matarbari, Moheshkhali and Chakoria area in Chittagong division will be constructed, thereby contributing to create facilities with neighboring countries.

This loan will be utilised for the consultancy services for detailed design, tender assistance, construction supervision and one-year warranty for Matarbari Port Development Project.

The Nippon Koei JV, Japan has been selected as top ranked consulting firm to render engineering related services with a negotiated contract price of Taka 2,340,306,614.20 including tax and VAT.

Shipping secretary Mohammed Mezbah Uddin Chowdhury chaired the programme while senior officials from the government, JICA, embassy of Japan were present on the occasion.

Mannan said the long and trusted relationship between Japan and Bangladesh has gain momentum during the period of this government led by prime minister Sheikh Hasina and prime minister of Japan Shinzo Abe.

During this period, Bangladesh has focused on qualitative infrastructure with the Japanese technical and financial corporation, he added.

He said these infrastructures will lead Bangladesh to the middle-income country and in 2041 a developed country.

Khalid Mahmud Chowdhury appreciated the findings of the study that placed the Matarbari deep sea port on the same channel developed by the ultra supercritical coal based power plant project with a little modification.

He mentioned this could be a lesson how to maximise the benefit of investment and value for money strategy.