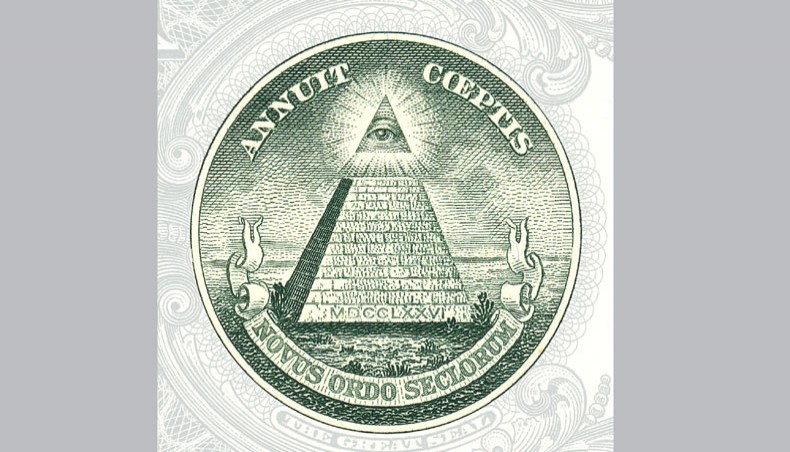 The Eye of Providence, or the all-seeing eye of God, seen here on the US$1 bill, has been taken by some to be evidence of a conspiracy involving the founders of the United States and the Illuminati. — Public Domain

THE most consequential false conspiracy theory of the last twenty years in the United States cantered on fabricated accusations raised against the Iraqi state in 2002–03. These claimed that Iraq maintained secret stores of ‘weapons of mass destruction’ and intended to use them against the west, perhaps imminently. Most versions also insinuated the Saddam regime was involved in some vague manner in perpetrating the 9/11 attacks together with its sworn enemies, the jihadi movements then doing business as al-Qaeda. That is what the vice-president running the regime, Cheney, repeatedly said. His president, Bush, just repeated the magic words 9/11-Saddam-9/11-Saddam-9/11 for months, until it was taken to be true by enough people to allow a smooth start to the carnage. The claims were actively fabricated by officials and agents at several agencies of the US, UK and other national security states, by various client groups and allied journalists, and by freelance assholes looking to get a piece of the action. The fabricators knew they were lying, and they knew that they lied so as to sell a planned, unprovoked war of aggression to the American, UK, and other western publics. The resulting war destroyed a nation, led to more than a million deaths, and accelerated the establishment of an archipelago of torture centres under US control.

In short, the ‘Saddam-WMD-9/11’ conspiracy theory was a top-down psychological operation conducted by state-based agents against the public, and was freely trumpeted by nearly all organs of the US corporate media. It has been completely discredited, but rarely will you here it called a conspiracy theory. None of the perpetrators of the campaign have been prosecuted, and most have continued their career trajectories unhindered by their participation in this well-known crime. Today many of them have been embraced by the Democratic establishment as heroic fighters against Trump — the same Democratic establishment that always seeks distance from actual fighters against Trump.

The most consequential American conspiracy theories ever were the Red Scares of 1919–21 and the late 1940s and early 1950s. Both met with a degree of popular enthusiasm and broad fear-based assent, but both were initiated and run by state and corporate-based elements as top-down psychological operations against the public, specifically targeting the left, labour organisers, and journalists, celebrities or teachers who showed insufficient anti-communist fervour. Both campaigns succeeded in transforming American society and politics in a right-wing direction, and helped in partly dismantling the progressive, leftist and honestly liberal movements of their times.

A recent conspiracy panic campaign, #Russiagate, presented a mythic (and facially laughable) explanation for how the Democrats managed to lose the unloseable 2016 election. It appears to have been intended to weaken or to knock Trump out of office. If so, it backfired completely, presenting a fictional distraction from the far-worse realities of the regime’s violent policies and incipient fascism. Every time that the ludicrous and byzantine accusations fell apart (predictably, in every case), Trump’s position was strengthened, and that of real opposition to Trump’s barbarities was weakened.

Given their failure to actually fight Trump on policy, and given the Democrats’ embrace of Bushian politics and Bush-era war criminals, austerity, and imperialism, and given their propping-up of a right-wing candidate who has his own degree of involvement in Trump-style nepotism and is visibly suffering from cognitive impairment, Trump would be cruising to re-election. Cruising, that is, except for the unpredictable factors of Covid-19, the Depression, and the open outbreaks of organised fascist street violence that he praises. And because a real opposition to this regime’s particular horrors exists, and has not surrendered. (If they lose, the Democrats will blame the real opposition, and are already doing so pre-emptively.) Thus, for the moment, Trump is well behind in the polls, despite the four-year favour to him delivered by the #Russiagate operation with its demand for 24/7 coverage and predictable serial failures.

However, the #Russiagate conspiracy panic operation also succeeded, insofar as it has functioned to condition most Democratic-type liberals (and some of the left) to uncritically accept a xenophobic explanation for the rise of an all-American fascism, and insofar as it has gained much support among them for a bellicose, new-Cold War stance and widespread favour for censorship measures (run by private mega-corporations) to combat ‘propaganda’ and ‘conspiracy theory.’

It cannot be known at this time, but the ‘QAnon’ narrative appears likely to have also originated with the action of a Trump-friendly outfit, with the design of casting noise over a story that sounds just like it, but is actually true. Trump, Bill Clinton and various celebrities and intellectual hooligans were all tied to the long-time human trafficking and rape-ring run by likely intelligence asset and ‘billionaire’ Jeffrey Epstein. He was convicted, and his co-conspirator Ghislaine Maxwell stands accused. The operation’s apparent purpose was to gain material for political blackmail. Trump’s former labour secretary, Acosta, was formerly the Florida prosecutor who made a deal to allow the convicted Epstein to walk free in 2008, and to seal the records of his clients. It’s fine to condemn QAnon, but when you spend your hours talking about how ridiculous and hateful and wrong the story is, you are not talking about Epstein and Trump and Clinton (and the various other Epstein ‘friends’). You are not talking about or acting on a million other things that matter. From the perspective of the QAnon propagators, you are helping to promote and reinforce the ruse.

America, like many places, is home to fantastically, facially false grand conspiracy narratives positing that the political economy (so evidently managed by a ruling class of owners and corporations and policy-makers reigning over large institutions, who act mostly in the open) is secretly run by a single, smaller, invisible cabal of satanically-inclined mystery men who just want to do evil because they hate America, or maybe because they want to destroy Trump’s beautiful white race. There are many varieties of grand-global conspiracy theories, but they often pander to odious, hateful, and exterminationist politics. The latter are often modelled on the old European anti-Semitic blood libel, or, in fact, repeat the old European anti-Semitic blood libel.

Grand-global conspiracy narratives can appeal to a common socio-psychological make-up that hankers for denial and magic and simplicity, for stories that attribute social ills and human troubles to a corruption that can be theoretically excised, restoring a normality that never really existed as it is now imagined. In this they are akin to other quick-fix narratives, many of them based in religious dogmas (eg bad things happen because people reject Jesus and commit acts the Bible supposedly prohibits; or, to take a now-abandoned version, alcohol consumption is the true primary cause of social ills and prohibition can fix it). For most, the reality that their society is systematically rotten to the core, burning the planet, and heading for a predictable fall, and that any change to this reality must be revolutionary or will be nothing, is much harder to process, above all emotionally. It also subjects one to the accusation of radicalism, extremism, or ‘conspiracy theory.’

I dispute that very many people change their politics or prejudices or world-view as a result of exposure to one of the global-type conspiracy theories. On the contrary, these are devised to aggrandise and manipulate already-existing political tendencies. People tend to believe what they were long-ago conditioned to believe, and they tend to see what they believe. And remember, the most effective and consequential conspiracy theories in the modern milieu are rarely products of autopoeitic convergences of mass psychology. They almost always have original authors who know that they are inventing this shit, like QAnon. They are the products of modern public relations and popular mood management.

Granting that grand-global conspiracy narratives exist, the use of the phrase ‘conspiracy theory’ in American discourse has always been rotten as fuck. Whether true or not, whether or not believable or grounded in evidence, any claims that attribute malfeasance to the American ruling class and policy-making power elite, or to the actual owners and runners of a system in which high-level crime was long ago legalised, is derided as ‘conspiracy theory’ by the very same ruling class, power elite, corporate media, punditry, and liberal-authoritarian establishment. However, claims that mirror the same narratives, but allege them against an officially designated enemy, are never called conspiracy theory. In fact, once the latter tales are circulated within the corporate news media, to question them comes itself to be classified as conspiracy theory. You are a conspiracy theorist if you reject the outlandish #Russiagate conspiracy theories. And, once called a conspiracy theorist, you are supposed to be automatically and forever discredited from participating in public discourse. Increasingly, you are seen as the bearer of a dangerous and contagious disease, associated loosely with all other persons categorised as ‘conspiracy theorists,’ and treated as fair game for censorship.

Conspiracy panic is a propaganda weapon that props up an overall portrayal of the mass of the people (and especially critics of the ideological hegemony, of whatever stripe, good or bad) as ipso-facto stupid, pre-emptively discredited, crazy, unworthy of participation in discourse, and dangerous. Conspiracy panic nowadays is a go-to for liberals to deny and distract and divert to incremental bullshit, and not have to think about systemic irrationality, falsehood, evils and failures, and how most of the unfolding disasters — including Trump himself — are not aberrations or surprises but predictable and systemic. It’s easier and more comforting to affect being appalled at the stupidity of QAnon (or the supposed millions who were moved to vote for Trump only because they saw a ‘Russian’ post online), and to virtue-signal that you are different from the dumb right-wing patsies who eat that shit up, than to spend too much time being aware that the billionaire and corporate and ensconced policy-making ruling class as a whole — their names are known and plastered in the headlines — is by definition a predator class, professionally incapable of mercy, with overwhelming power over the rest of us, acting in ways that guarantee capitalism and its ‘ways of life’ will continue burning the planet, literally, until the ecosystem’s capacity to sustain the present human civilisation and population collapses. Which, speaking in historical lengths, is imminent, and possibly no longer reversible. Fight this anyway.