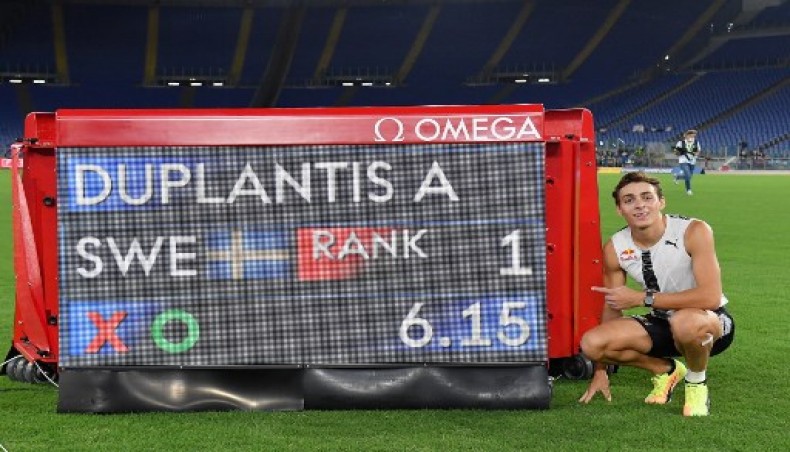 Sweden Armand Duplantis poses after set the highest ever outdoor mark of the men's Pole Vault during the IAAF Diamond League competition on September 17, 2020 at the Olympic stadium in Rome.- AFP photo

Duplantis, who already holds the world indoor record of 6.18m, bettered the mark of 6.14m achieved by Bubka in July 1994 in Italy.

The 20-year-old succeeded on his second attempt in a competition he dominated in perfect warm and windless conditions, but without spectators to celebrate in an empty Stadio Olimpico.

‘I think I'm still up in the clouds right now,’ said the US-born athlete.

‘It's a surreal, super crazy feeling.’

Duplantis set the world record indoors in February, and had made the outdoor mark his goal with the Olympic Games and European championships postponed because of the coronavirus pandemic.

‘It was something I really wanted to do, there was a lot of confusion between the indoor and outdoor,’ said Duplantis.

‘I thought 'why not just do it?' be the best outdoor, to clear up the confusion.’

Duplantis had cleared an earlier attempt but hit the bar on the way down.

‘It was a kind of mental thing.

‘After that first attempt I knew what I had to do it so just went out and did it,’ said Duplantis, who heads to the final Diamond League meet in Doha next week.
But Norwegian Karsten Warholm missed out on the 400m hurdles world record, despite winning in a blistering 47.07 seconds.

Two-time world champion Warholm, the second fastest 400m hurdler in history, had been hoping to topple Kevin Young's long-standing mark of 46.78sec which the American set at the 1992 Barcelona Olympics.

The 24-year-old outdistanced his rivals but had to settle for a meet record.

‘Of course I'm satisfied, this is my third best time ever,’ said Warholm, who left France's Ludvy Vaillant a distant second at 48.69sec.

‘This year I am getting a lot of MRs, my average time is getting really good. I am really satisfied at being at that level. It shows I am close to the world record.’

Warholm holds the second fastest time in history with the European record of 46.87 clocked in Stockholm last August, coming within 0.09 of Young's 28-year mark.

Warholm bettered his 47.08 from Berlin last week in the Italian capital.

In the women's 100m, the 2016 double Olympic champion Elaine Thompson made a winning comeback in Europe.

The Jamaican sprinter, who had not crossed the Atlantic since the outbreak of the pandemic, won in 10.85sec, best time of 2020.

‘I leave here with a world leading time. I'm super excited this tells me where I am at the end of the season and how I can prepare for next year.

‘This year required more adjusting. My goal was to push back and motivate myself. I am a double Olympic champion so I want to be at my top for next season.’

Lieke Klaver of the Netherlands won the women's 400m in a time of 50.98sec with countrywoman Femke Bol taking the 400m hurdles event in 53.90.