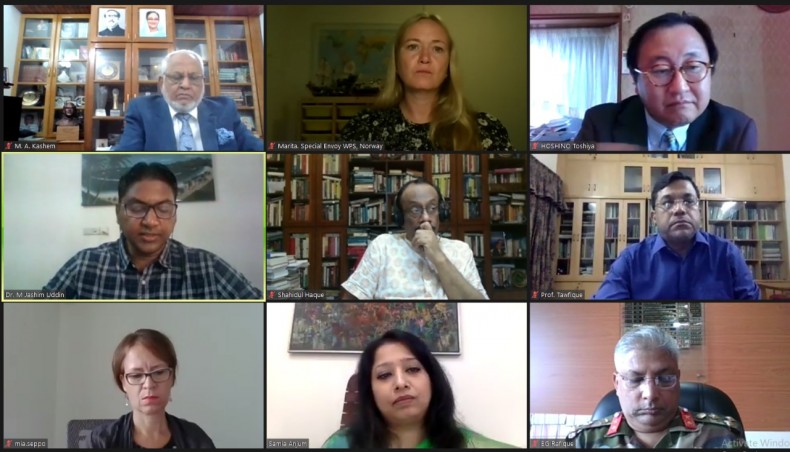 Under-secretary-general and special adviser to the UNSG for the Commemoration of the United Nations’ 75th anniversary Fabrizio Hochschild, and chair of Board of Trustees of NSU MA Kashem, among others, attend the inaugural session of a two-day long international webinar titled ‘The UN in Times of People’s Needs: Rethinking Multilateralism’ on Wednesday. — Press release

The United Nations has betrayed common people by failing to uphold their rights while overemphasising a notion of sovereignty of the member states, experts said at an international seminar on Wednesday.

Voicing the need for making COVID-19 vaccine available through UN mechanism by getting rid of ‘vaccine politics’ created out of business interests of a few countries, they said questions of enforcement of international covenants enacted by the global body always remained out of focus to serve the interest of the elite member states.

With limiting its focus in only civil and political rights, he said, UN has been ignoring for the last 75 years the social, economic and cultural rights of the people in the member states.

UN has failed to maintain a balance between supra-nationalism and state sovereignty, he alleged.

Relaying on too much a notion of sovereignty of the member states has made the UN a failed organisation, Professor Mizan said, adding that it could not even threaten a member state for use of force, let along actually use force to intervene in state affairs to uphold human rights.

UN has become a ‘club of elite states’ ignoring the majority of the states, especially the least developed ones, he said.

On a question of differences of upholding civil, social, economic and cultural rights between democratic and undemocratic countries, he replied that ‘democracy itself is an integral ingredient of human right.’

Participating in the discussion from UN headquarters in New York, UN under-secretary-general Fabrizio Hochschild emphasised the need for reform in the UN mechanisms as well as rejuvenating inclusive multilateralism to resolve global challenges on attaining social equalities.

She suggested that the UN should make the organisation inclusive, remaining above patriarchy by ensuring accountability and shared responsibility at all levels.

Senior Bangladesh diplomat Nahid Sobhan’s emphasis was on rights of the migrant people in the host countries.

Migrants are nowhere to be found on the map of COVID-19 pandemic, they have become like orphans, Nahida, Bangladesh ambassador to Jordan said.

She said that the UN should become neutral, transparent and representational by focusing more on the developing societies.