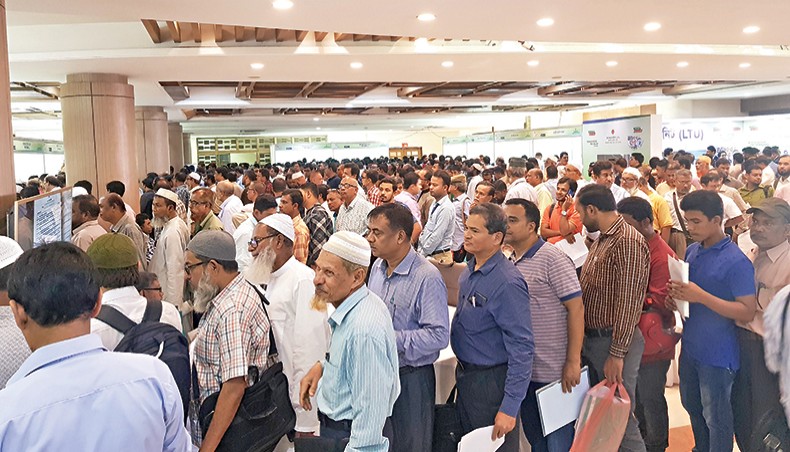 A file photo shows a large number of people waiting in queues to file tax returns on the opening day of the Income Tax Fair 2019 at Officers’ Club Dhaka. The National Board of Revenue has taken a move to finalise the draft of the new Income Tax Act-2020 by this month to expedite introduction of the new law following pressure from government high-ups, officials said. — New Age photo

The National Board of Revenue has taken a move to finalise the draft of the new Income Tax Act-2020 by this month to expedite introduction of the new law following pressure from government high-ups, officials said.

They said that the revenue board was under pressure to place the draft before the cabinet for approval as it had failed to do so in the last 10 years.

In the budget speech for the fiscal year 2010-2011, the then finance minister AMA Muhith first made the announcement to formulate a new income tax law.

In the budget for FY2011-2012, he said that the Bengali version of the law would be placed before the parliament by December 2011.

Since then almost every year, the country’s finance minister has expressed the hoped to place the new law before the parliament as a bill next year but this has yet to happen due to delay in procedures and the ‘go-slow policy’ of the NBR.

The current finance minister, AHM Mustafa Kamal, in his budget speech for the current FY21 said that work was underway to modernise and update the Income Tax Ordinance-1984 by introducing the new income tax law.

He had, however, in his budget speech for the previous FY2019-2020 expressed the hope that the law would be placed before the parliament next year.

Even the NBR in the last few years had made several schedules to finalise the draft and place it before the parliament but later adopted a go-slow policy prioritising implementation of the new VAT law first and in light of other administrative and political issues.

Officials said that the cabinet in August 2017 asked the NBR to place the draft of the new law before it as soon as possible incorporating the international best practices and upgrading other relevant issues.

The cabinet gave the instruction in response to the draft Income Tax Act-2017 which the NBR prepared by transforming the existing Income Tax Ordinance-1984 into a law keeping the same provisions in line with a verdict given by the Supreme Court nullifying the ordinance along with 166 other laws framed during military regimes, they said.

The law should be drafted in Bengali along with an official English version, the cabinet said.

The officials said that the NBR had already prepared the English draft of the new law and also received the Bengali version of the draft from its consultant.

The NBR on August 10 formed a six-member committee headed by its member (tax survey and inspection) Ranjan Kumar Bhowmik to review the draft and prepare recommendations, mainly for the Bengali version.

The committee was asked to place its recommendations by September 13, a committee member told New Age.

The committee has so far held six meetings and is now working to place its recommendations as soon as possible, he said.

The NBR may unveil the draft law for public opinion on its web site before moving forward for vetting and getting the cabinet’s approval.

Officials said that the major objectives of the new law were to incorporate the international best practices, make the law understandable to taxpayers, simplify the procedures and narrow the scope of tax evasion and avoidance using loopholes in the law.

The basic structure of the existing provisions of the ordinance will not be changed, they said.

They said that emerging business dimensions and international taxation issues such as general anti‑avoidance rules, special anti-avoidance rules and thin capitalisation, transfer pricing, digitisation of tax system, minimising the scope of tax exemption and narrowing existing mismatches in the rules and regulations would be given priority in the new law.

Earlier in 2013, the International Finance Corporation prepared a draft Income Tax Code incorporating the income tax law, gift tax law and wealth tax law for Bangladesh but the NBR scrapped the code on finding it too complex in the context of the country.