US protesters rally against mandatory flu shots for students 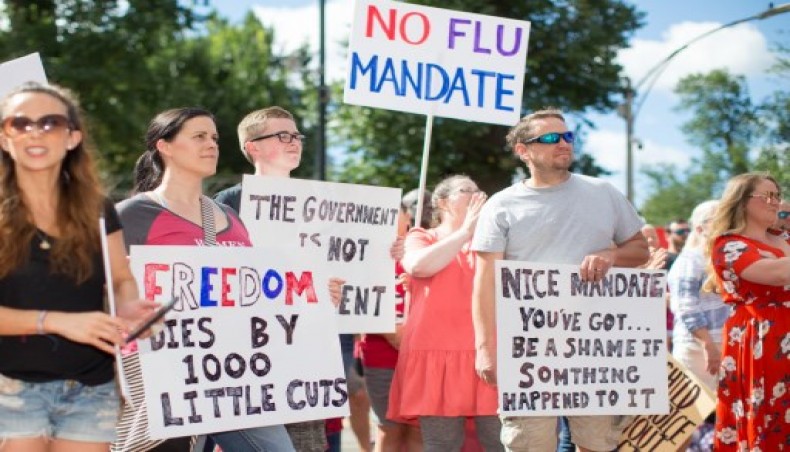 Anti-vaccine activists hold signs in front of the Massachusetts State House during a protest against Governor Charlie Baker's mandate that all Massachusetts school students enrolled in child care, pre-school, K-12, and post-secondary institutions must receive the flu vaccine this year on August 30, 2020 in Boston,- AFP photo

Hundreds of people demonstrated Sunday in the US city of Boston against a new state rule mandating flu shots for students, a measure intended to ease the impact of the coronavirus pandemic.

The northeastern state of Massachusetts became on August 19 the first in the United States to add seasonal flu shots to a list of mandatory vaccines for students, though exemptions are granted for religious or health reasons.

Around 70 percent of the state's school districts plan to bring students back at least partially in the fall, months after classrooms were shuttered due to the pandemic.

Demonstrators opposed to the new rule, who gathered peacefully Sunday outside the State House, denounced what they called an assault on their individual rights.

The protesters included many parents with their children, and representatives of paramedical professions such as Carla Leclerc, a chiropractor.

‘I'm strongly against the proposed vaccination and mandated anything. It should be a parent's choice whether to vaccinate their kids, especially for the flu shot, which is not even safe, necessary or effective,’ she told AFP.

Some protesters waved banners calling for the re-election of US President Trump or T-shirts with the letter Q symbolizing the right-wing conspiracy theory called QAnon.

Several senior US government health officials including Robert Redfield, the head of the Centers for Disease Control and Prevention, have urged Americans to get seasonal flu shots this year.

Officials have said the vaccinations could avoid worsening the health crisis triggered by the pandemic, but they have stopped short of saying such shots should be mandatory.

Massachusetts, led by Republican governor Charlie Baker, who has been sharply criticized by Trump, was among northeastern US states that were hard hit in the early months of the disease but is now among those who have brought it under control.