Stop Genocide: a demand to stop brutality and injustice 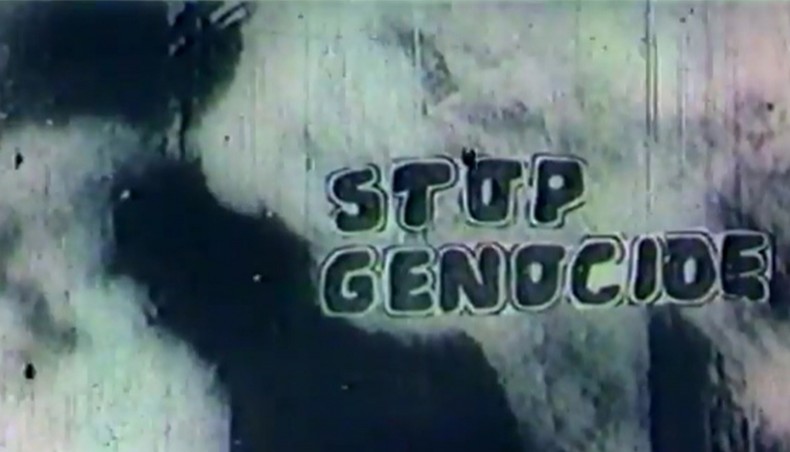 Stop Genocide is one of the best creations of prominent Bangladeshi filmmaker Zahir Raihan. While reviewing the 20-minute-long documentary film, Sohul Ahmed writes that Zahir Raihan did not just want a stop the genocide, brutality, injustice and oppression, he also wanted to shed light on the issues to raise public consciousness

ZAHIR Raihan, one of the most leading filmmakers of Bangladesh, has actively participated in almost all the movements during the Pakistan period. From the Language Movement to the Liberation War, his involvement was multidimensional. His involvement with all those movements played a vital role in the characterisation of his works and had helped in portraying the mass awakening of his time in all his films, stories, and novels.

As Alamgir Kabir, another famous filmmaker of Bangladesh and a colleague of Zahir, noted that generally revolutionary films have been made after the revolution, but Jibon Thekey Neya (1970) might be the only film which depicted revolution during a revolutionary situation despite being surrounded by enemies.

Although Jibon Thekey Neya was released before 1971, his most influential piece, Stop Genocide was created and released during Liberation War of 1971. Stop Genocide is a 20-minute film that documents the genocidal acts carried out by the Pakistan Army on the people of Bangladesh. As MA Khayer, who was the in-charge of the Film Division of the Mujibnagar Government’s Information Ministry in 1971, remarked that, the film was the perfect depiction of that time.

The film helped extensively to expose the genocide perpetrated by the Pakistani military force. Zahir took up the plan to direct Stop Genocide at the end of May 1971. At that time a decision was made on making short-length documentaries on various aspects of the Liberation War of Bangladesh. Stop Genocide was the first episode of the series. Alamgir Kabir was deeply associated with the film. He has written a lot about this in his memoirs.

It is to be noted that, genocide, as the most horrific political term of the last century, was one of the important elements found in Zahir’s creations. He was politically aware of the brutality of colonialism and imperialism and was vocal about the people who suffered from such brutalities. Even this awareness could be found in a poem named ‘Oder Zaniye Dao’, written at the time of his school days. So, it was not accidental that he made a film on genocide.

Stop Genocide is a significant film, not just as a historical document of 1971, but also as one of the finest pieces on genocide. The film was made in the context of Bangladesh and 1971, but it crossed the national boundary. It was made centring on the genocide committed by the Pakistani Army in 1971, but it was not limited to Bangladesh and Pakistan only.

The film begins with a look at the imperialist policy of portraying the liberation struggle and the right to self-determination as a separatist movement. Even in the case of Bangladesh, the nature of the struggle was widely discussed. Does the struggle of Bangladeshis is a freedom movement or a separatist movement? Zahir made his position clear at the outset by quoting Lenin, ‘To accuse those who support freedom of self-determination, ie, freedom to secede, of encouraging separatism, is as foolish and hypocritical as accusing those who advocate freedom of divorce of encouraging the destruction of family ties.’

He has depicted the most horrible thing of the world with only three scenes. At the first scene, the United Nations is talking about human rights in New York, USA. The next scene is about the same day, but at a different location. This time it is Saigon, a city in Vietnam, where the US air force continues to bomb, regardless of all the human rights discussions. The next scene is again on the same date, but again the place is different. This time the place is a road to Bongaon, a village close to Indian border, where an endless procession of refugees has appeared. Where were they coming from, and why? Because a brutal genocide was going on inside Bangladesh, and they were trying to escape and survive.

Three scenes of three different places, but on the same date, basically depicts the ugly ‘truth’ about the imperialist powers. Imperialist powers are continuously giving lectures on ‘human rights’ and violating their own definition at the same time. On the one hand, they have set up organisations like the UN to define and promote human rights, and on the other hand, the strikers of these organisations are violating those ‘defined’ rights. It happened in the last century, and it is happening in the twenty-first century also.

The UN was not able to intervene in the Rwanda Genocide in 1994, and the failure is again exposed during Rohingya Genocide. Moving back to the film, shortly afterwards, human rights were again discussed, with shots and bombs being heard in the very next scene, and a baby boy is seen urinating on a railway line. The sign was very clear. Zahir highlights the contradictory position between words and acts of the imperialist powers and negates the politics of imperialist powers.

We know that the context of Stop Genocide was Bangladesh, the genocide perpetrated by Pakistani Army, and the refugee camps. However, it is easily noticeable that Zahir Raihan was repeatedly considering his position in the international context. While he was narrating the genocide of Bangladesh, he was comparing Yahya Khan with Genghis Khan, Hitler, and William Calley.

All of them were notorious genocide committers from different periods. He was comparing Bangladesh with the Nazi concentration camps. A teenager was shown on the screen. No doubt that she was a Bangladeshi and she was living in an Indian refugee camp. But when it was narrated in the film that she does not know her name, she does not know where she came from, she does not know her past — then this teenager goes beyond any specific time and space. She became a portrait of oppressed people of all times and places. She could be from Bangladesh, could be from Vietnam or could be from Nazi camps. Her pale face became the face of all oppressed people around the world.

Zahir Raihan did not only portray the genocide, but also brought up the resistance of the oppressed. There were several scenes from the training camps of the freedom fighters of Bangladesh. It could easily be said that Stop Genocide is one of the strongest, artistic and historic documents of anti-genocide and human rights.

But the release of Stop Genocide was not an easy path. The film faced a lot of obstacles as it unmasked American imperialism and many in the then Bangladeshi government who were supporters of imperialism. Because of using a quotation from Lenin, and not mentioning Sheikh Mujibur Rahman and six-point demand of Awami League in the film, a film director wrote a letter to the then acting president Syed Nazrul Islam demanding a ban on the film. The sender of the letter also mentioned, ‘If it is not done, I alone, am ready to start a movement’. But, after watching the film, the cabinet of Mujibnagar Government became very emotional, and the prime minister Tajuddin Ahmad appreciated the documentary. Later Indian prime minister Indira Gandhi directed her film division to buy the film and distribute it internationally.

The film ends with a demand from the narrator — Stop Genocide. It was not just a demand of the director, or an artist, rather it became a demand of the oppressed. Zahir Raihan did not just want a stop to the genocide, brutality, injustice and oppression, he also wanted to shed light on the issues.

Let us remember his unfinished work, ‘Let There Be Light’. He wanted to raise consciousness through his works. But, is his intention or his demand still relevant in the contemporary world? Undoubtedly, present national and international situation is proving it.

Sohul Ahmed a writer and activist.