Seas of the Indo-Pacific in turmoil 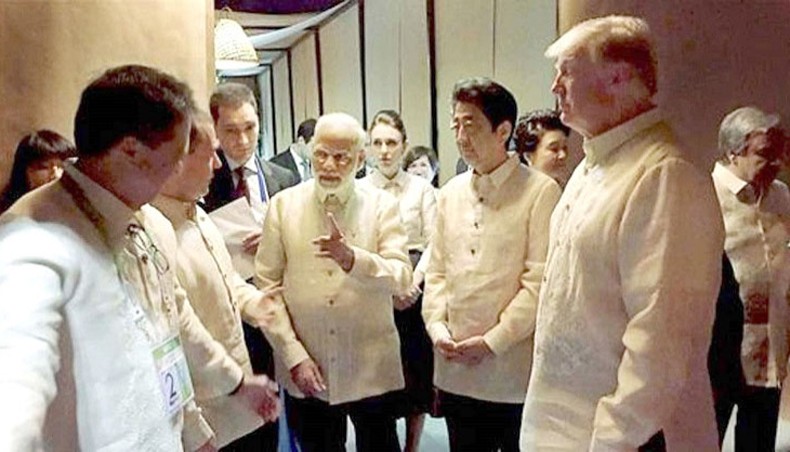 IN THE chronicle of how the situation is developing in the region covered by the Indian and Pacific oceans, alas, there are no positive trends that will please readers. To exacerbate the confrontation here between the two leading world powers, the United States and China, recently more problems have been pressing down on the latter’s relations with major regional players, such as Japan and India.

It is fairly certain that over the (not very distant) political horizon, the contours of an anti-Chinese military and political bloc are beginning to take shape, with Washington starting to talk about the need to form this back in early 2000s. Even back then, those three countries named above were pointed to as its key participants, with Australia added on by 2007.

Starting around the beginning of Barack Obama’s second presidential term, and then for about ten years, the idea of creating a ‘Quartet’ seemed to have disappeared. For a short time (no more than a year) that was replaced by the concept of a ‘G2 model’ with the United States and China, which was put forth by Zbigniew Brzezinski and Henry Kissinger; this was supposed to become a problem-free ‘two-umvirate’ that would rule the world.

However, the results of a visit by the US president to Beijing at the end of 2009 showed just how illusory the prospects were for any problem-free relations with this new world giant. Just one year afterwards, during a meeting with then-president of the People’s Republic of China Hu Jintao, who had arrived in the United States, Barack Obama raised the issue of ‘manipulating the yuan exchange rate’ as one of the main reasons for China’s overall economic success and, in particular, for the US goods trade deficit, which has in recent times shot past a whopping 400 billion USD per year.

Since the beginning of 2011 and then for almost ten years, trade and economic issues have been the central focus of bilateral relations, which eventually resulted in a ‘trade war’ that inevitably spread to almost all other aspects of the relations between these two leading world powers.

As far as the negative trends in China’s relations with Japan and India are concerned, the fundamental reason for this, apparently, stems from the fears held by the latter two of the former becoming a global power. And this despite the fact that Japan and India themselves are definitely laying greater claims to be included in the ‘pool’ of leading regional players.

Previously, it was reported that Japan has, to a certain degree, revived its foreign policy course ‘towards the southwest’, which was laid out back at the turn of the 19th-20th centuries, as the feudal country transformed into a modern power.

It should be emphasised once again that nowadays the main tool used by the Japanese leadership to take this course of ‘movement’ is its financial and economic power, which is both qualitatively advanced and the third in the world in quantitative terms. This is exactly why Japan is a preferred economic partner in the eyes of Asian (and not only Asian) countries, including in those of its political opponent, China.

Naturally, this process of ‘normalisation’ entails a certain upswing in the significance and military instruments used in Japan’s foreign policy. But the frequent horror stories about ‘the revival of Japanese militarism, which is accompanied by an increase in military activity in the Indo-Pacific,’ have almost nothing to do with reality (both for now and in general).

The primary obstacle to this remains both the continuing constitutional restrictions in place and the fact that it has the lowest (among the world’s leading powers) defence budget of only 1 per cent of GDP, which does not allow Japan to really become involved in ‘remote southwestern areas’. Japan’s military presence in the South China Sea, and in the waters of the Indian Ocean, can be suitably characterised by the term ‘marked on the map’, because its scale cannot be compared with similar presences in those same regions on the part of the United States, China, and India.

Nowadays, what will happen next with Japanese defence policy is something that apparently nobody knows, including the country’s leadership. In the author’s opinion, everything will pretty much be decisively determined by how Japanese-Chinese relations develop, which have, it must be repeated, been marked by negative trends in recent months. And this despite the fact that all last year both Tokyo and Beijing kept sending signals about the desire to settle the political ‘friction and misunderstanding’ dividing the two.

Great expectations were placed on the visit to Japan that the leader of the People’s Republic of China, Xi Jinping, had planned for the spring (the first at this level since 2008), which at the last moment was postponed ‘until the autumn, or even later.’ The COVID-19 pandemic was officially announced as the cause. However, autumn is approaching, and there are no signs of preparations for the ‘postponed’ visit by the Chinese leader.

However, information has come to light about influential circles in the ruling Liberal Democratic Party expressing opposition to any intentions by prime minister Abe to hold that kind of meeting. The visit, which is extremely important for both countries, was torpedoed under the guise of the restrictions on contact with foreigners that were introduced in Japan owing to the COVID-19 epidemic.

Over the past few months, the Japanese side has taken (or is planning) actions that in no way contribute to creating an atmosphere that is at least halfway favourable for resuming debate on the topic of the Chinese president making a possible visit. The author will only note how Tokyo (along with Washington) has ratcheted up its activity in Taiwan, and increasingly distinct talks about Japan joining the ‘Five Eyes’ intelligence alliance, which unites major Anglo-Saxon countries.  And that same COVID-19 factor that nobody is dropping from the political agenda. ‘Incidentally’, as they say.

But perhaps the greatest cause of concern for Beijing might be Shinzo Abe’s visit to India, scheduled for September 10 but for which they have begun to discuss various aspects of the upcoming talks between the Japanese visiting politician and prime minister Narendra Modi well in advance.

Though just one of the many summits held in recent years between the leaders of two out of several leading regional players, this is the one that warrants particular attention. There is a high probability that it will be an important stage in a lengthy process of rapprochement between Japan and India that represents one of the principal trends in this regional political game.

Incidentally, this could also be viewed as the realisation (but through different means) of that same Japanese course of ‘towards the southwest’ during WWII. It should be noted that, just like back then, today influential forces exist in India that can relate to this ‘movement’ with complete understanding.

This ‘understanding’ has been greatly facilitated by yet another incident that happened in May this year, and that has sharply exacerbated the situation in one of the mountainous areas along the Chinese-Indian border in Ladakh. Judging by the latest reports, progress with talks between representative delegations from both sides, which have been going on since the start of July, have come to a standstill. The reader may remember how a similar conflict that occurred three years ago in Doklam led to a ‘historically unofficial’ meeting in Wuhan between both countries’ leaders, one that seemingly ushered in a new era in relations between the two Asian giants.

Now, even the possibility of some ‘new Wuhan’ taking place is not discernible. Moreover, in the area of conflict the clangour made by cutting-edge weaponry is distinctly audible. There are reports, for example, about the start of ‘reconnaissance flights over the highlands’ by the first five Rafale fighter jets that arrived from France as part of a deal to deliver 36 of these jets to India.

In response, a publication by Chinese military experts argues that the Rafale jets ‘have no chance’ against the latest fifth-generation J-20 fighters that are already being put into service by the Chinese air force. This was followed by a note that a pair of these fighters was ‘discovered’ at an airfield 300 kilometres from the mountainous area along the Indian border.

This means that a political and strategic background is taking shape in the region that is quite conducive to building the abovementioned ‘Quartet’, and the upcoming visit by Shinzo Abe to India will be an important step in this direction, as was the video summit held on June 4 between Narendra Modi and Australian prime minister Scott Morrison. The author would like to recall that Japan and Australia are already (quasi) allies.

During Abe’s visit to Delhi, it would be good to see some kind of a miracle, which would not be the next stage in building an ‘Asian NATO’ but, for example, putting forth mediation efforts to resolve the conflict in Ladakh, and not just to form an arrangement aligned against China, but one that involves it.

But miracles do not happen, even in serious fairy tales. Everything that has been happening recently in a key area on the world gaming table evokes associations with one of those where the main character goes to the shores of the ‘blue sea’ to get answers to some questions.  And, with each successive visit, the seascape changes for the worse.

Right now, the label ‘in turmoil’ would certainly best describe the state of the Indo-Pacific (political) seas.

New Eastern Outlook, August 26. Vladimir Terekhov is an expert on issues of the Asia-Pacific region.