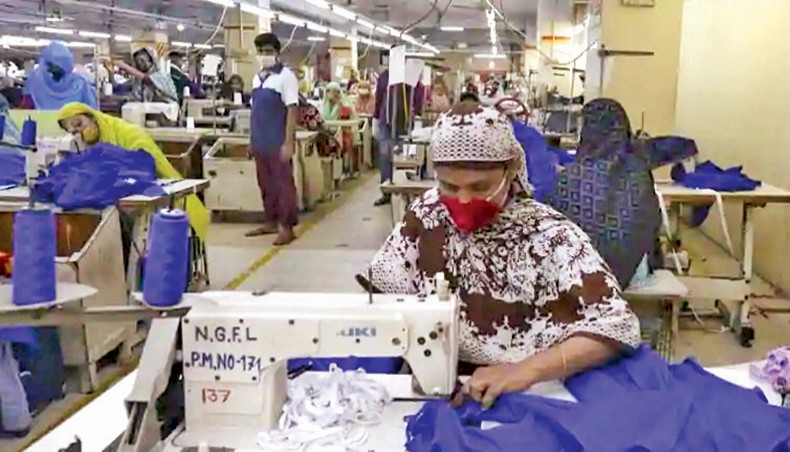 A file photo shows workers wearing facemasks sewing clothes in a garment factory in Dhaka in May.  Global apparel buyers adopted a strategy of offloading their COVID-19-induced financial troubles onto suppliers by placing small volumes of orders and asking for lower prices from previous orders, according to a recent global report. — AFP photo

Global apparel buyers adopted a strategy of offloading their COVID-19-induced financial troubles onto suppliers by placing small volumes of orders and asking for lower prices from previous orders, according to a recent global report.

The report titled ‘Cost and Cost Negotiation and the Need for New Practices’ conducted by the Better Buying Institute found that buyers had started placing new orders but the volume was lower than the previous seasons.

According to the report, the reduced volume of orders and lower prices reflected the ongoing uncertainty around how phased re-openings and emergence of new outbreaks across the globe will impact consumer demand.

‘The next two most frequently reported pricing and ordering strategies, smaller volumes at the same price (51.0 per cent) and lower target prices from previous orders (40.1 per cent), highlight the financial hardship the industry continues to face – as well as the prevailing strategy of offloading financial pressures onto suppliers,’ the report said.

Cost and cost negotiation practices were discussed in the global supplier survey for the period of June 25 through July 13, 2020 in participation of 147 suppliers from 30 countries, including Bangladesh.

He said that many factories in the country might fail to maintain social and environmental compliance standards due to the cost negotiation practices of buyers during the coronavirus pandemic.

The Better Buying Institute found that three groups had emerged during the COVID-19 pandemic and their adopted strategies were labelled — pressuring suppliers through price competition, off-loading additional costs onto suppliers and buyer-centric costing.

‘Of these groups, the strategies that involve pressuring suppliers through price competition have the highest average impact on suppliers’ business profitability,’ the report said.

The impact of high-pressure cost negotiation strategies was not limited to suppliers’ business profitability; pressure on supplier businesses overflows onto workers and the environment, it said.

Over half of the suppliers in the latest global supplier survey reported that their business profitability had a high impact (a 4 or 5 on a scale of 1 to 5) on their ability to provide good working conditions and better wages with 28.6 per cent of suppliers reporting the maximum level of impact.

On average, the extent to which suppliers’ profitability impacted their ability to provide good working conditions and better wages was 3.5 on a scale of 5.

Meanwhile, 43.5 per cent of suppliers reported that their business profitability had a high impact on their company’s environmental performance.

The average extent to which suppliers’ profitability impacted their environmental performance was 3.2 on a scale of 5, the report said.

Citing the 2019 ratings cycle, the report said that 55.2 per cent of suppliers faced high-pressure cost negotiation strategies, with individual company performance scoring between 21.3 per cent and 100 per cent.

‘The two strategies most frequently rated as having a high impact (a 4 or 5 out of a scale of 1 to 5) were demanding level prices be maintained from year-to-year – no consideration for inflation (64.6 per cent of suppliers rated this as a ‘4’ or ‘5’) and take it or leave it – meet the target cost or supplier cannot win the order (63.9 per cent),’ the report added.

Hatem said that the buyers were trying to take advantage in many ways during the pandemic.

He said that the buyers were making changes to product specifications after the FOB price was locked and in many cases, they were asking for additional operation on the products but were not approving any up-change in prices.

Senior vice-president of Bangladesh Garment Manufacturers and Exporters Association Faisal Samad said that price pressure on the suppliers was not new but both suppliers and buyers now remained under pressure as a result of the uncertainty in global business caused by the pandemic.

He said that the government should make it easier for the readymade garment sector to avail incentive or else it would be difficult for the factories to remain compliant during the pandemic.