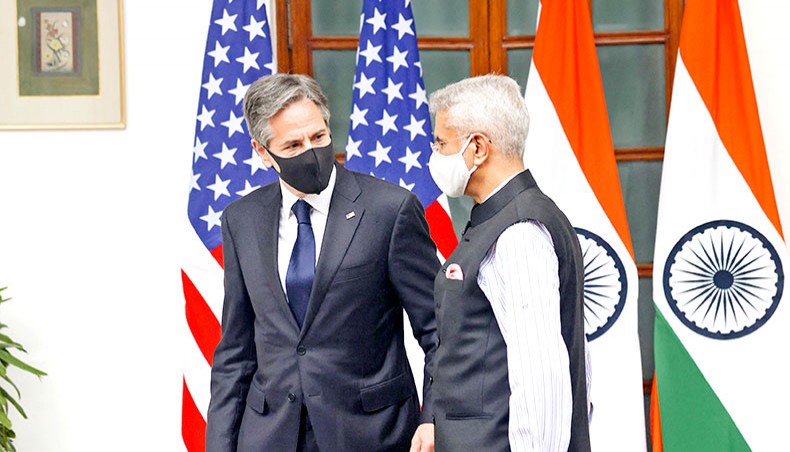 US secretary of state Antony Blinken issued a veiled warning on Wednesday about Indian democracy backsliding in his first official visit to Washington’s important ally.

Rights groups say civil liberties and the space for dissent are under increasing attack in the world’s biggest democracy under prime minister Narendra Modi’s government.

Blinken told a joint news conference with foreign minister Subrahmanyam Jaishankar that the US and India ‘take seriously our responsibility to deliver freedom, equality and opportunity to all of our people.’

But he added that ‘we know that we must constantly do more on these fronts, and neither of us has achieved the ideals that we set for ourselves.’

Democracies should ‘always seek to strengthen our democratic institutions, expand access to justice and opportunity, stand up forcefully for fundamental freedoms,’ Blinken said.

Under Modi, India has made growing use of anti-terrorism legislation and ‘sedition’ laws to arrest campaigners, journalists, students and others, critics say.

The government denies cracking down on criticism and says people of all religions have equal rights.

Behind closed doors, Indian officials were expected to express alarm over Taliban gains in Afghanistan and to press Blinken for more support in the border standoff with China.

US-India relations have historically been prickly but China’s growing assertiveness has pushed them closer, particularly since deadly clashes last year on the disputed Indo-Chinese Himalayan frontier.

But according to Brahma Chellaney, strategic affairs expert at India’s Centre for Policy Research, US backing has ‘slipped a notch’ since Joe Biden took over from Donald Trump as president in January.

‘India is locked in a military standoff with China but unlike top Trump administration officials who publicly condemned China’s aggression and backed India, no one in Team Biden has so far lent open support to India,’ Chellaney told AFP.

India is worried that a possible takeover by the Taliban, which it sees as backed by its arch-rival Pakistan, will turn the country into a base for militants to attack India.

India, a firm backer of the Afghan government with billions of dollars in development aid, recently evacuated 50 staff from its Kandahar consulate due to the worsening security situation.

Blinken told the news conference that despite withdrawing troops, the United States ‘remain very engaged’ in support of the beleaguered Afghan government, providing security support and other assistance.

‘There has to be a peaceful resolution which requires the Taliban and the Afghan government to come to the table,’ Blinken added.

Afghanistan after a Taliban takeover would be a ‘pariah state,’ he said.

India is part of the Quad alliance with the United States, Japan and Australia, seen as a bulwark against China.

Blinken and Jaishankar sought to blunt Chinese criticism of the grouping, with Blinken saying it was not a ‘military alliance’.

‘Its purpose... is just to advance cooperation on regional challenges while reinforcing international rules and values that we believe together underpin peace, prosperity and stability in the region,’ Blinken said.

Jaishankar said that ‘people need to get over the idea that somehow other countries doing things is directed against them. I think countries do things (that) are in their interest for their good and for the good of the world, and that is exactly what is the case with the Quad.’

The talks in a monsoon-soaked New Delhi were also set to cover joint efforts on making Covid-19 vaccines and climate change.