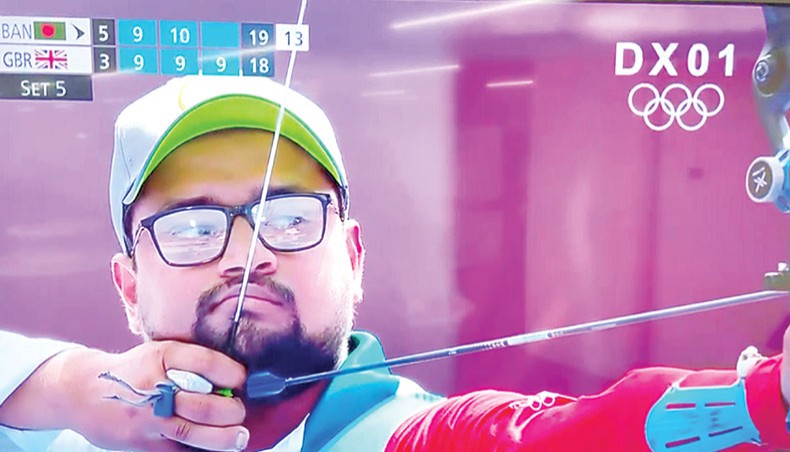 Bangladesh’s premier archer Ruman Shana fought hard but fell one point short in his second round match of the round of 32 against Canada’s Duenas Crispin in the recurve men’s individual event at the Yumenoshima Park Archery Field in Tokyo, which ended his campaign in the Tokyo Olympics.

The 17-seeded Shana lost to the 16-seeded Crispin by 4-6 set points in the pre-quarterfinal stage after starting the round of 32 with a brilliant 7-3 set points win against the 48-seeded Tom Hall of Great Britain.

The second round game was tied on 4-4 set points at the end of the fourth set, with Shana winning the first and fourth set and his Canadian counterpart winning the two in between.

Both Shana and Duenas were on 17 points after the first two shots of the final set, with Shana scoring nine and eight points and Duenas scoring seven and 10 points respectively.

It all came down to the final shot, but while Duenas’ arrow landed on nine, Shana’s arrow landed on the circle with eight points, giving Duenas the win by the narrowest of margins.

Shana needed 10 points to win or nine to take the contest into a tie-breaker set, but he couldn’t do either and the fifth set’s score sheet read 25-26 against the 26-year-old.

Shana, who was the country’s main hope in ending its long wait for a medal in the Olympics, was heartbroken with the narrow defeat.

‘I’m really a little bit upset because 10 (was needed) to win (in the last shot). I had a very good chance to win this match,’ Shana said in his immediate reaction after the elimination.

But Bangladesh’s lone direct qualifier for the 32nd Olympics has already set his sights on the next two editions of the sporting extravaganza, with an aim to win the gold medal in the 2028 Games.

Bangladesh’s other archer in the Games, Diya Siddique, will compete in the recurve women’s individual event on Thursday.

The 36-seeded Diya will take on the 29-seed Karyna Dziominskaya of Belarus in the round of 32.

Earlier on July 24, the pair of Shana and Diya got eliminated from the recurve mixed team event after losing to eventual gold medallists San An and Kim Je Deok from South Korea by 6-0 set points in the round of 16.