Ordeal of ‘abandoned wives’ in UK 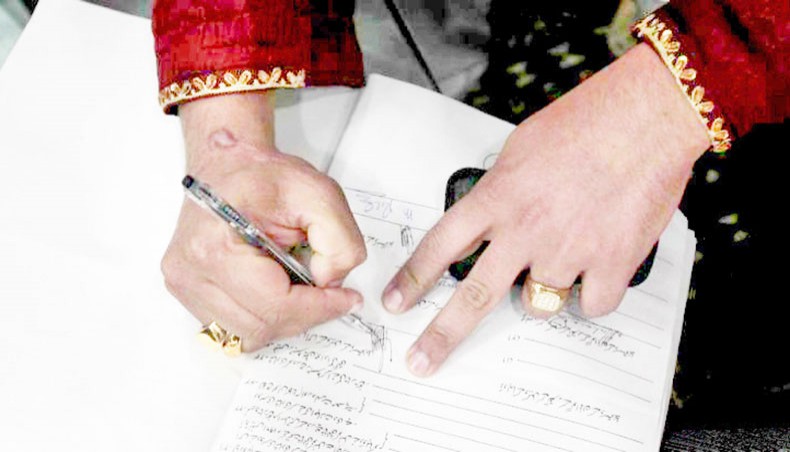 Many marriages to British Asian men are accompanied by false promises of improved finances. Later when the men abandon their wives to return to the United Kingdom, some brides’ families find themselves saddled with debt, writes S Khan

SANA Hafeez, 28, from the Pakistan-administered Kashmir, had hardly started the 10th grade when her family arranged her engagement to her British-born cousin Muhammad Bilal Choudhary.

Although Hafeez had wanted to become a civil servant after completing her education, she was excited by the prospect of going to the United Kingdom. She thought it would help ease her family’s financial troubles and provide her with an opportunity to get an education and a good job.

‘But to my surprise, my fiance and his family asked me not to pursue my studies beyond grade 12’, she revealed. ‘I was heartbroken, but the prospect of going to the UK and supporting my family financially was still a solace.’

The pair remained engaged for five years and married in August 2018. Her husband left for the UK a week after the marriage, and both he and her in-laws promised to take her there as well, said Hafeez.

Hafeez is one of many women from her region who have been married off to British Asian men in the hope they can help their families financially. But lawyers and women’s rights activists say that many of these marriages often go awry.

Several residents of Hafeez’s district of Mirpur have family members in Britain. Many people left in the 1950s and 60s, when the construction of a large dam affected thousands in the district. Over the years, through marriages, asylum, work permits and family connections, many have made their way to the former colonial power.

‘“For a year we remained engaged and talked over the phone’, Hafeez recalled. But her fiance’s attitude started to change in 2019. ‘When I insisted on coming to the UK, he started hurling slurs and insults and finally filed for divorce in May of this year’, she said, fighting back tears.

‘It was a bombshell for me and the family. He wasted eight years of my life’, she said. Additionally, her family had to borrow money to pay for the marriage — money which they thought could be repaid once she was settled in the UK. ‘I could have become a civil servant or gotten a higher education. Who will compensate me for all my losses?’

‘Since the 1990s, I have heard and seen thousands of cases of such women’, admitted Lodhi. ‘Because of the conservative nature of our society they cannot share their ordeals.’

Lawyer Ifzal Ahmed Khan has witnessed many similar cases. Khan gave one example of a British Asian man, originally from the town of Bhimber in the Pakistan-administered Kashmir, who married his cousin Sadaf more than seven years ago. He stayed with her for a few years and abandoned her after the birth of a baby boy. The man later divorced his cousin, Khan said, adding that the man is now threatening to take the child.

Sardar Abrar Azad, an activist in Mirpur, says his friend’s sister was also abandoned after being married to a British Asian. According to Azad, poverty is what drives families to marry off their daughters to British Asians. He added that people are often so desperate to send their daughters to the UK that they do not pay much attention to the character of the husband-to-be.

Many of the men turn out to be utter frauds, Azad said. ‘Instead of taking the girls back, they stay here for months while the girls’ families bear their accommodation expenses.’

While poverty is one reason young women are married off, some parents seek husbands for their daughters in order to strengthen existing family ties, he said.

Most of the girls, advocate Lodhi said, are from impoverished families, who hope that their daughters will call one of their brothers to the UK or will themselves work there and send money back. What seems like a dream can soon turn into a nightmare, she said.

‘I think parents need to seek the consent of their sons and daughters who are born and brought up in the UK under completely different socio-economic conditions’, said Sardar Attique Ahmed Khan, former prime minister of the disputed territory.

He believes that a lack of consent leads to the breakup of such marriages. ‘The man and woman should be given a chance to communicate with one another and understand each other before they decide to marry’, he said.

In Mirpur, the British Asian men marrying local women are gaining an increasingly bad reputation. Lodhi claims that almost half of them are already married. In one case, a British Asian man married more than six times. ‘Most of these men are over 40 and even 60 in some cases’, Lodhi said.

‘They know most of their victims are poor and cannot do anything against them’, said Khan. ‘So they marry here, and spend a few months or years impregnating women. In some cases, they take the kids with them, and in others they leave both the wife and kids here, and ruin their lives.’

‘It is sheer debauchery and lust’, Khan added. ‘How else would you describe it?’

Attique Khan believes that society has to take steps to stop such marriages. ‘Efforts could be made at the government level, but civil society has to create awareness to stop this trend’, he said.