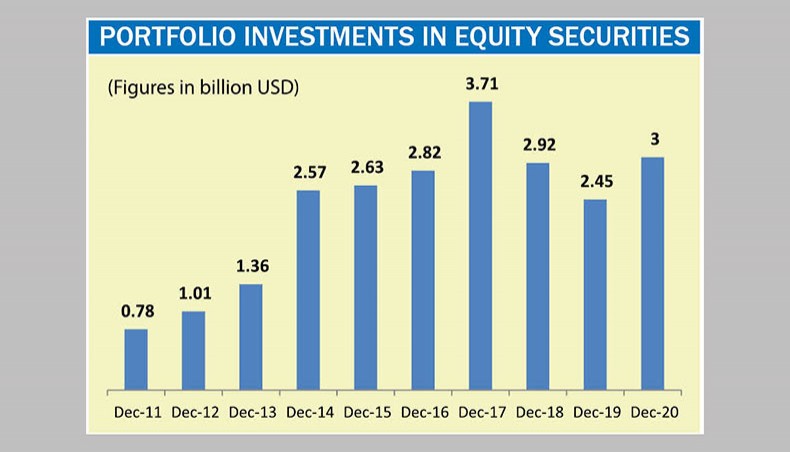 Stock of portfolio investments, meant for the stock and bond markets, in the country rebounded by 17.66 per cent or $710.17 million in 2020 when major global economies witnessed a sharp increase in liquidity amid the launch of bailout packages to offset the economic impacts of the Covid outbreak.

However, net investment in equity securities (in terms of transactions) was in the negative, according to a Bangladesh Bank report on investments released on Thursday.

The data showed that the stock position of portfolio investments in the country’s stock and bond markets stood at $4.73 billion at the end of 2020 from $4.02 billion in 2019.

Of the $4.73 billion investments in 2020, investments by foreign companies in equity shares accounted for $2.995 billion and the remaining $1.74 billion was invested in debt securities.

Announcement of massive stimulus packages by the governments was another reason behind the excessive supply of liquidity, Mansur said.

‘In Bangladesh, we were getting a little share of the investments,’ he said, adding that the stock of investments was still not significant.

However, such portfolio investments are not stable as they change their destinations with the change in the investment situation, he said.

Besides, he also mentioned that the country’s stock market did not have adequate quality scrips for foreign portfolio investors to invest their money in.

Good scrips are very much overpriced and are not available as no one sells them, the executive director said.

UK’s portfolio investments in Bangladesh was the second highest at $662.98 million at the end of 2020. The country’s investments almost doubled in 2020 from $346.72 million in the previous year.

In 2019 and 2020, Luxembourg’s investors withdrew $111.38 million of portfolio investments in equity shares from Bangladesh.

The country’s pharmaceuticals and chemical sectors attracted the highest overseas equity investors as their investment stock in the sector reached $1.06 billion at the end of 2020 from $521.62 million a year ago.

Besides non-resident transactions on the stock market, the central bank in its report also showed that the investors withdrew $338.43 million in investments from the country through the NITAs (non-resident investor’s taka accounts) in 2020.