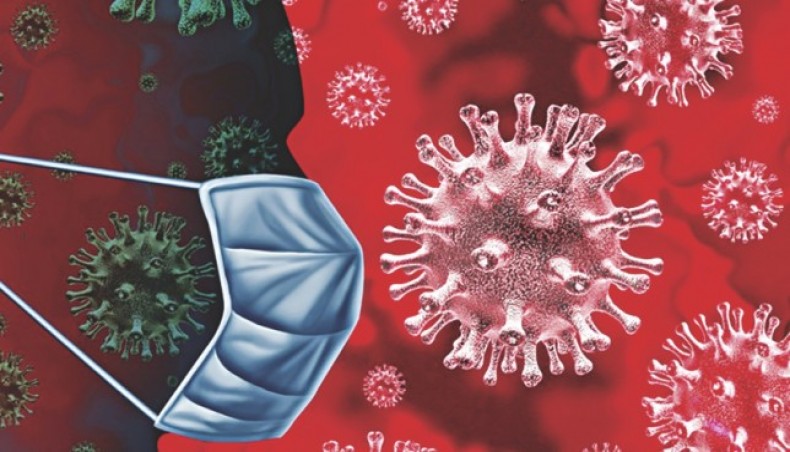 Continuing the trend of upward records, the number of daily Covid cases in Bangladesh again broke record on Monday with the highest 13,768 new infections reported after the pandemic began in the country.

The country logged its top six figures of daily infection in the past seven days with over 11,000 new cases recorded on each of the days finding over 31 per cent of samples tested coronavirus-positive.

The health ministry also reported the second highest 220 daily Covid deaths in the 24-hour period till 8:00am Monday, after counting the highest daily death toll from the disease the previous day.

This was the fourth day that the daily Covid death toll crossed 200 in six days after Bangladesh first saw 200 people die on July 7.

‘We are witnessing an unbelievable spread of Covid infection, which looks certain to make our situation utterly dire,’ Abu Jamil Faisal, a member of the public health expert group of the Directorate General of Health Services, told New Age.

Jamil came up with the comment hours after the government indicated that the ongoing strict restrictions imposed 12 days ago were likely to be relaxed.

‘It would then be a time to “save your own life”,’ Jamil said, adding that relaxing movement restrictions would push up the infection figure.

Dedicated Covid hospitals with chronic shortages of manpower, beds and oxygen have been struggling to tackle the increasing flow of Covid patients.

Some two dozen Covid patients died in three government hospitals this month reportedly after their oxygen supply failed while dozens rushed to the capital daily over the last week for intensive care unit facilities from all over the country.

The overall Covid death toll in the country has reached 16,639 and the number of cases 10,34,957 since the disease’s emergence in the country was officially announced on March 8, 2020.

The latest 220 deaths occurred in 48 districts, representing some 75 per cent of the country’s administrative area, with the highest 34 deaths recorded in Dhaka.

The districts of Tangail, Cumilla, Jashore, Jhenidah and Khulna recorded 10 to 15 deaths each while Chattogram and Kushtia recorded nine deaths each.

The districts with high daily deaths continued to report 30 per cent to 40 per cent positivity in the samples they tested daily.

On Monday all but one of the country’s eight divisions reported over 30 per cent coronavirus positivity rates with the highest 45 per cent recorded in Barishal division.

Rajshahi division, where the second wave of the coronavirus outbreak started in late May, saw 24 per cent samples turn out Covid-19 positive in the 24 hours until Monday morning.

The latest Covid wave is believed to have been fuelled by the Delta variant, considered the variant of concern detected first in India, which lately caused the world’s some of the worst Covid statistics.

In Bangladesh, eight districts reported about 50 per cent daily test positivity while 16 reported a 40 per cent rate on Monday.

The highest daily test positivity rate of 66 per cent was reported by Gopalganj district.

The government figures are widely considered underestimation of the real situation because of low test coverage.

In rural areas few people can have a test, the cost of which is still considered a burden in poverty-ridden rural Bangladesh, with many of them dying with Covid symptoms at home.

Virologist Nazrul Islam, a member of the national technical committee on Covid-19, said that that the indication of easing the ongoing restrictions would encourage people to come out of home in greater numbers, fuelling a further spike in Covid cases.

‘The government continued to show its lack of interest in combating the viral disease in a scientific way,’ said Nazrul, referring to the last Eid when extensive public movement occurred facilitating the spread of the Delta variant from bordering areas to the rest of the country.

The Institute of Epidemiology Disease Control and Research was reported to have found 80 per cent of samples it genome-sequenced in June contained the Delta variant.

The relaxation of restrictions ahead of Eid-ul-Azha due in eight days is likely to encourage hundreds of thousands of readymade garment and migrant workers to take risky crowded journeys home outside the capital, experts fear.

Of the 220 people who died during the latest 24-hour reporting cycle, 142 were men and the rest women.

Government hospitals recorded 167 of the new deaths and private hospitals 40 deaths while 13 died at home, according to the DGHS daily Covid update.

Division-wise, Dhaka reported the highest 64 deaths, followed by Khulna with 55 deaths, Chattogram with 37 deaths, Rajshahi with 23 deaths, Rangpur with 18 deaths, Mymensingh with 13 deaths, Sylhet with 6 deaths and Barishal with 4 deaths.

The New Age correspondent in Manikganj reported that the district confirmed its highest daily 91 Covid cases on Monday.

The Mymensingh New Age correspondent reported that the district saw its highest daily 17 deaths on Monday, including the death of 11 people with Covid symptoms at Mymensingh Medical College Hospital.