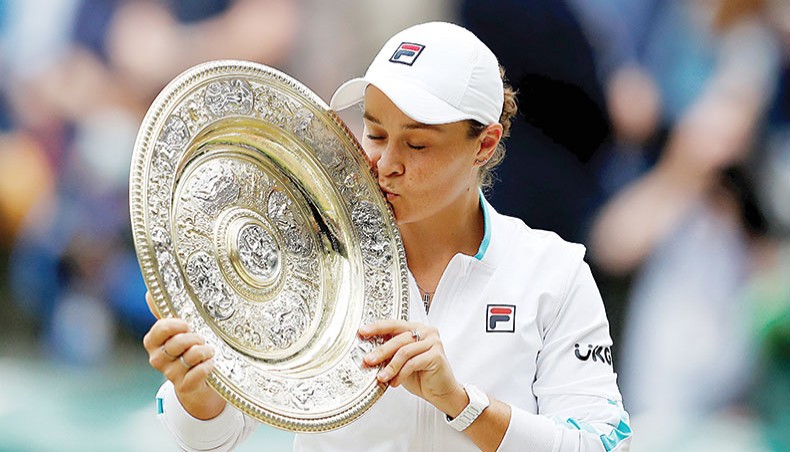 Her victory came a half-century after her ‘friend and mentor’ first triumphed on the grass courts.

Barty wore a dress inspired by the one Cawley sported in the 1971 final, and the 69-year-old was overcome with emotion watching her win.

‘I'm just so very proud of Ash, the way she handles herself not just on the court but off the court too,’ said seven-time Grand Slam singles champion Cawley, who won Wimbledon a second time in 1980.

‘Ash to me is like a little sister and part of my family. I think we treat each other that way.

‘I was just so chuffed when she wore that dress ... wasn't that lovely. I said to her 'if it brings you luck, great, because it bought me luck'. She's amazing.’

Barty spoke with Cawley prior to The Championships and said she was a role model to her.

‘I think she has been iconic in paving a way for young indigenous youth to believe in their dreams and to chase their dream,’ said the world number one, who has Aboriginal heritage on her father's side, after winning.

‘She's done exactly that for me as well. Her legacy off the court is incredible.’

Cawley said one of the last messages she sent Barty was ‘dreams do come true, they came true for me’.

‘All the way through (the final) I sort of had this feeling that she was going to win, this is her time. Somebody up there is looking down on her.’

Barty's parents Josie and Rob watched their daughter lift the trophy from Australia and said they were ecstatic.

‘I'm just proud of the way she treats everybody, she's still the same person regardless of the tennis,’ said her mum.

‘Just really excited and so happy she has done it this year too, it's such a lovely year to do it with Evonne's anniversary.’

‘Massive pride in our girl!,’ tweeted Freeman, who famously lit the cauldron at the 2000 Sydney Olympics and then became the first Aboriginal Australian to win an individual gold medal in the 400 metres.

‘Congratulations @ashbarty! We are all so very proud of you.’

Laver, the only player to win all four majors in the same season twice, also noted it was ‘a wonderful follow up to Evonne's win on the 50th anniversary’.

‘So happy for you @ashbarty, your dream comes true and what a fight. Congratulations on your Wimbledon victory,’ he added.

Prime Minister Scott Morrison called her triumph ‘magnificent, inspirational’ and even Australian pop royalty Kylie Minogue got in on in the act, simply tweeting: ‘ASSSSSSSSHHHHBAAAARRRTYYYYYYYY!!!’

Barty will now head to Tokyo for a crack at Olympic gold, where she will be hot favourite, before turning her attention to the US Open, with Australian media holding high hopes.

‘Olympic gold and a third slam title is more than achievable in the coming months,’ said the Sydney Daily Telegraph. ‘But Ash must also ensure she takes the time to look after herself and her team.’

The Australian broadsheet was effusive in its praise.

‘The most worthy of winners. A player universally respected and adored nationwide for her brilliance and sportsmanship,’ it said.