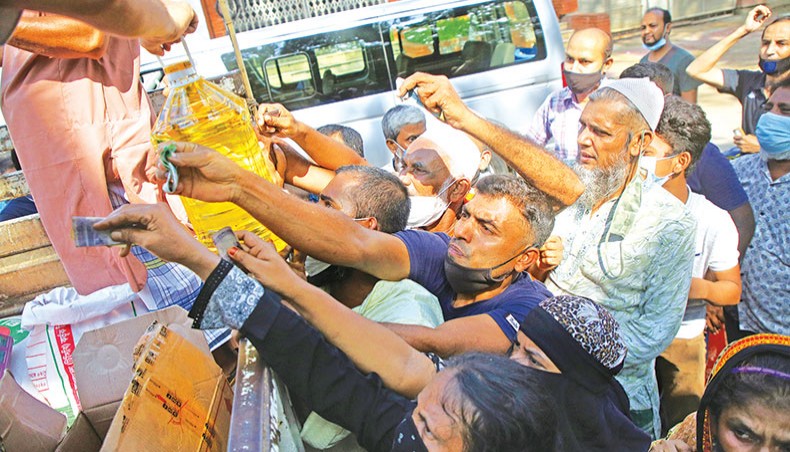 People crowd around a Trading Corporation of Bangladesh truck operating open market sales of essential commodities in front of the National Press Club in the capital on Monday. — Sony Ramany

The open market sales points of the Trading Corporation of Bangladesh on Monday witnessed long queues of consumers as the prices of essential commodities have continued rising on the markets in the capital Dhaka amid the Covid outbreak.

The TCB on Monday began a nationwide OMS of essential commodities at subsidised prices in a bid to keep the prices of essential items stable on the market amid the ongoing strict Covid restrictions and ahead of Eid-ul-Azha, one of the biggest religious festivals of the Muslims.

It was found that a good number of people waiting in queues in different spots at Rampura, Khilgaon, Shahajahanpur, Sabujbagh, Motijheel, Mohammadpur, Shyamoli and Mirpur in Dhaka from 9:00am to buy the TCB goods though the trucks came much later.

The TCB on Sunday announced that the state-run enterprise would sell three commodities, including sugar, red lentil and soya bean oil, at subsidised rates in Dhaka and other metropolitan cities, district and upazila towns across the country, from Monday.

Under the open market sales programme, a total of 450 mobile trucks are scheduled to sell the TCB products across the country till July 29.