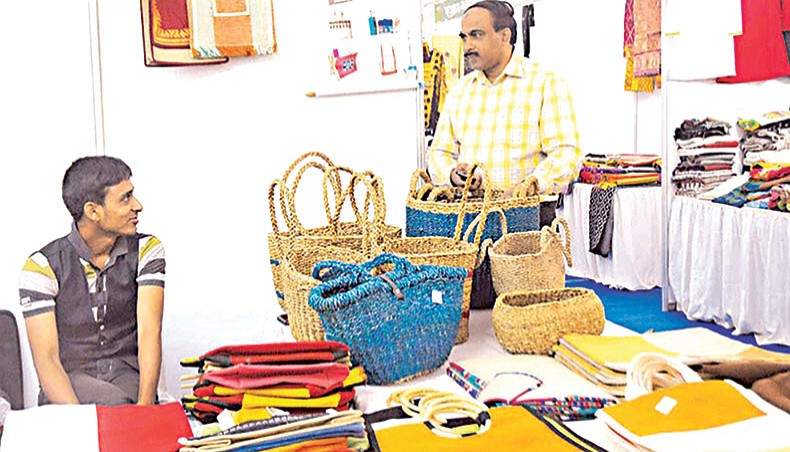 A file photo shows traders selling products at an SME fair. Eighty-three per cent of small and medium enterprises has not got funds from stimulus packages while 69 per cent of the SMEs failed to pay staff wages and other fixed costs due to the Covid outbreak, according to a rapid survey.— New Age photo

Eighty-three per cent of small and medium enterprises has not got funds from stimulus packages while 69 per cent of the SMEs failed to pay staff wages and other fixed costs due to the Covid outbreak, according to a rapid survey.

The survey, conducted in February by the Business Initiative Leading Development and the Policy Exchange Bangladesh, found that the sales of 86 per cent of firms were negatively impacted due to the pandemic and 95 per cent of firms reported a depressed demand currently compared with that in the pre-Covid scenario.

M Masrur Reaz, chairman of the Policy Exchange Bangladesh, on Thursday presented the report titled ‘Covid Stimulus and Links to Employment, Consumption and Investment: The Bangladesh Experience, Global Lessons, and Priorities for Next Round Support’.

He said in the presentation that the design of the government-announced stimulus packages was not adequately inclusive because of a lack of consideration of the challenges and needs of small entrepreneurs.

Masrur said that the working capital support and the overall design of the packages lacked incentives for employers to sustain employment.

Citing examples of stimulus packages in different countries such as Germany, India, China, Vietnam and the United States, he proposed several short- and long-term recommendations for a robust next round of support.

Mustafizur Rahman, distinguished fellow of the Centre for Policy Dialogue, recommended segmented stimulus considering the 60.5 million labour forces of which 4.4 per cent are employees, 44 per cent self-employed, 11.55 per cent family helpers and 15.5 per cent labour.

He said that the stimulus packages should focus on employment generation.

Rizwan Rahman, president of the Dhaka Chamber of Commerce and Industry, said that the government should simplify the terms and conditions for the informal sector to avail stimulus packages.

‘The cash flow system needs to be taken into account as the Covid-19 has hit the GDP growth, employment generation, SME sector, consumer demand, retail and tourism sectors,’ he said, adding that the other economic indicators were also facing a slow momentum.

Md Masudur Rahman, chairperson of the SME Foundation, said that the government had announced two stimulus packages for the SMEs but the disbursement process from the end of the commercial banks were not adequate.

‘As most of the SMEs are from an informal sector that makes them unable to be bankable,’ he said.

The upcoming stimulus package should be focused on inclusive areas to ensure continuity of the growth of investment, productive employment and the social safety net programme, he said.

Planning minister MA Mannan said that the government would consider the demand of the bottom line of society if a second stimulus package was formulated where importance would be given to activating more SME supportive organisations.

He said that the proposed national budget for FY 2021-22 has focused on the continued economic recovery amid the pandemic.

Referring to the recent UNCTAD report, the minister said that the government was always welcoming greenfield foreign direct investment in Bangladesh considering the quality of the investment.