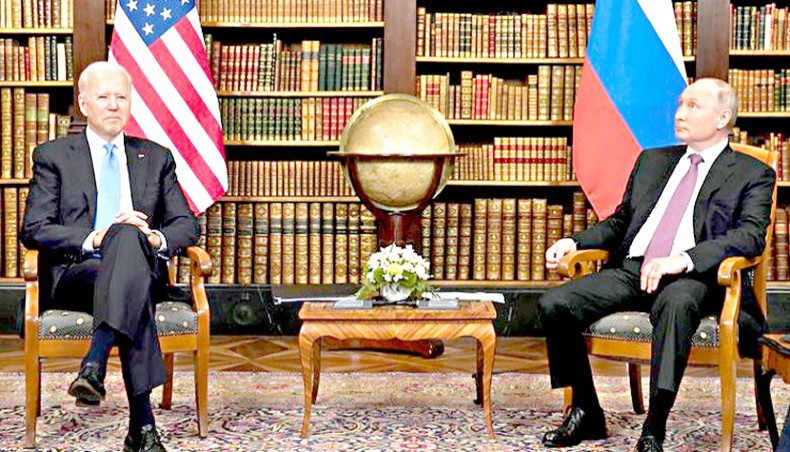 THE meeting between the presidents of the Russian Federation and the United States, Vladimir Putin and Joe Biden, held on June 16 in Geneva, was certainly a notable event in modern politics. As expected, it garnered attention among the public for a variety of reasons. And the interest in the summit has continued to grow due to the lack of available information about what was actually discussed during the talks.

It is unlikely that one could get the whole picture about the meeting based on the three paragraphs in the official joint statement issued at the end of it. Still, stating that ‘a nuclear war cannot be won and must never be fought’ and that the United States and Russia would ‘embark together on an integrated bilateral strategic stability dialogue in the near future’ (which would be deliberate and robust) gives some cause for optimism. After all, the relationship between the two nuclear powers was at a particularly low point before the recent summit.

At this point, the author would be remiss not to mention the following. First of all, it has often been said that the US’s and Russia’s entire nuclear arsenals, if used, could wipe out the human civilisation many times over. Still, each human is born and dies only once. And nowadays three other members of the ‘nuclear club’, ie, the United Kingdom, France and the People’s Republic of China are also capable of annihilating the human race (or killing the majority of people) in one fell swoop. In addition, both India and Pakistan are de facto nuclear weapon states. Israel’s status in this regard is viewed as undeclared.

All five (or perhaps six) of these nations have something in common. They seemingly do not wish to be a part of the US-Russia talks aimed at stopping the nuclear arms race and reducing or limiting arsenals of strategic offensive (doomsday) weapons, or at least not until the United States and the Russian Federation decrease their stockpiles to ‘acceptable’ levels. Each of the five (or six) aforementioned countries appears to have its own view of what size arsenal is reasonable.

In addition, Moscow’s partner in the strategic dialogue has been trying to get it to convince China to join these talks on nuclear disarmament (but without also attempting to involve the UK or France in them). A year ago, a top official from Russia’s ministry of foreign affairs said, ‘Russia would be unable to force China to join the negotiations and was unwilling to try’.

Nonetheless, the author does not believe that a nuclear war, with all of its dire consequences, is at all likely at present. And yet, any agreements reached by the US’s and Russia’s leaders in Geneva remain of the utmost importance.

The second point concerns China’s ever-increasing role on the global stage. The author will focus on its trade and economic impact, ie, a key element of the current stage of the global chess game. Based on combined economic indicators, China is a worthy rival to the United States. And some forecasts indicate that China will become a bigger economic powerhouse than the current hegemon not only in terms of quantitative but also qualitative indicators.

It is also worth noting that China’s ever-increasing economic prowess has noticeably contributed to this nation’s growing clout on the global political arena, first and foremost via its Belt and Road Initiative.

Only recently (under the new administration) have officials in Washington DC come to realise where the threat to its leadership on the world stage actually lies. Discussions about joint measures that could be taken to counteract China’s growing influence, which is a key challenge to the west (an increasingly ambiguous term) and its position, were the focus of the first three (out of four) events preceding the negotiations in Geneva, ie, Joe Biden’s meeting with the UK prime minister as well as his participation in international summits: the G7 and the US-EU talks.

The agenda of the first two events included the ‘Cornwall consensus’, a term coined on the basis of the meetings’ location and the Washington Consensus devised at the very end of the Cold War (as one of its outcomes). Twenty years ago, economic policies prescribed by the latter failed (wreaking havoc in various parts of the world including Russia). One of the key ‘Cornwall consensus’ proposals concerns harnessing science and technology ‘for the common good’.

Still, it is hard to envision how such ambitious initiatives, requiring a great deal of funding, will be financed in the future. The author does not see any point in specifying these amounts as it remains unclear where the money will come from. Perhaps some of these expenses could be covered by China if it is forced to pay out compensation for damages incurred as a result of the coronavirus pandemic. And such an approach would be in line with the means used by the current ‘stewards of democracy’ to deal with challenges posed by their opponents. ‘Others will pay for the trouble that we have caused,’ appears to be their motto.

Economic proposals (in part, aimed at mitigating China’s influence) discussed at the G7 and US-EU summits were not the only items on the agenda, and the NATO summit held in Brussels focused on security-related issues. After these fruitful talks in Cornwall and Brussels, Joe Biden travelled to Geneva.

Shortly before the US president’s meeting with Vladimir Putin, it was widely rumoured that during the talks Russia’s relationship with China (whose representatives were not in Geneva) would be addressed as a part of negotiations. The author would like to iterate that this is mere speculation and it remains unclear whether the subject was raised or not.

In the meantime, one thorny issue is becoming a key concern for the Russian leadership. It has to do with the position the country would have to take in relation to the upcoming global conflict between Cornwall and Brussels supporters and China.

At this stage, it would be remiss not to mention that proponents of the idea, popular in the west, that China poses a threat have become more vocal recently on Russia’s political arena. It is not surprising that such discussions are being had among members of Russia’s pro-western and liberal wing. However, this topic has little to do with liberalism, a political and moral philosophy.

However, it is quite strange that there are supporters of the aforementioned idea among their opposition too. Unlike their political rivals, the former also believe that China ought to pay for damages caused by the coronavirus pandemic. It is in fact possible that the idea of China posing a threat serves as a unifying link between these opposing groups.

Members of both camps justify their views on this topic using arguments concerning the past and present. Two such points, to do with the present, are worth noting. The first could be roughly summed up by the phrase ‘the Chinese are chopping away at our taiga’. In response, posing the following questions (that are clearly rhetorical in nature) would suffice. Are the Chinese doing this in another sovereign nation? Have they not received documents with necessary stamps and signatures that allow them to do just that?

The second point concerns a forecast that a partnership between China and the Russian Federation (if established) will result in them hopelessly falling behind in science and technology. And yet, there are growing concerns in the United States and Europe about the real possibility of China becoming a leader in the sphere of science and technology in the nearest future. And in order to prevent this from happening, Cornwall and Brussels supporters intend to raise vast amounts of money from sources yet unknown.

Points concerning the past are fairly easy to address. The relationship between Russia and China has had its ups and downs. However, it is important to remember that this has little to do with what is happening nowadays. Debates about history ought to take place at universities among staff, students, etc, of history departments. In these educational institutions, the importance of any given issue (which is of little concern to most people) is assessed by the possibility of either defending one’s thesis or needing to do some further work on it. The prospect of the latter is unpleasant but far from deadly even if only one person is concerned.

Russia’s official stance (which the author shares) in its relationship with China was revealed by its president during an NBC interview that took place a few days before the meeting in Geneva. Everything that was said by the Russian leader on this topic appeared to be viewed fairly positively in China. An apt saying ‘don’t blame the mirror for…’ fairly accurately describes the nature of Vladimir Putin’s replies to the interviewer’s repeated questions about human rights. This topic (along with the coronavirus pandemic) remains the focus of anti-China rhetoric. For instance, Uyghur forced labour is often mentioned in such contexts.

Finally, it is worth iterating that the current stage of nation-building in the Russian Federation ought to take into account the current internal and external climate, which is fundamentally different from that of 30 to 40 years ago. In the author’s opinion, there is a clear need to build a constructive and mutually beneficial relationship with China in all areas of intergovernmental cooperation.

New Eastern Outlook, June 24. Vladimir Terehov is an expert on issues of the Asia-Pacific region.