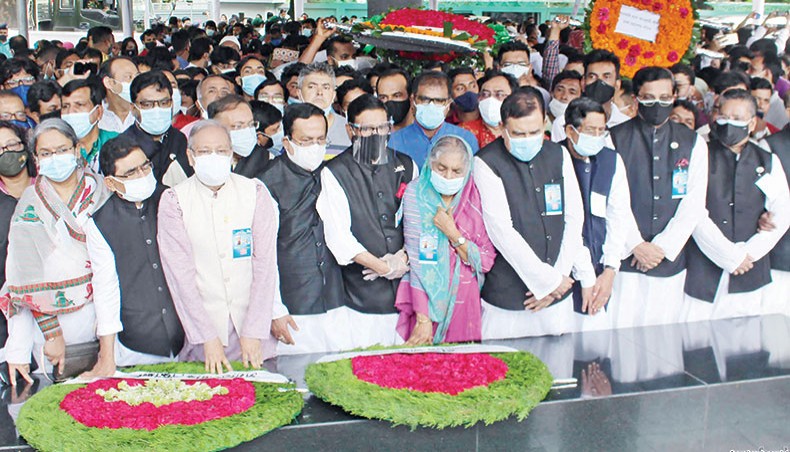 Awami League general secretary Obaidul Quader along with other party leaders places a floral wreath at the portrait of the country’s founding president Sheikh Mujibur Rahman at Dhanmondi 32 in Dhaka marking the 72nd founding anniversary of the Awami League on Wednesday. — New Age photo

Marking the day, the national and party flags were hoisted at all of AL offices across the country while party leaders placed floral wreaths at the portrait of the country’s founding president Sheikh Mujibur Rahman at Dhanmondi 32 in the morning maintaining social distancing.

To mark the anniversary, she placed a wreath at the portrait of Sheikh Mujib at Bangabandhu Memorial Museum at Dhanmondi-32 in the morning.

After laying the wreath, Sheikh Hasina stood in solemn silence for some time as a mark of profound respect to the memory of her father Sheikh Mujib.

Later, AL and its associate bodies placed wreaths at the portrait of Sheikh Mujib in front of Bangabandhu Bhaban at Dhanmondi.

AL general secretary and road transport and bridges minister Obaidul Quader along with other party leaders placed floral wreath as mark of respect to Sheikh Mujib at 9:00am.

Dhanmondi road-32 area was crowded with the AL leaders and activists since the morning and they were seen to chant different slogans including ‘Joy Bangla, Joy Bangabandhu’.

Addressing a discussion marking the day, Sheikh Hasina said, ‘The fate of the people is changing because Awami League is in power. We, all the Awami League leaders and activists, have to stay always beside the people as vanguards as none can play ducks and drakes with their fate.’

Party general secretary Obaidul Quader said, ‘Awami League was with the people in the past, it stands by them now and will remain beside them in the future. No conspiracy can keep Awami League away from the country’s soil and its people,’ he said after placing wreath at the portrait of Sheikh Mujib.’

Obaidul said the 72-year history of the Awami League is the history of struggle, pride, development and achievements.

The party was formed as Awami Muslim League by a breakaway Muslim League faction under the leadership of Maulana Abdul Hamid Khan Bhashani at a meeting at Rose Garden at KM Das Lane in Dhaka on June 23, 1949.

In 1949, the new party elected Maulana Bhashani as its first president and Shamsul Huq as the first general secretary.

The party dropped the word ‘Muslim’ from its name in 1953.

During General Ayub Khan’s 1958-1969 regime, Sheikh Mujibur Rahman consolidated his grip on the party and started earning popularity by organising nationalist movement. Additionally, Suhrawardy’s death in 1963 enabled Mujib to emerge as the sole leader of the party.