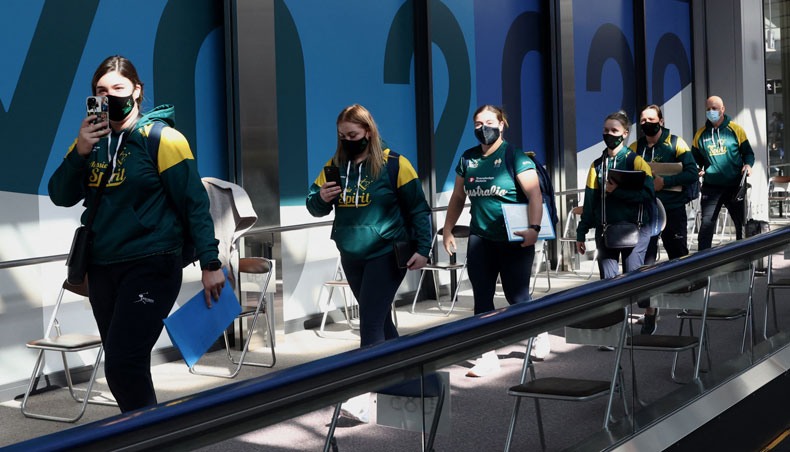 Infectious disease expert Atsuo Hamada still fondly remembers the thrill of the 1964 Tokyo Olympics, but with a month until Japan hosts the Games again, he has concerns.

The journey to this year’s Games has been like no other. After a historic pandemic postponement, organisers refused to pull the plug, despite infection risks, travel restrictions and persistent public opposition.

As the first athletes start arriving, Hamada says the Games must ‘be done in a way that will not bring the virus and variants to Japan.’

‘It will have to be done in a way that will not place extra burden on the medical system,’ he told AFP in an interview.

It’s a delicate balancing act, and some medical professionals still want the Games called off, saying the risks of getting it wrong are too high.

Even Hamada, who makes no secret of his excitement about seeing the Olympics in Japan again, advises caution.

‘The best thing is to ask the public to stay home and watch the Olympics on TV,’ he said.

Organisers have already imposed an unprecedented ban on overseas fans, and on Monday, announced domestic spectators would be limited to 10,000 per event.

They said events could move behind closed doors if the situation worsens, but Hamada wants a stronger commitment.

‘In the worst-case scenario, a cancellation must be considered,’ said Hamada, a professor at Tokyo Medical University.

He cites the recent situation in Osaka city, where dozens of people died from coronavirus as the medical system was overwhelmed.

When the Games were postponed last year, many hoped the pandemic would be over by the opening ceremony this summer.

Instead, even as vaccines roll out internationally, a deadly winter virus wave spread across the globe and highly infectious variants are on the rise.

Organisers have sought to reassure an anxious public with tough countermeasures.

Athletes will be tested daily, and are banned from going anywhere but the Olympic village and their competition venues.

They can only enter the village shortly before their events and must leave within 48 hours of their discipline ending. Over 80 percent of those in the village will be vaccinated, Olympic officials say.

Hamada said those measures ‘should result in a degree of control.’

But he worries about those outside the bubble, including participants like media coming from abroad.

‘Journalists will surely want to report about Japan. Will they obey the rules?’

‘I feel there have to be limits on their movement,’ he said.

Overseas journalists are barred from going anywhere but their hotels and Olympic sites for the first 14 days in Japan, with their movement tracked by GPS.

But Hamada believes more may be necessary, particularly for those coming from countries with high rates of infection or variants of concern.

He suggests they could be placed in a separate bubble, or face more rigorous testing, though any additional measures should ‘be done in ways that are not discriminatory.’

Hamada and other medical experts worry that efforts to keep the Games safe, including regular testing and isolation of suspected cases, could add pressure to the country’s medical system.

To assuage those fears, the International Olympic Committee has offered to bring extra doctors and nurses from overseas, and organisers have pledged to avoid stretching resources.

Hamada warned that Japan must not let the Games slow down its vaccine drive.

‘Japan’s vaccination efforts are making progress, and I do not wish to see them come under pressure,’ he said.

Despite his worries, the specialist is eager to relive the Olympic excitement of 1964.

He was nine when he sat inside the national stadium soaking in the euphoria of the Games, and remembers feeling his local street had been transformed after the world’s top marathon runners pounded past.

‘I still have this feeling inside me that I want to be there again, to experience it again,’ he added.