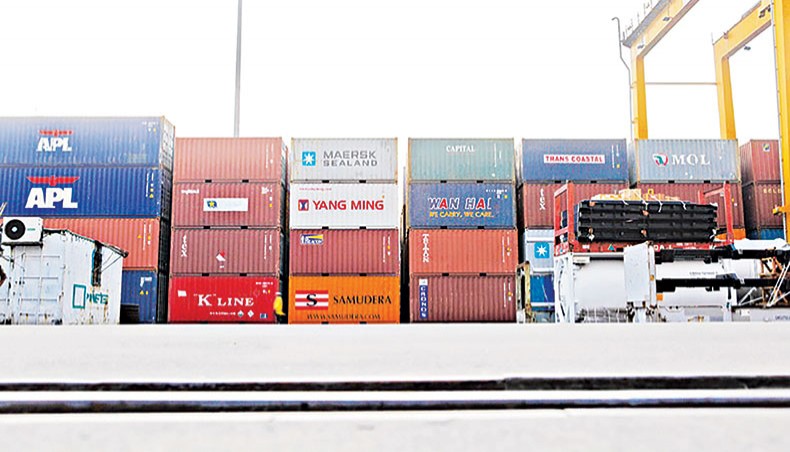 A file photo shows goods-laden containers at the Chattogram port. Experts on Monday said that trade policy options would become limited in exploring new export market access after the country graduates from the LDC status due to high dependence on import revenue in the proposed budget. — New Age photo

Experts on Monday said that trade policy options would become limited in exploring new export markets after the country graduates from the LDC status due to high dependence on import revenue in the proposed budget.

At a post budget discussion titled ‘Budget 2021-2022: Bangladesh Towards a Resilient Future Protecting Lives and Livelihoods’, economists said that in order to achieve the growth target, priority fiscal, financial and trade policy reforms would have to be addressed by future budgets in order to keep flying the flag of economic achievements.

The government estimates one third of revenue to come from import tariff and other taxes and the dependency on imports for revenue seriously compromises trade policy options, PRI research director MA Razzaque said in a presentation.

He said that a very cautious approach to macroeconomic management had to be traded off with options for more proactive fiscal interventions.

‘Without significant measures, including reforms for domestic resource mobilisation and increasing implementation capacities, the national budgeting exercise is unlikely to change,’ Razzaque said.

He said that the spending capacities in the health sector should be strengthened along with the quality of spending and the proposed allocation for social protection must be substantially beefed up.

He observed that Bangladesh’s health spending was the lowest in the world but spending it was apparently a bigger problem.

PRI executive director Ahsan H Mansur said that the government would have to adopt massive vaccination programmes without which, the target of 7.2 per cent growth of gross domestic product cannot be achieved.

He said that the proposed budget was very moderate in size and there was nothing for the new poor people.

Mansur said that the problems of the people who had lost their jobs and incurred losses in business due to the Covid outbreak should be addressed in the budget.

He said that there was a serious problem in the structure of the budget as wages, salaries and pensions were increasing fast.

‘Given the target of 8 per cent average GDP growth during the next three years of the 8th five year plan, every budget should contribute to deepening of the trade and tariff policy reforms to make exports more attractive than domestic sales,’ PRI chairman Zaidi Sattar said.

Protection for local industry was a must but it should not remain in place for an indefinite period, he said.

‘The protection should be time-bound and performance-based as support for indefinite periods makes a sector uncompetitive,’ Sattar said.

In order to achieve 8 per cent growth target of the 8th five year plan, priority fiscal, financial and trade policy reforms will have to be addressed by future budgets in order to keep flying the flag of economic achievements, he said.

MCCI president Nihad Kabir said that the cut in corporate tax was a positive change in the proposed budget and at the same time, the proposed tax benefit would be helpful for the local industry.

She said that the proposed budget for the financial year 2021-22 was not traditional and it was the responsibility of the government to implement the budget efficiently and transparently.

Investors Chamber of Commerce and Industry president Rupali Chowdhury urged the government to reduce the tax rate on the telecommunication sector for the sake of attracting more investment.

She said that the minimum income tax in the proposed budget was a burden for companies which were incurring losses.

Planning minister MA Mannan said that the government was working to ensure justice, fairness and equity in the country.

Regarding the new poor, he said that the problem was temporary as the government had created many new rich and accumulated wealth in the last one decade.

Vaccine was a crucial for the country and Bangladesh would have to procure vaccines for the people, the minister said.

Without naming any names, he criticised the activities of some of the developed and developing countries over the vaccine issue.

Commerce secretary Tapan Kanti Ghosh said that the most of the demands made by the business community were addressed in the proposed budget.

‘Our export is highly concentrated in readymade garments and we are working on product diversification to meet the challenges of post-LDC graduation,’ he said.