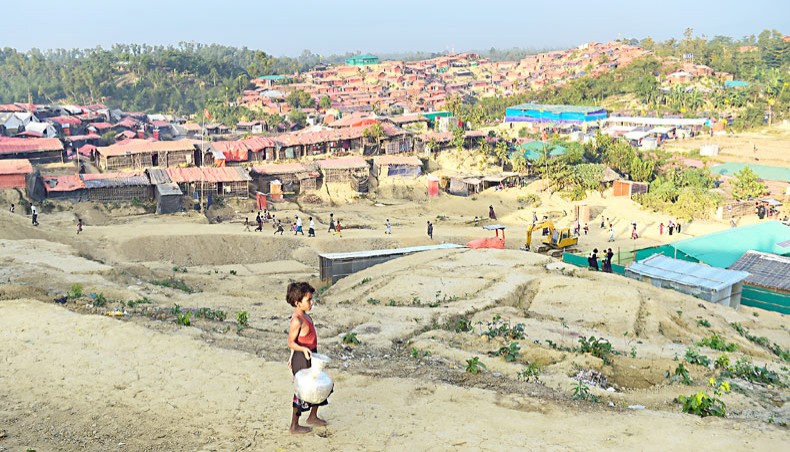 WORLD Refugee Day is observed in the world, including in Bangladesh, on June 20 in order to show solidarity with the refugees from around the world. The day celebrates the strength and courage of the people who have been forced to flee their home country to survive conflict or persecution.

The day is an occasion to build empathy and understand the plights and predicaments of the refugees as well to recognise their resilience in rebuilding their lives.

Established on June 20, 2001, in recognition of the 50th anniversary of the 1951 Convention Relating to the Status of Refugees, World Refugee Day highlights the rights, needs and dreams of the refugees, helps to mobilise political will and resources so that the refugees can not only survive but also thrive. While it is important to protect and improve the lives of the refugees every single day, international days like World Refugee Day help to direct global attention to the struggle of those fleeing conflict or torture.

The day is focused on the power of inclusion. The shared experience of Covid-19 has showed us that we only succeed if we stand together. We have all had to do our part to keep each other safe and, despite the challenges, the refugees and displaced people have stepped up.

On the occasion, the United Nations High Commissioner for Refugees in a message called for supporting refugees across the globe to be protected and included in health care, education and sport.

Those who are forced to flee often struggle to find a doctor when they are sick. Far from home, they struggle to find schools for their children or even a place for them to run around and play. We need to work together with the refugees every day to help them to access these services and build better futures.

Let us unite expand the refugees’ access to primary and secondary health care, sexual and reproductive health, nutrition, and mental health services. It is needed to make sure that the people forced to flee their homes receive the care they need.

The world is witnessing the highest levels of displacement on record. An unprecedented 70.8 million people around the world have been forced from home by conflict and persecution at the end of 2018. Among them are nearly 30 million refugees, over half of whom are under the age of 18. There are also millions of stateless people, who have been denied a nationality and access to basic rights such as education, health care, employment and freedom of movement, said the UNHCR.

According to the UNHCR, every minute 20 people leave everything behind to escape war, persecution or terror. There are several types of forcibly displaced persons. A refugee is someone who has fled his or her home and country owing to ‘a well-founded fear of persecution because of his/her race, religion, nationality, membership in a particular social group, or political opinion’, according to the United Nations 1951 Refugee Convention. Many refugees are in exile to escape the effects of natural or human-made disasters.

Asylum seekers can also be considered as refugees as they have fled their homes as refugees do, but their claim to refugee status is not yet definitively evaluated in the country to which they fled.

Internally displaced persons are people who have not crossed an international border but have moved to a different region from the one they call home within their own country.

Stateless persons do not have a recognised nationality and do not belong to any country. Statelessness is usually caused by discrimination against certain groups. Their lack of identification — a citizenship certificate — can exclude them from accessing important government services, including health care, education or employment.

Returnees are former refugees who return to their own countries or regions of origin after a time in exile. Returnees need continuous support and reintegration assistance to ensure that they can rebuild their lives at home.

Refugees are among the most vulnerable people in the world. The 1951 Refugee Convention and its 1967 Protocol were established to protect refugees. These two are the only global legal instruments explicitly covering the most important aspects of a refugee’s life. According to the provisions, refugees deserve, as a minimum, the same standards of treatment enjoyed by other foreign nationals in a given country and, in many cases, the same treatment as nationals.

The 1951 convention contains a number of rights and also highlights the obligations of refugees towards their host country. The foundation of the 1951 Convention is the principle of non-refoulement. According to this principle, a refugee should not be returned to a country where he or she faces serious threats to his or her life or freedom.

In Bangladesh, at the moment we are dealing with a huge refugee crisis in the world because of the Rohingyas, who came here from Myanmar. In August 2017, a deadly crackdown by Myanmar’s army on the Rohingya community forced hundreds of thousands flee across the border into Bangladesh.

They risked everything to escape a military offensive which the United Nations later described as a ‘textbook example of ethnic cleansing’.

The influx of the Rohingyas into Bangladesh, comparatively a small country with a huge population of its own, has created a massive impact on our overall socio-economic situation.

Aided by the government, different local and international organisations have been working to help to improve the living conditions of the Rohingyas since the influx. These organisations are giving priority to the issue of education, health, nutrition, water, sanitation, hygiene, protection of the women and children along with their rehabilitation.

It is hoped that the day’s objectives would be fulfilled with the combined efforts of all concerned.

Hasina Akhter Huq is the area director of the humanitarian crisis management programme of BRAC.