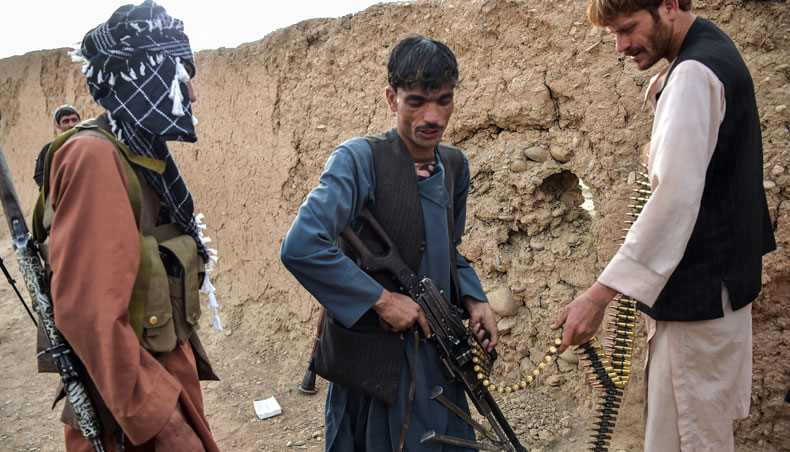 In this photograph taken on March 28, 2021, members of the anti-Taliban ‘Sangorians’ militia take positions during an ongoing fight with Taliban insurgents in the village of Mukhtar, an outpost on the outskirts of Lashkar Gah in Helmand Province. — AFP photo

Afghan president Ashraf Ghani replaced two top ministers charged with managing the country’s faltering security on Saturday, as the Taliban pressed on with their campaign to capture new territory in fierce battles with government forces.

The shake-up of the defence and interior ministry portfolios comes as violence surges and peace talks remain deadlocked, with the Taliban claiming to have seized more than 40 districts in recent weeks across the rugged countryside.

The presidency announced in a statement that General Bismillah Khan Mohammadi, who fought under the late anti-Taliban commander Ahmad Shah Massoud during a 1990s civil war, has been appointed the new defence minister.

Mohammadi has previously held the defence and interior ministry portfolios and also served as the chief of army staff after the fall of the Taliban regime following a US-led invasion in 2001.

Mohammadi replaces Asadullah Khalid who has repeatedly flown out of the country for treatment to wounds suffered after a suicide bomber attacked him in 2012.

The latest cabinet changes, which have to be approved by parliament, come with violence increasing since early May after the US military began the formal withdrawal of its last remaining troops.

US president Joe Biden has set September 11 — the 20th anniversary of the attacks in the United States that led to the invasion of Afghanistan — as the deadline to withdraw American soldiers.

Since the Pentagon commenced the final withdrawal on May 1, the Taliban have unleashed a wave of attacks targeting government forces.

The insurgents claim to have seized more than 40 districts since early May, forcing military leaders to strategically retreat from a number of rural districts.

In one attack at least 20 members of an elite commando unit were shot dead by the Taliban in an ambush in the northern province of Faryab on Wednesday, several officials told AFP.

The Taliban are now present in almost every province and are encircling several major cities – a strategy the militants employed in the mid-1990s when they overran most of Afghanistan until they were ousted by invading US-led forces.

On Saturday, the defence ministry confirmed that government troops had retreated from several districts but said they aimed to take them back.

‘There is a new, robust and effective plan to retake areas from which we have pulled back our forces,’ ministry spokesman Rohullah Ahmadzai said, dismissing claims that hundreds of soldiers had surrendered to the Taliban.