Cricket’s David and Goliath face off in WTC final 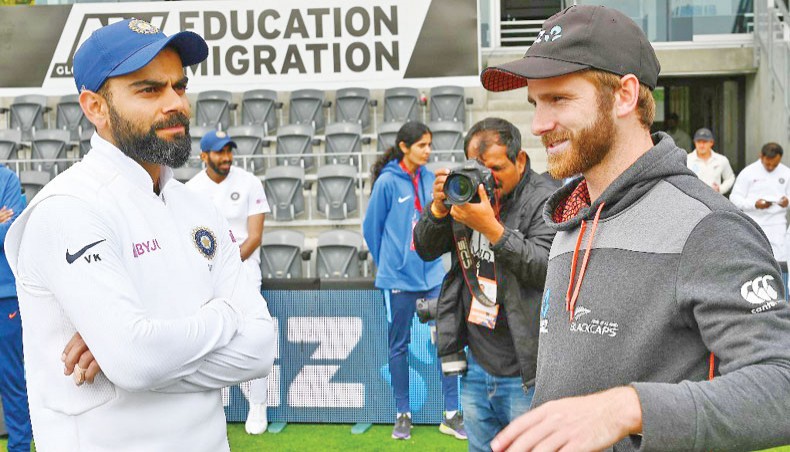 India face New Zealand in the inaugural World Test Championship final on Friday in a match that could have a profound influence on cricket globally.

New Zealand are battle-hardened thanks to a 1-0 series win against England completed on Sunday with a dominant eight-wicket win at Edgbaston after a draw at Lord’s.

‘Ideal preparation, having two Test matches against England in these conditions,’ said experienced New Zealand batsman Ross Taylor ahead of the five-day match in Southampton, on England’s south coast.

‘Couldn’t think of anything better.’

The Blackcaps, who won in Birmingham despite making six changes, are set to welcome back captain and star batsman Kane Williamson and pace spearhead Tim Southee.

Many cricket fans around the world would be happy to see New Zealand, a country with a population of around five million, compared with India’s 1.3 billion, win a major global title after their agonising Super Over loss to England in the 2019 50-over World Cup final at Lord’s.

There is also widespread admiration for the way a well-balanced side has made the most of slender resources.

India have not played a competitive game since the end of March and have had to make do with an intra-squad practice match while undergoing quarantine.

But they proved their strength in depth when an injury-hit side recovered from the humiliation of being dismissed for 36 in the first Test in Australia to win a four-match series 2-1 with a sensational chase in Brisbane in January -- and that without inspirational captain Virat Kohli.

The gifted batsman is now back in charge of a side that also features Rohit Sharma and Ajinkya Rahane as well as spinner Ravichandran Ashwin, with a pace attack led by Jasprit Bumrah.

‘India’s batting depth is the envy of the cricketing world,’ India great Sunil Gavaskar, one of cricket’s most outstanding opening batsmen, told AFP.

Rahane said the mental approach would be key to India’s success.

‘I think what is important in this Test match is playing with freedom, playing fearless cricket as a team and backing each other. That will really help us rather than thinking about the result.’

That the World Test Championship final, which comes after two years of series to determine the finalists, is taking place at all is something of a triumph for the International Cricket Council.

It seemed the sheer complexity of a congested global calendar meant the first attempt to crown a global Test champion since the 1912 Triangular Tournament featuring England, Australia and South Africa would not get off the drawing board.

First suggested in 2008, the concept almost foundered because of broadcasters’ concerns that India, cricket’s economic powerhouse, would fail to make the final, while many countries were far from enthused by the concept.

But the competition did get going eventually, although not helped by an initially complicated points system designed to reflect the varying numbers of Tests played by different nations, partly as a result of the Covid-19 pandemic.

Cricket chiefs settled on a method of percentage of points won rather than total points.

The financial ramifications of the match could extend well beyond the $1.6 million on offer to the winners and the $800,000 collected by the runners-up.

When India win an ICC event for the first time it tends to have a transformative effect on cricket as a whole.

India’s triumph at the 1983 World Cup changed their attitude to one-day internationals, with those matches becoming the financial motor both of its own cricket and the world game

And the T20 revolution that led to the lucrative Indian Premier League, was ushered in by India’s victory over arch-rivals Pakistan in the inaugural 2007 World Twenty20 in South Africa.

At a time when many fear for Test cricket’s long-term future, if India become world champions it could be a significant boost for the sport’s oldest international format.