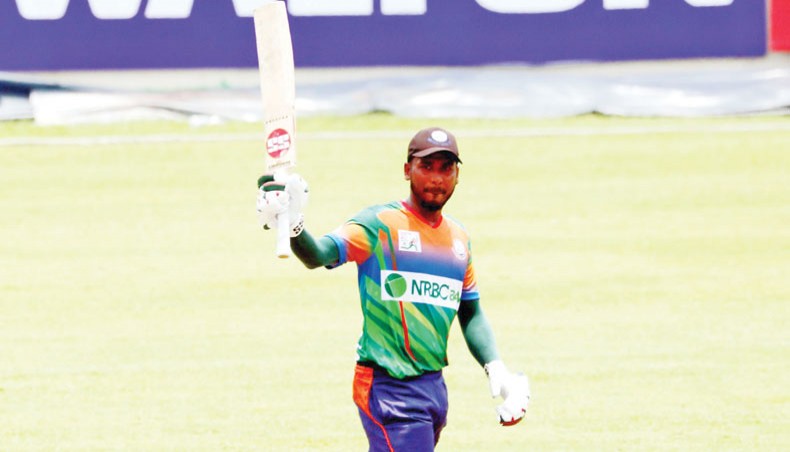 Brothers Union opener Mizanur Rahman lit up the final day of the opening phase of the Dhaka Premier League by bringing up the first century of the running season against Sheikh Jamal Dhanmondi Club at BKSP on Thursday.

Mizanur struck an unbeaten 100 off 65 balls with the help of 13 fours and three sixes to reach his first century in competitive Twenty20s.

Despite Mizanur’s spectacular knock, Brothers reached 133-2 after 17 overs, when rain halted proceedings and didn’t allow the game to resume.

Rain played spoilsport in the other two matches held at BKSP, as the matches between Prime Doleshwar Sporting Club and Old DOHS Sports Club, and Shinepukur Cricket Club and Partex Sporting Club also ended as a no result.

Khelaghar posted a mere 68-5 in their allotted overs after opting to bat first with opener Shahriar Komol top-scoring with an unbeaten 31 off 25 balls.

Opener Rony Talukdar’s quickfire 39 off 19 deliveries set the tone for Prime Bank and helped them reach 74-5 in 9.1 overs.

Legends of Rupganj, who had to win to avoid finishing in the bottom three, lost against defending champions Abahani Limited five wickets.

In reply, Abahani found itself in a tricky position, as it required 51 runs off the last 29 balls with half of its side back in the pavilion and two new batsmen in Mohammad Naim and Mohammad Saifuddin at the middle.

The six teams will play one match against each other in the Super League and at the end of it the team with the most points will be crowned DPL champions.

On each match day three games are going to take place and the matches will be televised live by T Sports and Gazi TV.

The bottom three teams, Rupganj, Old DOHS and Partex will compete in the Relegation League, from which two teams will get relegated.