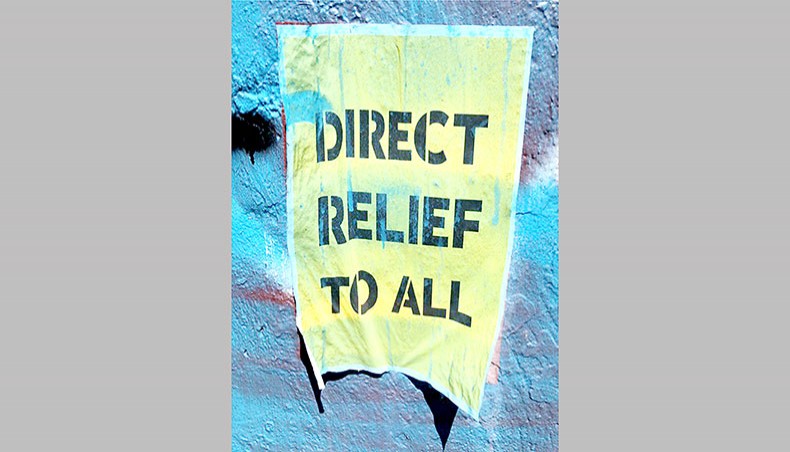 Thanks to the wonders of global capitalism, globalisation, neoliberalism and adjacent ideologies, we live in a world where nearly half of humanity is forced to scrape by on less than $5.50 a day — roughly the price of a Big Mac in the United States. Worse, during the last 40 years — around the same time neoliberalism was introduced — the wealthiest one per cent more than doubled their income, leaving the rest behind. Still worse, the global elite (one per cent) cause twice as much carbon as the bottom half of the world.

During the coronavirus pandemic, billionaires’ wealth has increased by a staggering $3.9 trillion — a whopping $3,900,000,000,000 — between March 18, 2020 and December 21, 2020. By January 2021, their wealth stood at an unimaginable 12 trillion dollars. This Tsunami-like vacuuming up of wealth — camouflaged through the ideology of trickle-down economics — meant that by September 2020, Amazon boss Jeff Bezos could have paid all of his 876,000 workers $105,000 as a bonus and still be as wealthy as he was before the pandemic.

Simultaneously, it is estimated that the total number of people living in poverty could have increased between 200 and 500 million during the first year of the coronavirus pandemic. Meanwhile, for most of humanity, there has never been a permanent exit from poverty and insecurity. The coronavirus pandemic has made things worse.

The global pandemic has made matters notably worse for people living in poverty. Their lives got far harder compared to the rich. The acceleration of misery that came in the wake of the coronavirus pandemic has predominantly severely impacted six groups: a) women, b) Asians, Hispanics, etc, c) afro-descendants, d) indigenous peoples, e) the historically marginalised, and f) those living in oppressed communities around the world.

Apart from these groups, children also suffered. More than 180 countries temporarily closed schools. This left close to 1.7 billion children and young people out of school when global school closures were at their peak in 2020. As in wars and natural catastrophes, children suffer.

Yet, the coronavirus pandemic exposed inequalities in the global labour system. For example, while 90 per cent of US workers in the top one-fifth of the income scale have a right to paid sick leave, only 47 per cent of the bottom one-fifth do so. Moreover, the impact of the coronavirus pandemic on workers during 2020 showed that workers at the bottom of the income scale suffered more than those at the top.

A simple tax on the excess profits earned by corporations during the coronavirus pandemic could generate $104 billion. This would have been enough to provide unemployment protection for all workers as well as financial support for all children and the elderly in the poorest countries.

Yet governments in rich countries choose to prop up companies and corporations rather than help humanity. We know this from the global financial crisis of 2009. Almost all government follow the motto: never let a serious crisis go to waste. The coronavirus pandemic provides good reasons for neoliberal states and their henchmen to help corporations more instead of assisting workers.

Even more in goose-step with neoliberalism are governmental tax policies often deliberately engineered by neoliberal states to favour the rich and corporations. Between 2007 and 2017, pre-COVID-19 tax arrangements in one hundred countries systematically favoured corporations, often at the expense of workers. In those years, corporate tax declined by roughly 10 per cent, while wealth tax declined by about one per cent. At the same time, workers’ income tax increased by 13 per cent, and so did payroll tax. Finally, flat taxes on goods and services increased by 10 per cent globally.

In short, corporations and the wealthy pay about 17 per cent of all taxes. The rest falls increasingly onto workers. It seems as if corporations and the wealthy have withdrawn from sharing the burden when it comes to taxation. Apart from profit maximisation — often euphemistically called shareholder value — on which either no tax at all is paid or very minimal tax is paid, taxation has been another way of vacuuming wealth upwards to the global rich and corporations.

Meanwhile, we are told that the economy will raise all boats. But, in reality, super-yachts are getting ever larger while most people in our world sit in tiny inflatable rubber dinghies struggling to keep afloat, particularly during the coronavirus pandemic.

Simultaneously, companies and corporations have also used their political lobbying to shape policy responses to the coronavirus pandemic in their favour. Unsurprisingly, this was rather successful and has led to the fact that many mega-corporations saw their profits soar even further.

During the coronavirus pandemic, the top 25 US corporations were well on course to earn 11 per cent more profits in 2020 compared with the previous year. At the same time, small businesses in the United States were likely to lose well over 85 per cent of their profits in the second quarter of the year 2020. This is further testimony to the ideology that neoliberal and right-wing populist parties support small business. They do.

This works globally, or at least in countries where capitalism is forced to find a way to live with democracy. For example, in the first half of 2020, billionaires in the Middle East and North Africa still managed to boost their wealth by a staggering 20 per cent. Meanwhile, in the United Kingdom, the wealthiest 20 per cent of people still managed to save $30 billion — accumulating more wealth. Simultaneously, lower-income households have fallen into debt during the lockdown.

While the world’s top billionaires are getting richer and richer, unbothered by the coronavirus pandemic, billions of people who live in poverty have become even poorer. In times of crisis, many of the global poor are forced to sell assets like bicycles and livestock, often at giveaway prices. This leaves them far less able to recover from the coronavirus pandemic once the pandemic is over. It exasperates the poverty trap. Worse, this is likely to persist for decades to come. Of course, all this also applies to the roughly 740 million people who work in the informal economy.

As expected, the coronavirus pandemic resulted in the following: high-income OECD countries with a history of neoliberalism and austerity, which, of course, leads to very hefty cuts in health spending, have experienced higher COVID-19 mortality rates than those countries that did not follow the ideology of neoliberalism and austerity. Any first-year undergraduate student in political economy would have predicted that.

Whether following neoliberalism or not, in March 2020, EU states found that they need a staggering ten times more equipment to cope with the coronavirus pandemic than was available. So perhaps some countries should not have adopted managerialism’s ideology of lean management where just-in-time systems run-down stock to the absolute bare minimum.

At the same time and in several countries, the debt burden and the legacy of austerity measures and structural adjustment programmes have hollowed out public spending and health systems. As a result, some 90 per cent of countries reported disruptions of essential health services in the first six months of the pandemic.

Unsurprisingly, COVID-19 mortality in the most deprived 10 per cent of areas in England was twice that of the least deprived 10 per cent — the poor suffer, and the rich don’t. It leads to the somewhat blasphemous question: weren’t those the areas that voted most heavily for Brexit in the hope that Brexit will bring 350 million pounds per week to the British National Health Service just as Boris Johnson promised? Not so long ago, it was reported that ‘UK’s saving after Brexit even bigger than 350 million pounds, Johnson says’. Later Bojo claimed, ‘There was an error on the side of the bus’.

Of course, the central Brexit claim was just an error on a bus! Yet what might not have been ‘an error on a bus’ was BoJo’s claim that bodies will pile up high during the coronavirus pandemic. The bodies did indeed pile up. But, as always, they did so more in Britain’s poor areas than in its affluent areas where the Eton educated elite like BoJo lives.

Yet, post-Brexit United Kingdom was not alone when it came to poor people dying disproportionally due to COVID-19. Similar trends have been reported from France, Brazil, Nepal, Spain and India. The fact that the poor perish discretionally is a global phenomenon. The global rich-poor divide also came to the fore in other areas. A relatively small group of wealthy nations, representing a low 14 per cent of the world’s population, has bought more than 50 per cent of the global supply of vaccines.

Their global corporations, particularly their big pharma corporations, also seem to operate under the aforementioned motto: never let a good crisis go to waste. During the first year of the coronavirus pandemic, pharmaceutical corporations made huge profits. Pfizer’s stocks, for example, soared 15 per cent after its November 9 announcement that its vaccine was highly effective. It follows the well-established pattern of capitalism: some get rich — some die.

Among those who die are many of the four billion people — more than 50 per cent of the global population — who aren’t covered by social insurance and received next to no assistance when the coronavirus pandemic hit. One way of protecting themselves against the coronavirus is the ability to work from home. But, again, workers at the upper level of the income ladder did better than those at the bottom who were more often than not unable to work from home.

In the European Union, for example, 74 per cent of the highest-paid employees were able to work from home even when this meant the bedroom or the kitchen table. Meanwhile, only three per cent of the lowest-paid workers could escape to the security of their own home. Moreover, informal workers — domestic workers, street vendors, delivery drivers, and construction workers — experienced significant distress due to the coronavirus pandemic. Globally, 61 per cent of workers are in informal sectors.

Globally, about one out of 10 people go to bed hungry. Simultaneously, the world’s largest food and beverage corporations paid over $18 billion to their shareholders between January and July 2020. As said before: some get rich — some die. This is capitalism. During the pandemic, the menace of hunger has spread even to middle-income countries such as India and Brazil.

Simultaneously, even in a so-called high-income country like the United States, about 30 million adults or 12.1 per cent of all adults reported in July 2020 that their households had sometimes or often not had enough to eat in the previous seven days.

Finally, what people need during the coronavirus pandemic are nurses. Perhaps what they do not need so much are asset managers. Yet, in an average year in the UK, a newly qualified nurse earns around 22,000 pounds annually. By comparison, a top-rated asset manager takes home about 31,000,000 pounds, or 1,400 times more than the life-saving nurse. So some might ask, does capitalism reward the right people?