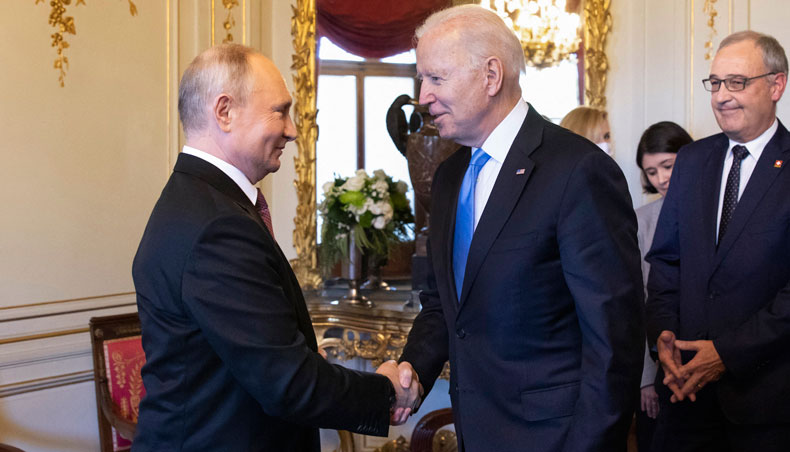 US president Joe Biden shakes hands with Russian president Vladimir Putin prior to the US-Russia summit at the Villa La Grange, in Geneva on June 16, 2021. — AFP photo

US president Joe Biden delivered a stern warning on Wednesday to Russian leader Vladimir Putin over ransomware attacks emanating from Russia, saying he was prepared to retaliate against any more cyber assaults on American infrastructure.

Speaking after the two leaders’ first summit in Geneva, Biden said he laid down the line on Moscow not taking action against hackers who have extorted hundreds of millions of dollars from western governments, companies, and organisations from the safety of Russian soil.

‘I pointed out to him we have significant cyber capability and he knows it,’ Biden said in a press conference after their talks.

‘He doesn’t know exactly what it is, but it’s significant. If in fact they violate these basic norms, we will respond,’ he added.

In a separate press conference following the three-and-a-half hours of discussions, Putin rejected the allegations and insisted that the United States itself was behind a large number of cyber-attacks.

But he acknowledged that the issue was ‘extremely important’ and said the two sides agreed to hold formal consultations on it.

‘We need to drop all insinuations, sit down at an expert level and start working in the interests of the US and Russia,’ Putin said.

Experts say Russia and neighbouring countries have become the hub of what is called ‘ransomware-as-a-service,’ in which different groups work together to hack and then export a target, promising to free up blocked computers after being paid off.

Washington officials don’t believe the Russian government is directly involved, but say it harbours hackers that should be arrested.

‘There is a lot of ransomware activity that is coming from within Russian borders, which isn’t being conducted by Russian government officials, but is being tolerated by the Russian government,’ Assistant Attorney General John Demers told a conference held by the Cyberscoop media group on Wednesday.

‘They’re not just tolerating this; they are actively getting in the way of US law enforcement efforts to combat this type of hacking,’ Demers said.

The subject was ripe for discussion at the Geneva summit after Russia-based hackers hijacked the computers of a major US oil distribution network, Colonial Pipeline, on May 7 and demanded millions in ransom.

Weeks later, a different group of Russian hackers did the same with JBS, one of the world’s biggest meat processors, which paid $11 million in bitcoin to regain control of its IT systems.

Both hacks had significant economic impact in the United States: Colonial was forced to shut down fuel pipelines, forcing gas prices to soar, and beef prices rose as JBS had to curtail production.

Biden has fielded political criticism domestically for not taking any visible action in retaliation, though the US military’s Cyber Command declines to make public any actions it takes against adversaries.

The US leader said he delivered to Putin a list of 16 areas of crucial infrastructure like energy and water that are ‘off limits’ to attack, drawing a red line for Moscow.

‘I looked at him and said, ‘How would you feel if ransomware took on the pipelines from your oil fields?’ He said it would matter,’ Biden said.