Germany must ‘crank it up’ against Portugal 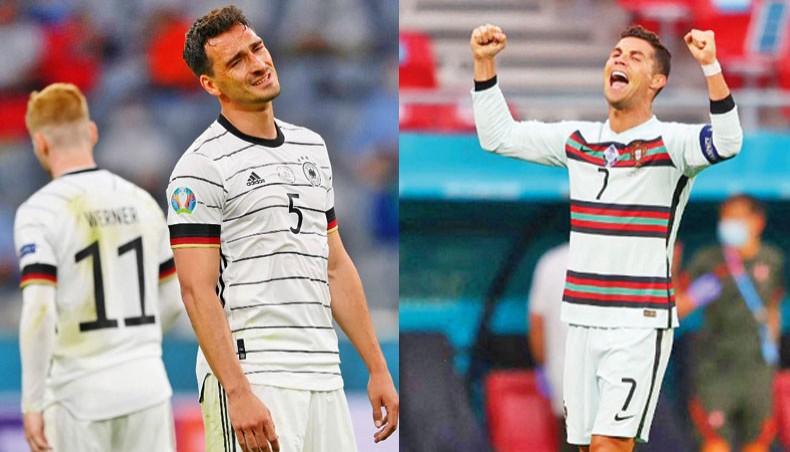 Germany defender Mats Hummels (L) reacts after scoring an own goal against France in Munich  while Portugal forward Cristiano Ronaldo (R) celebrates at the end of their Euro 2020 match against Hungary in Budapest on Monday. — AFP photos

Germany head coach Joachim Low says his side must ‘crank things up’ ahead of Saturday’s Euro 2020 clash against Cristiano Ronaldo’s Portugal after an opening defeat against France.

The Germans lost 1-0 to the world champions in their Group F opener in Munich on Tuesday, courtesy of a Mats Hummels own goal.

The scoreline flattered the home side as Kylian Mbappe and Karim Benzema had second-half goals disallowed, while Adrien Rabiot hit the post for the French.

Germany’s defence showed signs of improvement, having leaked 20 goals in their previous 13 games, but the main concern is up front, where Thomas Muller, Serge Gnabry and Kai Havertz mustered just one shot between them.

‘It’s up to us to crank things up in the next two or three days,’ said Low. ‘We have to look to improve, because we need a goal or two.’

Hummels said on Instagram the defeat ‘hurts us a lot and me especially, because my own goal decided the game,’ but the centre-back said the focus was now on beating holders Portugal in Munich.

Despite having more possession, running four kilometres more than the French as a team and completing nearly twice as many passes, Germany came up short.

The second-half introduction of Timo Werner and Leroy Sane was not enough to turn the tide.

‘The substitutes didn’t get into the game as well as we had hoped,’ said Low. ‘But France are strong. They sat very deep after the lead and didn’t give us much space.’

Midfielder Ilkay Gundogan, Manchester City’s top-scorer last season, said it was important for Germany to create more chances against Portugal, who won their opener against Hungary 3-0.

There is talk of the Germans abandoning their three-man defence, with two wing-backs, in favour of a back four to push forward with an extra player in midfield.

‘We have two systems that we can both play well,’ said Gundogan.

Low’s Germany team are still haunted by the trauma of finishing bottom of their group at the 2018 World Cup and fans fear a similar outcome at Euro 2020.

Beating Portugal would ease the pressure and provide a much-needed confidence boost.

‘When you lose the first game, and have three group matches, the pressure is high -- there is no need to discuss it,’ Toni Kroos said bluntly.

Portugal are top of the table after Ronaldo scored twice in Tuesday’s win over Hungary to become the all-time top-scorer at Euro finals, with 11 goals.

All three goals in Budapest came in the last 10 minutes, testimony to Hungary’s dogged defending, but the holders expect an even tougher match against the Germans.

‘Now it’s about Germany and we must keep improving,’ said Portugal coach Fernando Santos. ‘‘Kill or be killed’, as (ex-Brazil and Portugal coach Luiz Felipe) Scolari used to say.’