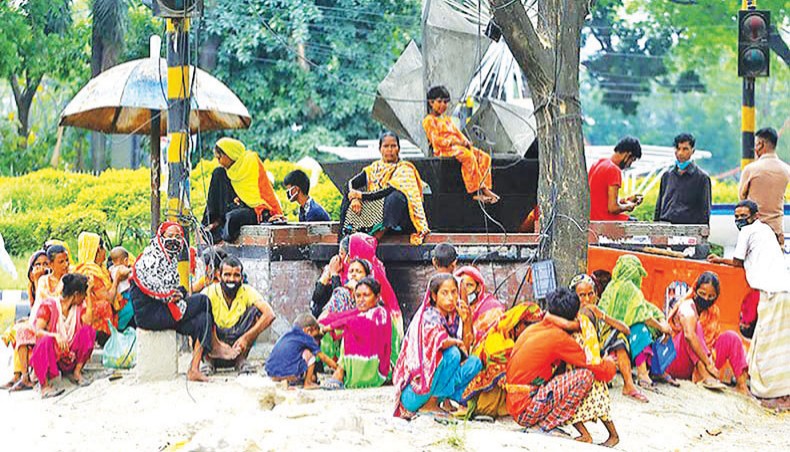 A file photo shows relief-seekers waiting on a street island near the National Press Club in Dhaka as the COVID-19 outbreak pushed the poor to streets to receive food from donors. Extending the minimum wage to domestic workers could contribute to reducing wage inequality by 51.8 per cent in Bangladesh, according to an International Labour Organisation report. — New Age photo

Extending the minimum wage to domestic workers could contribute to reducing wage inequality by 51.8 per cent in Bangladesh, according to an International Labour Organisation report.

The report ‘Making decent work a reality for domestic workers: Progress and prospects 10 years after the adoption of the Domestic Workers Convention, 2011’ published on Tuesday said domestic workers in Bangladesh are excluded from the minimum wage coverage and they have no limitation of working hours.

The report found that the rights of domestic worker in Bangladesh were largely ignored as the labour force remained excluded from the scope of the county’s labour laws.

China accounts for the highest 22 million domestic workers while the position of Bangladesh is the fourth with 1.5 million workers, it showed.

According to the report, the domestic workers in Bangladesh have no entitlement to weekly rest and they are excluded from the provision of paid annual leave.

The ILO report also found that the domestic workers in Bangladesh had no entitlement to maternity leave and maternity cash benefits.

According to the report, domestic workers are among those worst hit by the consequences of the on-going COVID-19 pandemic.

‘More domestic workers than other employees have lost their jobs or are seeing a dramatic reduction in working hours and correspondingly lower wages,’ the report said.

The ILO said that 10 years after the adoption of an historic ILO Convention that confirmed their labour rights, domestic workers were still fighting for recognition as workers and essential service providers.

Working conditions for many have not improved in a decade and have been made worse by the COVID-19 pandemic, according to the report.

Domestic workers are more vulnerable to the fallout from the pandemic because of longstanding gaps in labour and social protection.

The Covid fallout particularly affected the more than 60 million domestic workers in the informal economy across the world, the ILO said.

‘The crisis has highlighted the urgent need to formalise domestic work to ensure their access to decent work, starting with the extension and implementation of labour and social security laws to all domestic workers,’ said ILO director-general Guy Ryder.