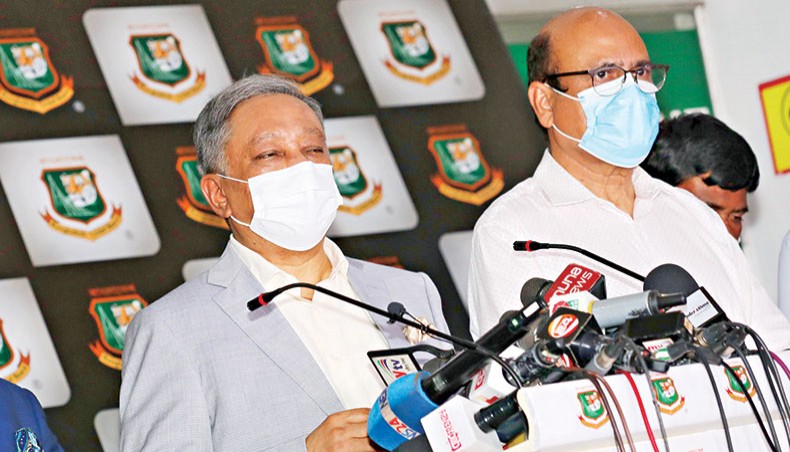 Bangladesh Cricket Board president Nazmul Hasan speaks during a press briefing at the end of a board meeting at Mirpur on Tuesday. — BCB photo

Bangladesh Cricket Board is going to form a shadow national team to have a ready reserve of players to choose from when replacements are required and also to rehabilitate the cricketers who get dropped from the national team, said board president Nazmul Hasan.

The 10th board meeting of the BCB directors was held at the board office inside Sher-e-Bangla National Stadium in Dhaka on Tuesday and after the meeting, Nazmul briefed the media about the key outcomes.

Like England Lions or Ireland Wolves, the BCB is also going to form a shadow national team called ‘Bangladesh Tigers’ who will serve as the immediate backup for the national team.

‘We will form a shadow national team called Bangladesh Tigers. Throughout the year they will undergo training with the local coaching staff, who will follow clear instructions from the head coach. It is to ensure readymade players for the senior team, for whichever position and specialization,’ Nazmul told the media in Mirpur.

The BCB president was expected to approve the new list of central contracts for the men’s national team in the meeting but he said that he will give his final consent after hearing cricket operations committee’s explanation on the proposed inclusions and expulsions.

‘Men’s central contract has 18 or 20 names, but we have sought one or two clarifications, after which they can give you the full list,’ Nazmul said.

Nazmul also said that they will also ask the players if they want to play in the format they are assigned to in the contract to avoid any complication in the future.

‘We are yet to know from the players about which format they want to play in. We will be in trouble if we put out a list but they don’t agree to play in a particular format,’ he added.

Nazmul also declared that for the first time 22 women cricketers will come under central contract with the BCB and their tenure will run till the end of 2021.

Nazmul also spoke on the accusations of biased umpiring in this year’s Dhaka Premier League but said that they are yet to receive any complaints on the matter from the participating clubs.

‘We investigated all the match referee reports from every game, but didn’t find any complaints. We spoke to all 12 clubs including their captains. None of them raised any questions about umpiring in this tournament. They have said this is one of the best tournaments.

‘But it doesn’t end here. We have asked the committee to do some additional work. Perhaps we can tell you something more later,’ he added.

The BCB president also cleared that Bangladesh is not bidding to host a Twenty20 World Cup due to venue limitations and instead are working to co-host an ICC Champions Trophy event with other South Asian countries.

In the meeting, it was decided that the tenure of the national selectors will be extended till this year’s T20 World Cup.